To Be Or Not To Be? On the 65th UN Anniversary 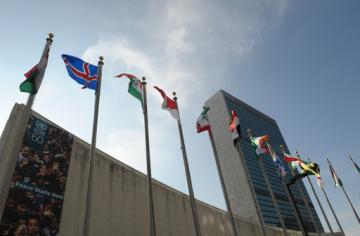 Nevertheless, it is clear that these days the UN is in crisis and is unable to play the leading role in ensuring international peace and security. The perilous tendency of the past 10-15 years is that the UN is increasingly losing credibility, and that, moreover, responsibility for the process rests with the organization's own bodies rather than with any external forces. There are serious reasons to assume that the key UN institutions are deliberately eroding the UN credibility. In the past, the UN inability to handle serious international crises used to be limited to isolated cases. For example, UN resolutions condemning the apartheid in South Africa were for a period of time torpedoed by the outside supporters of the republic's regime, and in 1999 the UN did not recognize the air strikes against Yugoslavia – to which at least it never gave consent - as an aggression because the aggression was launched by permanent members of the UN Security Council. The situation changed fundamentally over the past decade, and now we witness aggressions being blessed or even instigated by the UN and its Security Council. The UN sanctioned the attacks against Iraq and Afghanistan and currently subjects to arm-twisting defiant countries like N. Korea and Iran.

The problem has deeper roots than the imbalance of diplomatic power in the world or the divisions within the UN Security Council. The main UN institutions are growing strikingly inadequate and morally corrupt, the result being the UN undermining its own credibility. The process may be driven by a handful of UN-member countries, but the broader UN majority is left extremely discontent.

The International Court of Justice is one of the UN bodies whose credibility is evaporating, and, again, this happens to be the Court's own fault – or, rather, that of the representatives of the countries holding prevalent positions in it. The Yugoslavia against NATO, Bosnia against Serbia, and Georgia against Russia cases – and, notably, the Court's 2010 advisory opinion on the independence of Kosovo are vivid examples of the deplorable trend.

The first indications of the Court's drift towards revisionism in the international law surfaced in the 2002 Cameroon against Nigeria case. At that time, the Court produced a ruling de facto based on the legitimization of the colonization of Africa and somehow overlooked the plight of several thousands of Nigerians passed under Cameroon's control by its decision along with the contested territories.

Shielding the NATO countries from responsibility in the 2001-2006 Yugoslavia against NATO case, the Court invented the argument that it lacked the jurisdiction over the situation considering that Yugoslavia was not a UN member. Oddly enough, the same argument was rejected when Yugoslavia was condemned in the Bosnia against Serbia case.

The Court sanctioned the five nation's exclusive right to nuclear warfare based on the statement that the international law carried no norms banning or legalizing the use of nuclear weapons. This year, however, the Court did uphold the self-proclaimed Kosovo independence with a reference to the concept that the absence of norms prohibiting a particular step means that the international law affords it. In the light of the above paradox, the Court can no longer expect to be taken seriously.

The truth is that unconvincing arguments and decisions in favor of the stronger at the expense of the weaker could be encountered in the Court's practice in the past, but cases could as well be cited where the opposite was true. Nicaragua, for example, won a case against the US in the International Court of Justice. Similar rulings are unthinkable at present and the arguments the Court is churning out nowadays simply inflict disgrace upon it.

Casting doubts on the credibility of opponents is a natural first move to expect from the forces of destruction. At the moment we see extensive efforts aimed at making the countries which are not represented in the UN Security Council and the Court of Justice believe in the moral collapse of the two institutions. Some form of response is needed to neutralize the attempts to ruin the entire existing system of the international security. It is time to prove that the activity of the US, Great Britain, and a number of other influential Western countries targeting the UN credibility hurts both the interests of the international community as a whole and those of the countries' own peoples. The forces seeking to discredit the UN are promoting nothing other than the interests of international corporations which are invariably at odds with national sovereignty as a general principle.

The UN anniversary is the right time to stress that the unique international organization should be preserved.