Tobolsk - the heart of Siberia 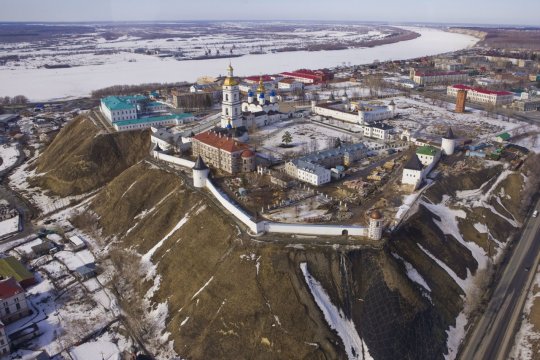 Tobolsk is one of the oldest cities in the Urals and Siberia, the birthplace of many famous people, including the chemist Dmitry Mendeleyev, painter Vasily Perov, composer Alexander Alyabyev and many others. It is also the place where Decembrists Ivan Annenkov, Wilhelm Kuchelbecker, Alexander Muravyov, Mikhail Fonvizin, as well as the writer Alexander Radishchev, the statesman Mikhail Speransky, Russia’s first portrait painter Ivan Nikitin, were exiled. Tobolsk is also where the deposed Emperor Nicholas II and his family lived in exile from August 13, 1917 until April 13, 1918.

Tobolsk is also famous for its amazing architectural and historical monuments, above all the Tobolsk Kremlin. The wealth of unique landmarks has earned the city the title of one of the premiere tourist centers of the Urals and Siberia.

It was with the idea of breathing new life in the status of Tobolsk by involving as many local citizens and people both in and outside Russia in this great effort that the Tobolsk Revival Foundation was created 25 years ago.

The Tobolsk Revival Foundation’s key publishing project, the “Tobolsk and All Siberia” almanac, is dedicated to the epic development and transformation of the Urals, Siberia and the Far East. The books making up this monumental project, which has already been published 30 times, span a giant continent, stretching from the Ural Mountains to the shores of the Pacific Ocean, and from the Arctic Ocean to the Mongolian steppes and China. They are about Tobolsk, Tyumen, Irkutsk, Krasnoyarsk, Tomsk, Kurgan, Beryozov, Tara, Yakutsk, Kamchatka, Biysk, Barnaul, Narym, Omsk, Ugra, Tara, Kurgan and Ishim.

The almanac also features some absolutely unique sections, which look at the  history of the Siberian Cossack troops, the great river Ob, a 10-volume military-patriotic series, giving the reader good and truthful insight into the major battles of the Great Patriotic War, the heroic and dedicated job done by the workers of the labor front.

It also contains a four-volume literary, documentary and historical collection about the great Northern Sea Route, as well as a two-volume tome devoted to the ties, which have traditionally existed between Belarus and Siberia.

“The Library of Tobolsk and All Siberia” almanac, also published by the Foundation features works by the famous Russian traveler, geographer, ethnographer, writer and researcher of the Far East Vladimir Arsenyev, the remarkable Russian poet, writer, historian, geographer, traveler, archivist and ethnographer Sergei Markov, the amazingly profound and lyrical writings by the 19th century Tobolsk poet Yevgeny Milkeyev, works by the  “King of Siberian Writers” Anton Sorokin; of modern-day authors Boris Vasilevsky, Sergey Zaplavny and Mikhail Trofimov, well known for their much-acclaimed works about Siberia. And last, but certainly not least, the “Library…” features works by Russia’s world-famous literary classic Valentin Rasputin, to whom the "Library of Tobolsk and All Siberia" owns its name.

And the veritable jewel of the whole series is the anthology of Siberian poets aptly titled "The Word of the Mother."

Creative activity always gives rise to new ideas, and the “Siberian Art Museum” book series is certainly one such idea as it aims not only to present a huge layer of Siberian art in a national context, but also to preserve it for posterity. It is essentially a mega-museum in print. Here the Foundation offers the readers an insight into the history of Siberian fine arts through the work of the most important artists of the past and present, unique Siberian art crafts and museum collections.

This is a one-of-a-kind publishing project designed to familiarize readers with the works of people who are creating the artistic image of Siberia.

These publications are universally recognized masterpieces of book art, which have won the top awards of the Russian Academy of Arts, the Association of Book Publishers of Russia as well as of various national and international book fairs. Indeed, the Tobolsk Revival Foundation is giving back to the book the status of a work of art, a cultural monument, while simultaneously making it accessible to everyone.

Of particular note here is the reprinting of the works by the great architect, chronicler and philosopher Semyon Remezov, of the "The Atlas of Irregular Cossack Troops," of “The Return of Tobolsk” fully engraved books by the writer Valentin Rasputin and the artist Nina Kazimova, of “The 20 Names of the Tobolsk History,” of books by children’s writers, and of photo albums.

The Tobolsk Revival Foundation is also promoting the installation of monuments and memorial plaques. During the 1990s, memorial plaques were unveiled dedicated to Dmitry Mendeleev in Tobolsk and in the Upper Aremzyans, to Alexander Alyabyev at the local art school, to Semyon Remezov and to the family of Emperor Nicholas II.

The “Yermakovo Pole” landscape park ecological project being implemented by the Revival of Tobolsk Foundation is a graphic example of a charitable organization working to save the unique natural zones of the Tyumen region.

In 2013, the Tobolsk Revival Foundation established, with help from the city authorities, a national prize and an eponymous medal bearing the name of Fyodor Konyukhov, “the Russian knight, enthusiast, writer, artist and pilgrim,” awarded for achievements in various areas of life and for heroism, courage and fortitude. It was established with an eye to encouraging people’s interest in fellow compatriots, whose ascetic work, talent and actions serve as an example of selfless service for the good of Russia. The prize is awarded annually in Tobolsk on the Foundation’s birthday, on February 27.

Another project being successfully implemented by the Tobolsk Revival Foundation is a readers’ marathon dedicated to Pyotr Yershov’s timeless fairy tale, “The Humpbacked Horse,” organized together with the city administration. On June 1, 2014, schoolchildren and students, workers and housewives, teachers and museum workers, officials and business people, all those who cherish the memory of their great countryman and his immortal creation, read “The Humpbacked Horse”. The event encouraged similar reading marathons dedicated to Alexander Pushkin, Ivan Bunin and Leo Tolstoy.

The publication by the Foundation of the Gospel of Dostoevsky deserves a special mention. The Gospel, which took several years to prepare and involved many prominent experts on Fyodor Dostoyevsky’s literary heritage, is a facsimile edition of the 1823 Gospel that the wife of Decembrist Mikhail Fonvizin, Natalya Fonvizina, presented to Dostoevsky in the Tobolsk transit prison. Fyodor Dostoevsky carefully preserved this book during his years of incarceration and penal servitude, essentially his entire life, making notes with a fingernail, pencil and charcoal.

Researchers have done a great job identifying and studying those marks, more than 1,400 in all. All of them are listed in the Appendix to the Gospel. This unique edition is a perfect combination of beauty, informativity, visual expression, conciseness and functionality. In its work on the Gospel of Dostoyevsky the Tobolsk Revival Foundation sought to create a monument to the great writer in a book form, and create it certainly did!

The three-volume set includes the facsimile of Dostoyevsky’s personal copy of the New Testament with all the marks made by the great writer and Orthodox thinker, scholarly comments to his marginal notes, a detailed description of how the Word of the Gospel is reflected in Dostoyevsky’s texts, and how it affected his life and work.

Dostoevsky and the New Testament is an amazing story of a relationship between a great man and a great Book, the biggest highlight in the history of Russian culture. The Gospel does more for understanding Fyodor Dostoevsky than any learned research about him.

Yury Shafranik, Chairman of the Board of Trustees of the Revival of Tobolsk Foundation, is absolutely certain that, given the scale of the great writer’s personality and creative endeavor, the new Gospel of Dostoevsky will be recognized both in Russia and elsewhere in the world.

The electronic version of the Gospel of Dostoyevsky, created by the Tobolsk Revival Foundation, offers active navigation throughout the book with a full-screen view of the writer’s marginal notes and comments to them browsed along with facsimile pages, and much more, all of this proving the advantage of an electronic edition over a paper one.

The list the Foundation’s activities goes on forever and includes annual publications of a lavishly illustrated Calendar, numerous exhibitions and book presentations, lectures by leading scholars on topical issues of Russian public life, inspiring feelings of patriotism, love for the Motherland,  respect for the accomplishments of the past generations, unity of people and their country.