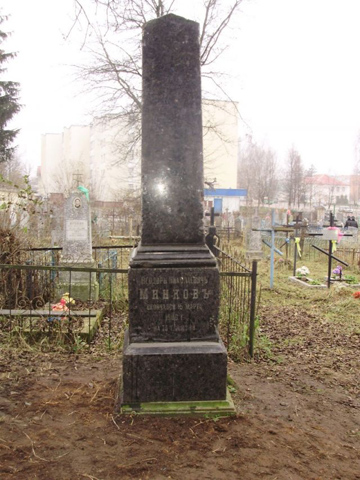 The grave of Todor Minkov, an outstanding Bulgarian enlightener, was discovered in a state of total neglect in the midst of a historical cemetery in Drahichyn, Belarus, in 2012 [1]. On January 4, 2013, a convention, attended by diplomats from the embassy of Bulgaria in Belarus, gathered in Mensk to commemorate Minkov's birthday (January 2, 1830) [2]. Shortly after the finding of the burial site was reported on TV in the Open Format show, the place was carefully rebuilt by volunteers from the cadet corps of the city of Slonim who thus expressed their regard for the legacy of Minkov, a principal of one of the first youth military schools in Belarus.

No doubt, Todor Minkov deserves to be remembered even a century since his passing. He was born in Russe in 1830 into a Bulgarian family which hailed from Veliko Tarnovo. Todor's parents were the Georgievs, but the child was given the family name of Minkov, as well as the first name, in honor of his influential uncle. The latter assumed most of the responsibility for the upbringing of his nephew and namesake.

Todor Minkov studied in Vienna and Dresden. A fluent speaker of Russian (and also of Greek, German, and Turkish), Minkov connected with a circle of fellow-students from Russia and developed a profound interest in Russian literature, especially in Pushkin and Gogol [2].

In 1853, the Ottoman Empire and a coalition of Western powers unleashed the Crimean War with the goal of pressuring Russia out of the Black Sea. With a blessing from his guardian, Minkov, a man of action by nature, joined a group of some 4,000 Balkan volunteers – Bulgarians, Serbs, Romanians – to fight in the ranks of the Russian army under the command of Gen. N.G. Stoletov. The force was involved in a series of crucial episodes of the Crimean War. In particular, Minkov is known to have taken part and to have sustained his first injury – a leg wound - in the legendary defense of Sevastopol. Later, Minkov, then awarded  a top Russian medal for battlefield courage, served as an aide-de-camp to Russia's South Army commander Prince M.D. Gorchakov. Moreover, Minkov and Gorchakov became cordial friends, and subsequently a portrait of Prince Gorchakov used to be on the wall in Minkov's home for years.

Russian citizenship was offered to the Balkan volunteers in the wake of the Crimean War, and Minkov settled down in Russia. Upon deliberation, he concluded that enlightenment was key to the future of the Bulgarian nation and therefore focused on the patriotically oriented education of the younger generation of the Balkan Slavs. While Minkov's own transcripts had been earned in Austria, he maintained that the country of choice for Bulgarians to attend learning institutions was Russia as Russians and Bulgarians shared religion and ethnic roots, so that Bulgarian graduates, upon repatriation, would not feel alienated from their original environment. Bulgarian students flocked to Russia in the 1860ies, with the Russian government generously dispensing stipends to Slavic visitors and supporting Slavic schools across the Ottoman Empire. Overall, the Bulgarian issue featured prominently on the political agenda of the Russian society in the epoch. Diplomat Gen. N.I. Ignatiev, for example, suggested that Russia, unable to influence the Balkan affairs directly after the defeat in the Crimean War, could simply invite the whole Bulgarian population to take shelter in the country. The Bulgarian immigration to Russia peaked, but for most people leaving the ancestral land naturally remained out of question [2].

Minkov's mission as an educator commenced in 1962 when he opened a boarding school for Balkan youths in Mykolaiv, the implied political program being built around a combination of Bulgarian patriotism and pan-Slavism. Somewhat later, the institution was renamed to South-Slavic School and mostly trained Bulgarians and Serbs.

The activity evidently worried the Turkish authorities which responded by employing a handful of representatives of the Bulgarian community in Constantinople to launch a smear campaign against Minkov. He faced a round of allegations of bribery and of concealing corruption under an ideological veil, but the dirt did not stick and the school lived up to its reputation of a place where Balkan youths grew up as nationally-minded people with a strong sense of loyalty to Russia. Moreover, to a huge displeasure of the Turks, Minkov's school emerged as the alma mater of a cohort of leaders of the Bulgarian liberation movement including Mikhail Grekov, Panayot Volov, Yakov Petkov, etc. Three of the graduates reached the rank of general in the Russian army. One of them, Peter Gruev, died in Tula, Russia, in 1942 after a remarkable military career. Several of Minkov's former students held ministerial posts in Bulgaria or were famed as major contributors to Bulgarian science [3].

Teodor Minkov – routinely called “Fedor Mikhailovich” in the Russian manner – moved to Belarus in 1893 to preside over a cadet corps for Russians and Bulgarians. Scores of estates in the area in the proximity of Drahichyn had been granted to Polish gentry as rewards for their participation in the Russo-Turkish war but confiscated over the 1863-1864 Polish rebellion, and, tentatively, Minkov landed in one of those. A brotherly link exists between us, Bulgarians, and the Russian people with whom we have in common religion and ethnicity,- wrote Minkov in a paper which reads as his political testament – and a bitter disappointment awaits those who hope that this relationship can be broken.