“Tolstoy set off an ‘information bomb’ in French space” 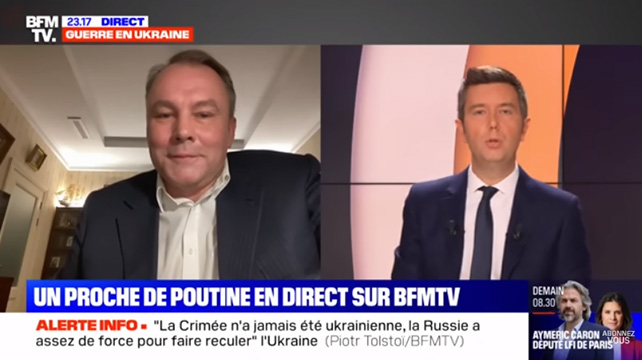 Deputy Chairman of the State Duma of Russia Pyotr Tolstoy was invited to the live broadcast of the French popular TV station BFM TV and had a bright discussion with famous French journalists.

According to the audience who commented on this broadcast on the Internet, "France was stirred up."

Someone even said that "Tolstoy set off an information bomb in French space."

Tolstoy forced French viewers to look at the Ukrainian conflict from the perspective of Russia, Donetsk and Lugansk.

Let's quote the brightest parts of this big interview, translated from French into English.

Tolstoy: "Russia does not strike at social facilities, we strike at infrastructure, and it will be destroyed… The only thing that matters in Ukraine is the help of the West, it is the West's supply of heavy weapons to Kyiv, and for this you will pay!"

Host: "You threaten us, you say that Europe will pay for the war?"

Tolstoy: "The West, Europe will pay for the war. It will be expensive, for the middle class, for the European Union, which will face an economic crisis. Your politicians, who will be in the dustbin of history, will also pay for this war. And those in 3-5 years they will come to replace them, they will take the queue for the right to negotiate with Russia ...

“Russia is the largest country, and we fought twice with Europe. Russia ended the first war in Paris, the second – in Berlin. Therefore, when I said that we would end in Kyiv, I was  modest.

Host: "Are you threatening with nuclear weapons?"

Tolstoy: "I am not threatening with nuclear weapons, it was the West who used uranium charges during the bombing of Yugoslavia.

“You have  killed hundreds of thousands of people in the world (Libya, Iraq, Afghanistan) with your pseudo-romantic rhetoric. This war is not for months, so the West better get ready, you will have a lot of time to feel everything.

"For eight years, Ukraine has been killing the children of Donbass. All these years, 20 million Russians have been discriminated against in Ukraine, they have been deprived of their history, their language. Do you think this is not suffering?"

Moderator: "During today's conversation, you frankly expressed your dislike for NATO, the European Union, are your troops going to cross the border with Poland?"

Tolstoy: “Why should we go to Poland? Why? We are not the sources of this tension in relations with the West, it is the USA and the EU that are sending weapons to Ukraine, which are used to strike at our cities.

Discussion of the interview of Peter Tolstoy continues throughout France.