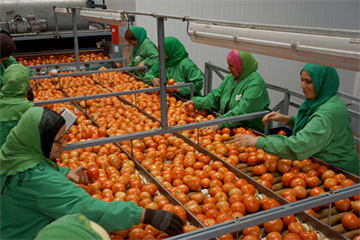 Such was the destiny of this correspondent’s duties that I was to travel to Morocco on a regular basis over the years, and oranges along with Tangier no longer induce in me such a severe emotional reaction.

Over the years the borders have opened, and now you can hit the road to Tangier any time, and Russian stores are full of oranges from Morocco.

But, closer inspection proved that Morocco is not only rich in citrus fruits. A recent trip there brought another Moroccan surprise – the farmers in Agadir province are ready and willing to provide Russia with fresh vegetables every winter.  These goods grow here all year, and yields are in the hundreds of thousands of tons.

Here is an opinion from one report: “vegetable production in Morocco is relatively recent. It has developed with the growth of the urban population, and especially with the advent of the possibility for the quick delivery of perishable products to foreign countries.”

The main areas of horticulture are The Atlantic plain (where Agadir is – S.F.) and the lowlands facing the Mediterranean Sea.

Although Morocco has competitors such as Italy, that alone "throw" millions of tons of tomatoes at the European market, Moroccan farmers can sleep in peace. They specialize in sending early vegetables to Europe, where there is still snow, and in any event, before their competitors start to market their products.

Today, Britain, Germany, and the Nordic countries are supplied during the winter with fresh Moroccan tomatoes, peppers, etc. etc. Whatever vegetable is on the list...

Morocco decided to “take a swipe" at Russia. That is why our large delegation participated in an agro exhibition “Sifel Agadir” in the Moroccan city of Agadir, to view local produce and to conclude new contracts for the supply of fresh vegetables to Russia in the wintertime.

During the course of the exhibition I was told by a representative of one of our largest retailers, that in summer vegetables come to Russia from Central Asia, Ukraine, Israel and Poland, but in the winter they are almost nonexistent, and what trade there is has been lay in storage for several months ... However now there is an opportunity to put completely fresh food on Russian shelves.

The “Sifel Agadir” agro exhibition opened in early December 2012 under the patronage of the Ministry of Agriculture of Morocco, and was the 10th of its kind. In addition to local vendors, companies from a half dozen countries also took part.

Russia fully expressed itself. In this photo there is a shot from the video presentation of the country's largest exporter “Maroc Export”, which is dedicated to finding new markets.

As you can see, along with Canada and Sweden, Russia presents a promising opportunity: 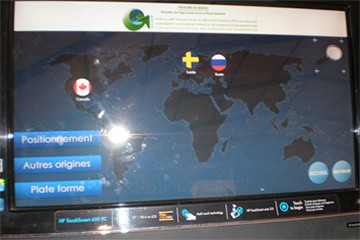 From the figures there is one to remember - 1.5 percent. That is currently how much in total Russia takes of Moroccan fruit and vegetable exports.

Is that a lot or not? Not a lot. Apart from local oranges other products rarely appear on our shelves.

That is why Russian retailers came here, to study, so to say, the question of wholesale supplies of Moroccan agricultural products.

Our hospitable hosts drove our delegation to their plantations, showing off the lack of pesticides, and to the packaging workshops of local businesses.

Also we talked about trading problems. The main one is the arrangement of health certificates for the export of Moroccan food to Russia. Although it is clear that the process has started, the figure of 1.5 percent visibly demonstrates that so far it is still "up in the air" and there are constant problems.

As Omar Munir, general manager of “Agafonte” and who is also vice-president of the Moroccan-Russian Business Council of the Chamber of Commerce and Industry of the Russian Federation complains, a memorandum with the Russian government has been signed, that all certificates are in accordance with international standards, but  still your customs regularly complain. Currently we are waiting for a delegation from the Russian health service to resolve all these issues.

I could tell you more, but it is better to see what the Russian delegation saw in Morocco.

Keywords: Morocco. Russian-Moroccan Business Council of the Chamber of Commerce and Industry of the Russian Federation. “Sifel Agadir” agro exhibition.