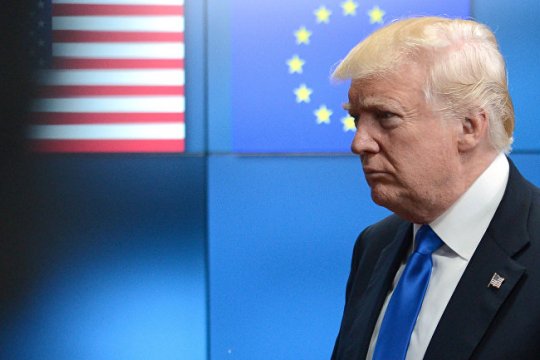 Trade negotiations have been increasingly used as a political tool. This is the first thing that comes to mind when one is trying to understand what is happening around the trade war unleashed by the administration of Donald Trump practically on all fronts: against the EU, China, Russia, Mexico and Canada.

On the eve of a visit to Washington of the European Commission President Jean-Claude Juncker, Donald Trump suggested that the EU, at the same time as the USA, abandon customs duties, barriers and subsidies. He said in his Twitter account that he suggests this because they will refuse just the same ...

The visit ended with the conclusion of a trade deal, including the deal on duties on car industry products, but the question remained: of course, geo-economics and geopolitics are strongly interrelated, but is it permissible to use trade negotiations as an instrument of political bargaining, and why do we increasingly see this?

Just before Junker’s visit the European Union and Japan signed world’s largest free trade agreement, the volume of which is estimated at one-third of the World gross product (GWP), and which directly affects about 600 million people. In contrast to the actions of the Trump Administration, which recently tightened import tariffs, this was seen as an important step in protecting free trade.

It was also reported that the European Commission is completing negotiations on the establishment of a free trade zone (FTA) with MERCOSUR, which in its scale can exceed the FTA with Japan (the members of this trade and economic union account for 250 million people and over 75% of Latin America's total GDP ). Again, the question arises: is there still an immediate political context here, since the negotiations on the establishment of the FTA have been going on for years, if not for decades, and why is it announced right now about their triumphant conclusion?

The USA has a recent experience of large-scale trade negotiations, the politicization of which ended in a fiasco. The issue is the establishment of the Trans-Pacific Partnership (TTP), which implied the borders expansion and the deepening of interstate agreements on the unification of the legal field. It was planned to supplement the agreements on the liberalization of trade in goods and services under the norms of free trade agreements with the legal regulations on investment, innovation exchanges, protection of intellectual property, labor relations, management of migration flows, environmental standards and competition standards.

The USA tried to involve many Asian and Pacific countries in the creation of the TTP, but China, the main economic entity in Asia, was excluded from this union. For China, with its state protectionism in sensitive industries that provide economic growth and employment (and therefore important for political stability), the conditions of the TTP were initially unacceptable. Beijing, not without reason, suspected that the USA wanted to create a trade bloc in Asia without the participation of the PRC in order to kick China out of integration processes. That's why China has tried to create an alternative to the TTP by promoting its project - the Regional Comprehensive Economic Partnership (RCEP).

As we recall, Donald Trump "buried" the TTP as a legacy of Barack Obama, and now this partnership under the "TTP Plus" brand is already living its life without the participation of the United States. The main thing is that after the TTP deal any other initiative of this kind (for example, the idea of the Indo-Pacific partnership) automatically raises fears among its potential participants: whether they will be drawn into confronting China, whose trade and economic relations are so important for many countries in South-East and South Asia.

The experience and lessons of US trade negotiations are, of course, important for Russia, but mainly in "how not to do." In the same Asia-Pacific region, a large number of trade agreements operate, differing in the depth of liberalization and in the number of participants, which creates the potential danger of dividing the region into separate competing associations. Therefore, for Russian participants in trade negotiations, the choice is unambiguous: to avoid their unnecessary politicization and to act on the basis of transparency and openness, with mutual consideration of the interests and capabilities of the parties, by relating any possible agreements with the multilateral trading system of the WTO.

Russia's participation in the negotiations on the creation of free trade zones and integration projects is determined by its long-term geo-economic and geopolitical considerations, and at present, when Russia is in search of an "entry point" to this process, the latter can be assessed as the most relevant.

Equally, and perhaps even more important for Russia is the fact that, unlike such trade and economic "giants" as the United States and China, it is now not so much interested in the development of liberalization of regional trade (trade liberalization), as in the strengthening of its transparency and trade-economic interconnection (trade facilitation), the creation of a fair, stable and balanced trade and economic system, including in Eurasia and the Asia-Pacific region, which responds to the priorities and development level of the Russian economy, especially its export-oriented commodity-producing industries.

That is why Russia has taken a course in upholding the priorities of transparency and interrelatedness of trade and economic relations since this is what helps it become an active and interested participant in the discussion of new rules for regional and world trade.

Such a course is consistent with the long-term geo-economic and geopolitical interests of Russia, primarily in such a priority area as Eurasian integration and the development of the Eurasian Economic Union (EEU).

And here it is necessary to remember the lessons of the recent past connected with excessive politicization. The intensification of Russia's and the EU policy towards the countries of the region of their "common neighborhood" led to the fact that some of them (Ukraine, Georgia, Moldova) were faced with a tough choice in favor of the priority development of relations with the EU or the Eurasian association. In a number of countries, this has greatly reduced the opportunities for the traditionally conducted by their governments maneuvering strategy between Moscow and Brussels and led to an internal political escalation.

In Moscow, this was well understood, and there were no contradictions between the processes of Eurasian integration and the development of relations with the European Union, if the EEU and the European Union began to base their interaction on the principles of free trade and compatible regulatory systems.

However, the European Union held the view that the obligations within the framework of the Customs Union exclude for its members the very possibility of introducing a free trade zone (FTA) with the European Union - in contrast to the CIS Multilateral Free Trade Zone (based on a treaty signed in October 2011 by Kazakhstan, Russia, Byelorussia, Kyrgyzstan, Tajikistan, Armenia, Moldova and Ukraine), which does not presuppose the work of supranational bodies. From Moscow's point of view, such obstacles can be lifted if one follows the path of establishing an FTA between the EU and the EEU.

In the article published by the German newspaper  "Süddeutsche Zeitung" in November 2010, Vladimir Putin (at that time the Russian prime minister) put forward a long-term plan for the construction of a free trade zone between Russia and the EU (by the way, at that time the World political vocabulary acquired the term "conjugation").

Unfortunately, this idea, dictated by absolutely economic logic, was coolly received in European political circles, and the reply from Brussels was, not without political arrogance, that the EU's relations with the above countries do not require Russia's participation. Show Europe then a little more foresight, many undesirable events in the post-Soviet space could have been avoided ...

Russia is still trying to convince its partners to abandon the opposition of European and Eurasian integration in favor of conjugating both projects. So far, unfortunately, neither the post-Soviet integration, nor the EU is consistent with these aspirations.

However, the dynamic development of integration processes in the Asia-Pacific Region offers Europe and Eurasia a new challenge. Given the geographical situation of the post-Soviet countries between Europe and Asia, the development of infrastructure networks and cross-border transport projects with access to China and other countries, the APR would create conditions that would ensure a more favorable external environment for the conjugation of Eurasian and European integration and strengthen the competitiveness of these integration entities.

And here economic logic would help to gradually overcome political contradictions. The solution of the accumulated geopolitical problems could be the creation of a common free trade zone of the EU, the EEU, Ukraine and other Eastern Partnership countries associated with the EU. However, in addition to political will, it takes time to solve a large number of purely economic and technical issues. Effectively, such a project can be facilitated by the fact that all the countries involved are either WTO members or are planning to become them in the near future.