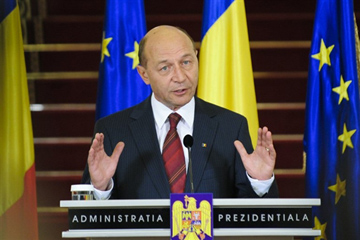 The collapse of the Romanian opposition's initiative to unseat president of the country Traian Basescu briefly drew heightened attention to the embattled political leader and, upon scrutiny, highlighted the ongoing erosion of the European unity. The critics of Basescu still credit themselves with the failed referendum as a major political feat, but it is clear that further attempts to displace the president via political procedures stand no chance and would trigger an escalation potentially involving violence.

A preliminary survey released by the Central Election Bureau set the July 29 referendum turnout at 46.13% [1], which is below the 50% margin required by law to validate the poll. To a bitter disappointment of the president's archrival, social-democrat Prime Minister Victor Ponta and the camp around him, Basescu therefore regained his post after being temporarily suspended by the parliament. Ponta cites the score of those who voted against the president – overwhelming 87.55% - and says that Basescu "will remain at Cotroceni [the presidential palace] but he will no longer have legitimacy". "We must defend Romanians who voted for the impeachment", added Ponta in a confrontational if not explicitly destabilizing statement. Asked how he felt about Basescu's call for cooperation between the presidential administration and his foes in the  government, Ponta bluntly replied: "What's there to discuss with a man who has been rejected by Romanians?" [2]. Basescu, in the meantime, charged the parliament with scheming to give control over Romania's judicial system and state institutions to the Social-Liberal Union by squeezing him out.

In fact, the Romanian legislature was divided when, on July 6, it passed the referendum decision with only 258 out of 432 parliamentarians voting in favor of holding the poll. Pressing for it, the National Liberal Party accused Basescu of violating the constitution in 2010 by slapping on Romania a painful austerity program and trimming the authority of the judiciary without consulting the premier. On July 16, caretaker Crin Antonescu announced the date of the referendum and expressed a hope that it would end the politically explosive situation [3].

A new round of the standoff between Ponta's ruling coalition and the Democrat Liberal Party which supports Basescu followed instead. EU diplomats who spoke on conditions of anonymity project that tensions between the Romanian president and the left-centrist majority will persist over the coming months. Romanian commentator Radu Alexandru explains that position adjustments on either side in the wake of the plebiscite are improbable since in Romania political conflicts tend to be personified and, as a result, virtually impossible to defuse [4]. Expectations that the discord will deepen similarly prevail in the Romanian media. Romania Libera wrote that emotions would be running even higher among the president's attackers and supporters upon his reinstatement, and that the ruling Social-Liberal Union rather than Basescu would have to face an embarrassing set of circumstances [5]. Ziarul Financiar contributed a wider perspective to the discourse, warning that the lingering political row in Romania would send the cost of the EU and IMF financial assistance to the country climbing [6].

There has to be a serious reason why the majority of the population in Romania did not subscribe to the initiative aimed at unseating the current president. In 2007, Basescu already survived an impeachment bid staked by social democrats, the Conservative Party, and the nationalist Greater Romania. At that time, a parliamentary commission concluded that he overstepped the limits imposed on his authority by the constitution - among other things, the grievances list included the president's appointing or dismissing high-ranking government officials and security chiefs without taking counsel from the legislators, meddling with the justice policies and law enforcement agencies, and feeding to his cronies government contracts and the sweetest privatization deals. Around 75% of the constituency did back Basescu in the poll which ensued.

The current conflict in Romania is centered around socioeconomic policies and appears to be a lot more intense. The markedly nationalist views held by Basescu who, for example, says that Romania should absorb the post-Soviet republic of Moldova add an extra dimension to the problem.

The belt-tightening policies implemented by the recent Romanian governments fueled severe tensions in the society and echoed with mass protests. Premier Emil Boc had to step down in February, 2012 – to ease tensions in the society, in his own words – as his cabinet lost a no-confidence motion in the parliament, even though, by constitution, he could keep his post till the November parliamentary elections. Interestingly, Boc, who was believed to be a supporter of Basescu, handed in his resignation literally the next day after a EU-IMF commission rolled out a positive assessment of the reforms his government had put into practice over the previous several months. The reforms helped Romania secure the EU and IMF consent to a Euro 20b bailout but cost Romanians an average 25% pay cut, surging unemployment, and increasingly burdensome taxes. The EU and the IMF pushed Bucharest to agree to measures patterned on those taken by Athens, while the popular protests which erupted in mid-January across Romania left no doubt that the public discontent across the country was getting out of hand [7]. In the settings, Boc's successor Mihai R?zvan Ungureanu was unable to consolidate his positions as Romania's next premier and eventually retired, yielding to Victor Ponta.

Normally, the governments implementing austerity programs prescribed by the EU and the IMF can count on the support from the two. This was the case in most stumbling EU countries, but Romania proved to be an exception from the rule, considering how sour the relations between Basescu and Brussels turned over the past year. The EU is nervous about Basescu's Greater Romania aspirations, does not dare – at least openly - to encourage his plan to draw in Moldova, and demanded recurrently that Bucharest stop issuing Romanian passports to Moldovans. Early this year, Romania shocked the EU with its untamed autonomy in foreign-policy decision-making by casting a veto on Serbia's EU candidacy in connection with problems which allegedly cloud the existence of the Vlach minority in the country. It took urgent phone talks between Brussels and Bucharest to settle the dispute, and the spot on Romania's diplomatic record will not easily fade. Describing the episode, German foreign minister Guido Westerwelle said the conduct did not agree with the European spirit [8].

Importantly, Basescu belongs to the small cohort of European leaders who, defying the pressure exerted by Brussels and Washington, continue to reject the self-proclaimed independence of Kosovo. Europe's persistent shutting Romania out of the Schengen zone is not at all surprising in the light of the above.

The response voiced by Brussels to the recent developments in Romania seemed heavily diluted. Concerned that things would spin out of control, the European Commission was the likely driving force behind Crin Antonescu's eventual decision to subject the impeachment initiative to a crash test in a nationwide poll. Domestically, Basescu enjoys a reputation of a fighter against the Brussels bureaucracy and a champion of the Romanian cause, and has no difficulty selling his conflict with the opposition as a clash between Romania's patriots and the EU expansionists. Today's reality is that the tendency to define political positions in similar frames of reference is surfacing across Central and South East Europe, from Greece to Hungary or from Serbia to countries outside the EU orbit like Ukraine and Belarus. The division places the Basescu phenomenon in a broader context of the nationalist upheaval in Europe which evidently threatens the European unity.