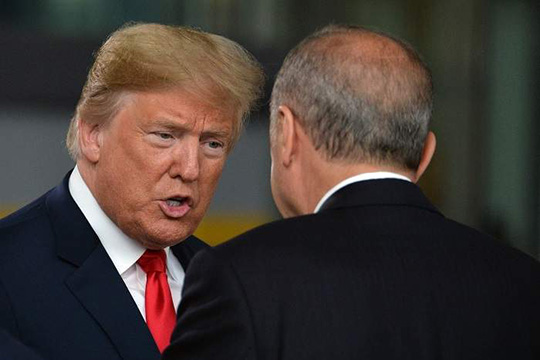 Presidents of the United States and Turkey Donald Trump and Recep Erdogan met for bilateral talks in Washington on November 13th . In the course of what Donald Trump described as “lengthy and productive” negotiations and during a series of one-on-one and enlarged meetings, the Turkish leader announced his country’s  determination to start a new chapter in relations with the United States, which has long been Turkey’s close partner, he said. In turn, President Trump made it clear that he is a genuine supporter of the Turkish leader, who does so many good things for his country and for his people. Both presidents assured each other of their commitment to “Atlantic solidarity” and reprimanded French President Emmanuel Macron for doubting it.

The participants in the talks made no concrete statements at the closing press conference.

Undoubtedly, the meeting meant a lot for both parties. Amid the current anti-Turkish sentiments that prevail across a wide spectrum of the political establishment and that dominate an equally large part of public opinion, Trump, who could well be facing impeachment shortly, should find continuation of the policy of “pacifying” Turkey an exceptionally risky game. As for Erdogan, many Turkish experts believe that given Ankara’s not very successful Syrian policy, a failure of the negotiations would create an extremely unpleasant situation for Turkey, both geopolitically and economically. For the United States as well, the hypothetical “loss” of Turkey, with its unique strategic position and second largest army in NATO, could seriously damage its positions in the Middle East region, particularly, against the strengthening of the positions of Russia.

The two presidents met at a critical period for Turkish-American relations. Among the "stumbling blocks" that have accumulated over the years are the following: a resolution adopted by the US Congress that acknowledges the Armenian genocide of 1915 (the resolution was suspended by the Senate following the meeting), the purchase of the Russian S-400 air defense systems, Washington’s refusal to extradite to Ankara the preacher Fethullah Gulen, who was accused of plotting a military coup back home, the charges against Turkish Halkbank for breaching anti-Iranian sanctions, the suspended but not lifted sanctions for operations in Syria, which, according to US Treasury Secretary Stephen Mnuchin, "are always on stand-by, ready to use”, and finally, a threat to track down and arrest foreign assets that belong to Erdogan and his family members.

Several days before setting out for his overseas trip President Erdogan said that during the negotiations with his American counterpart he was planning to focus on bilateral relations, including  “S-400 missiles, Patriot air defense systems and F-35 fighters,” as well as “regional issues”. And supposedly, he was also set on demonstrating to Moscow yet again that Ankara has room for maneuver outside the Astana format. Right before departure, Erdogan switched the emphasis from the above mentioned one to the struggle against terrorism, in other words, to the “Kurdish issue”: “Neither Russia nor the United States has kept their promises to Ankara concerning the withdrawal of terrorists from areas bordering Turkey. We will discuss this issue with Donald Trump. Upon my return, I will bring the matter up in a telephone conversation with Russian President Vladimir Putin. ”[i]

Shortly afterwards, there appears an article in the Yeni Şafak newspaper that the Kurds, "having failed to get the desired revenues on the oil wells" they captured in Syria, have signed an agreement with the Israelis on the development of oil fields and the sale of oil. From Ankara’s point of view, this is a blatant "conspiracy" on the part of Turkey’s hardcore foes – the Kurdish militants and Israel, who both enjoy American patronage.

The final decision to go to Washington was made after a “very effective”, according to Trump, telephone conversation between the American and Turkish leaders (after the Congress passed a resolution on the 1915 genocide, Erdogan, at least in words, nearly changed his mind about flying to Washington). In the long run, his decision could not be shaken, even by a publication in the New York Times of unfriendly excerpts from working correspondence by William W. Roebuck,  assistant to Trump’s special representative for Syria James Jeffrey. According to the documents that the newspaper had got hold of, Roebuck blamed “Turkish-sponsored armed Islamist groups,” for nothing less than ethnic cleansing and military crimes in northern Syria. He described the Syrian democratic forces, which Ankara considers a terrorist organization “a strong and reliable ally.” [ii] All this comes in the wake of a statement made by Turkish Foreign Minister Mevlut Cavusoglu that the recent military operation by Turkey no less than prevented the formation of a “terrorist state " which Israel and some Arab countries allegedly put a stake on!

Finally, on the eve of the negotiations, The Washington Post, citing its sources, reported that the American president was offering the Turkish leader a $ 100 billion trade deal, on conditions favorable for Turkey, as well as a “shortcut” for handling the situation involving Russian missile systems. According to the newspaper, the United States is yet again trying to persuade Turkey not to put S-400s which had arrived from Russia, on combat duty, proposing in return to forget about sanctions and return Ankara to the F-35 production program (in which Turkey has invested heavily!). Well, the attempt to "buy" encased missiles is truly in the spirit of the American businessman president. It is unclear, however, what the partners will fill the 100 billion "wallet" with: at present, the volume of bilateral trade fluctuates around $ 20 billion.

Back to the negotiations. In a nutshell,  judging by the presidents' press conference, they agreed to continue to work out an agreement on all points of the agenda. For example, commenting on Ankara’s purchase of Russian S-400s, Trump said that Washington and Ankara will continue to work in this direction and that “this issue will be considered at foreign minister level.” “Only through dialogue,” - Erdogan confirmed. This means the bargaining goes on.

It looks like the presidents have not come to agreement on the Kurdish issue either. The Turkish president assured his counterpart that Turkey remains America’s most trustworthy partner in Syria, and this state of things should persist in the future. [iii] In other words, it can be assumed that he thereby wanted to say that Ankara is willing to replace the Syrian democratic forces as a major proponent of the American policy in the region. Of course, on condition of maintaining its top priorities: to block the Kurds from creating their own state and redirect the flow of hydrocarbon fuels that are supplied to Europe to pass through its territory.

In fact, having achieved next to nothing in Washington, Erdogan, nevertheless, has demonstrated to the rest of the world (and not in the last place, to his voters) that he is a full-fledged and unyielding partner of the United States. Presumably, he expects Moscow to appreciate it as well. No one can say for sure how long this game on how to boost the geopolitical weight of Turkey will last. But obviously, it will not go on forever, and this is what the Turkish authorities ought to be aware of.