Trump impeachment failure - what is in store for America and the world? 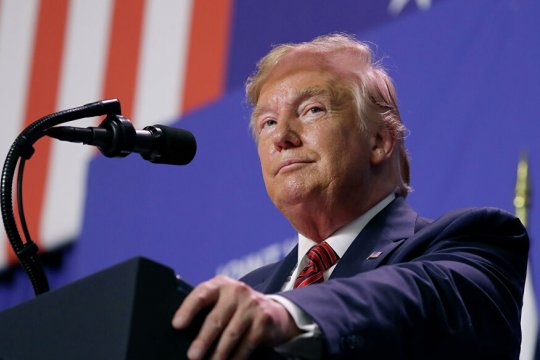 On February 5, the US Senate found President Donald Trump not guilty of actions which could be classified as requiring his removal from office. All Republican Senators, who have a majority in the house, except Mitt Romney, turned down both charges against the president which accused him of "abuse of office" and " obstructing Congress work."

That impeachment is not the option was obvious to any Washington insider from the very beginning. To remove Trump from office it was necessary to enlist the support of two thirds in the Senate, which is unrealistic at the moment. The more moderate opponents of the head of the White House could, if they wanted, remind themselves and others that until the very last they were calling for considering all the pros and cons of an attempt to remove the president from office. A number of experts believed that “a threat of the impeachment procedure, without specific measures to this effect, would be a much safer way to ensure the defeat of Donald Trump in the next year’s presidential election.”[i]  The hearings as such would demonstrate the “incompetence” of the current head of state. Even Speaker of the House of Representatives, Nancy Pelosi, who ultimately came to lead the Democratic attack against Trump, warned in March last year that "impeachment divides the country in such a bad way that ... we should not follow this path" [ii]. Last December, The Washington Post pointed out that in America, "there is extremism, there is no political clairvoyance, while the voices of reason are drowned in hyper-party cacophony."

Over the past years, Washington has indeed seen a continuing buildup of fierce political battles. The political layout which came into place after the mid-term elections in 2018 - the Democrats control the lower house and the Republicans have majority in the upper – has resulted in a situation in which battles are waged not just for every yard, but for every inch of political space.

Success in the lower house midterm elections, that is, getting the largest number of seats since 1974, has clearly encouraged the Democrats. Given the situation, an attempt to impeach the president was seen by their leadership as a good opportunity to return anti-Trump inquiries to the political agenda. In addition, the expectations of Democratic Party supporters regarding the launch of impeachment procedure were so high that a refusal of the party leadership to try to remove Trump from office could cost Democrats votes this year. We should not forget that we are talking not only about the presidential election, but also about the next congressional election campaign.

The confrontational scenario of the 2020 election campaign appears almost inevitable. Critics of the president do understand this, so their statements after the failure of the impeachment move are predictably radical - now Trump is unbound. They believe that he will now move with renewed vigor towards the implementation of his "anti-American fantasies." Trump’s supporters are so dazed by ideological confrontation with the opponents that they are ready to accept and defend "any lie from his mouth." As for the American democracy, it is vulnerable "as never before."

Trump, in turn, makes it clear that he craves political revenge. He has already fired several officials who testified against him during the impeachment hearings in the House of Representatives. Most likely, Trump will continue to rely on “American nationalism” and “white identity”, so hated by Democrats. He has also got more grounds to blame the obstruction-creating Democrats for all his failures during the election campaign. Moreover, what with all the achievements in the midterm elections two years ago, the Democrats were defeated, or could not sufficiently build up their positions in a number of states which are considered to play a key role in the upcoming presidential election. And the recent primaries in Iowa where the calculation of the results dragged on for several days demonstrated that the Democratic Party is still experiencing chaos and confusion.

According to a generalized view of domestic political processes in the United States, the executive branch’s futile attempts to push through the Congress projects of significant legislative changes have long become a “tradition” in American domestic politics. This process originated a long time ago - after the end of the Cold War, when the need for coming to a bipartisan consensus lost the status of a national security issue. As a result, discussions of almost every important point of the presidential election campaign are accompanied by  emotions, which prevail over facts and over attempts to propose a reasonable and comprehensive solution.

This trend is consistent under Trump. On the one hand, the Republican president has a good reason to criticize the legacy of his predecessors. He would also be right to appeal to the importance of launching “at last” the practical implementation of reforms, the need for which has been acknowledged by all administrations since the mid-1990s. On the other hand, the presence of a political will faces the realities of the political process, the participants of which, as before, appeal not so much to national interests as to the moods of the public. Demand gives rise to supply - Trump prefers to focus on issues that find the strongest emotional response in society. In response, the opponents accuse Trump of pursuing a “chaotic” policy on almost any issue. However, in the long run, what is taking place is a split that is running through the entire spectrum of American political system, and this split, as impeachment battles have demonstrated, has been deepened by the efforts from both parties, which are ready to contribute to its worsening with "unprecedented" vigor.

Aggravation of internal political struggle in the USA, as historical experience shows, often pushes American presidents into abrupt, often ill-conceived foreign policy measures. A similar situation happened in the days of Nixon and Clinton. It could be the impeachment threat that prompted Trump to take two steps that could “blow up” the Middle East - the assassination of Iran’s IRGC leader Kassem Sulejmani and an ostentatiously one-sided plan for a Middle East “settlement” that has already been rejected by the Palestinians and a number of Islamic states.

Yet, even after the failure of the impeachment move the international community is unlikely to be able to breathe a sigh of relief. In the context of an easily predictable clash with Democrats in the House of Representatives, which is fraught with a dead end in promoting the legislative agenda, the most natural way for Trump to demonstrate effectiveness in the eyes of voters is foreign policy. From a legal point of view, it is in the field of foreign policy that the US president is least bound by the need to coordinate his steps with the Congress.

And hardly can we talk about the USA easing confrontation with China or Russia. Moreover, Washington has a bipartisan consensus on the need to tighten policies in relation to the two countries. On February 5, Trump's National Security adviser Robert O’Brien said in Washington: “Look, our challenge and the challenge of our generation is China's growth and the role that Russia continues to play on the world scene” [iii].

After the failure of impeachment, the Democrats may well try to use their majority in the lower house to resume attempts to get the issue  of "Trump’s relations with Moscow" and "Kremlin interference" in US domestic politics back into the spotlight. The tightening of parliamentary pressure on the White House will create new obstacles to prevent contacts between Washington and Moscow. Meanwhile, there are grounds to fear that Washington will see a new round of fight for the title of the most irreconcilable opponent of Russia.

Optimists among Russian experts believe that the main focus of the White House, like all of American politics, is finally shifting to domestic issues. This may give Russia a certain freedom of maneuver in international affairs. Dmitry Trenin of the Carnegie Moscow Center argues, "the risk of Congress introducing new sanctions against Russia will dwindle in the very near future." Especially, if the Republicans consider them a potential threat to the image of Trump and his administration. On the other hand, ... "Republicans may agree to approve the sanctions to once again dissociate themselves from" toxic "Russia," [iv] - the expert said.

According to pessimists, for both Washington parties, relations with Russia remain "one of the main grounds of confrontation." "Fairly soon, Americans may opt for a new strike on Nord Stream-2, the German Handelsblatt believes." If Russia tries to complete the construction of the missing kilometers of the pipeline through the Baltic Sea, the House of Representatives and the Senate are ready to initiate another sanctions law, Washington’s diplomatic circles say. ”This bill could include sanctions against project investors from Europe, or companies that plan to buy Russian gas through the pipeline.“ As reported, a move to this effect  could be taken in in the very near future, possibly in February or March. ”[v]

In general, the failure of impeachment is likely to further increase the degree of uncertainty in US policy. The realities of the political process remain the same - its participants will continue to appeal not so much to national interests as to public opinion, which is experiencing an ever deepening split. A certain political stabilization of America can be expected only after one of the parties regains control over both the executive and legislative branches of government.

From the point of view of an outside observer, what happened on Capitol Hill is all but a political formality. In essence, the US foreign policy will remain intact.