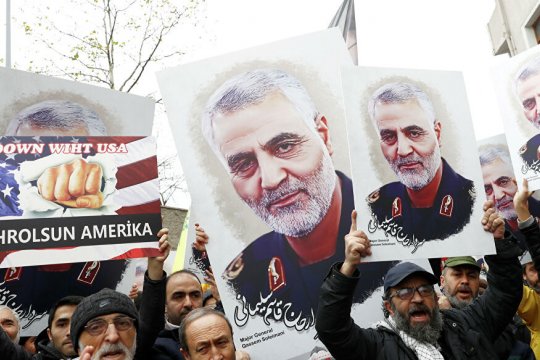 The assassination of General Qassem Soleimani and Iran’s retaliatory strike against US bases in Iraq brought the situation in the region to a head with President Donald Trump initially urging NATO to participate more actively in Mideast affairs and later proposing to expand NATO's membership to include Middle Eastern nations, albeit without specifying any concrete candidates.

“I think that NATO should be expanded, and we should include the Middle East. Absolutely,” Trump told reporters, adding that “contending that North Atlantic military alliance should take over for the US in the region “because this is an international problem.”

The White House owner even proposed a new name: NATO-ME (from Middle East). [i]

All this is taking place amid Washington’s rising tensions with Iraq, which "allowed itself" to be outraged by the US drone attack on the Baghdad airport. As to Washington, it has long stopped looking at Iraq as an independent actor, ever since it ousted Saddam Hussein destroying the fragile balance of power in the region and effectively making Iran a regional superpower. And all this time, Iraq has been desperately trying to maintain its territorial integrity. Whether it will eventually succeed in doing this is a big question though.

So, the US drone attack on the Baghdad airport and Iran’s retaliatory missile strikes against bases in Iraq housing US troops, “sparing” as they were, resulted in the Iraqi parliament’s demand to withdraw all foreign troops currently stationed in the country. Donald Trump saw this as a sign of “disrespect" for the United States (as if ordering a missile strike on a foreign country’s airport is a show of respect) and is poised to slap Baghdad with tough sanctions. In addition, due to his predilection for measuring everything with money, Trump added that the US forces would not leave Iraq until Baghdad fully repaid the cost of the air base built there by the United States.

As for Trump’s idea (NATO-ME), we have already seen something similar happening before. In 2008, there was much talk going on about creating, under US auspices of course, a new bloc of eight regional states, namely Saudi Arabia, the United Arab Emirates, Kuwait, Qatar, Oman, Bahrain, Egypt and Jordan – the so-called Middle East Strategic Alliance, MESA, or “Arab NATO.” Conceived by Washington, the alliance was to create a common front against terrorism, including Iran, which the US views as the main sponsor of terrorism. The idea fell through though, as Qatar has business, almost allied, relations with Iran; Oman actively cooperates with Tehran; Kuwait, mindful of its Gulf neighbors’ onetime failure to help it against the Iraqi aggression, chose to stay out of it. Egypt likewise refused to join in.

Almost two years on, these eight countries’ position remains pretty much the same. Moreover, NATO itself is going through hard times: some of its members continue to honor the provisions of the 2015 nuclear deal with Iran; in Syria, Americans, British, French, and other allies act as part of a coalition that exists outside NATO’s fold; Emmanuel Macron talks about the "brain death of NATO," and that’s not to mention Turkey. As for the European Union, it is now suffering from a kind of foreign policy impotence and is showing little interest in NATO affairs.

Even though Donald Trump said that NATO Secretary General Jens Stoltenberg was “delighted” with the prospect of the bloc’s expansion to the Middle East, NATO’s leading European members do not seem too eager to “get into” this region. First, because “getting out” of there won’t be easy, and secondly, because they are eager to keep doing business with Iran. It looks like NATO neophytes from Eastern Europe will be the only ones to once again respond to Washington’s call to show how true they are to the values of the “free world,” and, of course, to Washington. This leaves Britain the only NATO "oldie" the US can count on.

At the January 6 meeting of the NATO Council, the participants urged the US and Iran to show maximum “restraint” and reduce bilateral tensions. Jens Stoltenberg said that nobody needs a new conflict, apparently because he knows that no effective military assistance from the Arab countries will be forthcoming. Indeed, the Saudi-led Peninsular Shield Force, created in 1984 as a military arm of the Gulf Cooperation Council (GCC), proved unable to repel the 1990 Iraqi invasion of Kuwait. In Yemen, the Sunni coalition is equally unable to defeat the Shiite rebels. The results of the Arab-Israeli wars also speak for themselves. All this meaning that if necessary, it is the Europeans who will have to fight. But the Arab sheikhs have the money.

In a nutshell, Trump’s idea is to have European soldiers do all the fighting in the Middle East, and finance the military operations with Arab money (Trump never tires of complaining about NATO allies not contributing enough to the Alliance’s funding, and apparently doesn’t expect them to pay more).

"And we can come home, or largely come home and use NATO ... now the burden is on us, and that has not been fair," Trump said. [ii]

Just like that – simple and clear. Besides, this is exactly what the “average” American, who will go to the polls this fall to choose the country’s next president, wants to hear.