Turkey and conflict in Nagorno-Karabakh 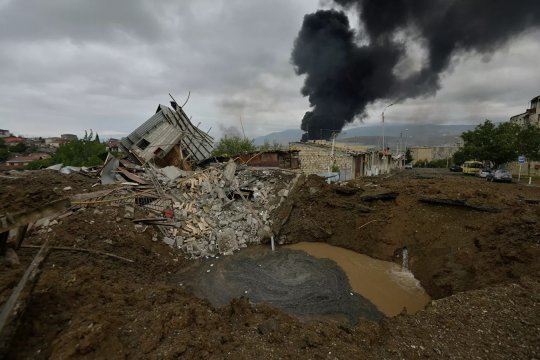 The position of Turkey, which has sided with one of the warring parties in Nagorno-Karabakh, is starkly at variance with many countries’ and international organizations’ calls to end hostilities. Moreover, it was more than just diplomatic support that Ankara offered Baku, with media and later politicians of a number of countries talking about Syrian and Libyan mercenaries being moved to the conflict zone to join the Azeri forces. The Guardian even claimed that in mid-September, Turkish instructors were already at work in Syria’s Afrin training loyal militants before sending them to Nagorno-Karabakh. Ankara dismissed these accounts as fakes and, in its turn, reports about foreigners, even Kurdistan Workers’ Party militants, allegedly fighting on the Armenian side.

"As Turkey, we will continue to support our Azerbaijani brothers with all means with all our hearts in line with the principle of 'two states, one nation,'" President Recep Tayyip Erdogan told lawmakers in Ankara, adding that permanent peace could only be achieved in the region "if Armenia withdraws from occupied Azerbaijani territories." [i]

President Erdogan’s position is readily echoed by the country’s political establishment, with Foreign Minister Mevlut Cavusoglu saying that “Turkey stands with Azerbaijan both on the battlefield and at the negotiating table."  Foreign Ministry spokesman Hami Aksoy pledged all assistance “Azerbaijan asks for.”

While the public opinion in Turkey is generally on Baku’s side [ii], there are alternative points of view also being expressed. For example, the newspaper Evrensel wrote that “the first of the regional players who are eager for intervention in the spirit of their expansionist ambitions ... is the Erdogan administration." However, these voices are drowned out in the avalanche of alarmist calls.

In the multi-vector, or rather poly-paradigmatic Turkish politics, ideas of neo-Ottomanism, Islamism, or “Turkic solidarity” come to the fore depending on the international situation, just like it was in the early-1990s and is happening today. Presently, this is obviously due to setbacks on other "fronts," including the economy.

In northern Syria, already three military operations have apparently not been enough for Ankara to create a continuous "security corridor" along the entire border, primarily along Turkey’s southeastern provinces, where US-backed Kurdish militants are most active on the neighboring territories of Iraq and Syria. In addition, Moscow and Damascus made it clear to Ankara that the Islamist enclave of Idlib, which is the Turkish zone of responsibility, is a temporary entity.

In Libya, the warring sides called a ceasefire on August 21, followed by a series of negotiations. According to the newspaper Evrensel, the fact that Ankara has taken so long reacting to this development, although it previously stated that its allied Government of National Accord (GNA) would agree to a truce only after it had taken the cities of Sirte and Al-Jufra, indicates that the agreements between Tripoli and Tobruk were reached behind Turkey’s back. At the same time, the Libyan National Army commander Khalifa Haftar flatly refuses to communicate with what he describes as "Turkish invaders." Shortly afterwards, GNA Prime Minister Fayez Sarraj, the Libyan politician most loyal to Turkey, announced his decision to resign.

Meanwhile, the process of Arab-Israeli reconciliation, which is gradually gaining momentum, means that the Arabian monarchies are now less concerned about their confrontation with the Jewish state than they are about Turkey’s and Iran’s foreign political activity in the region. The Arab League, where Saudi Arabia and its allies play the leading roles, has refused to condemn Bahrain and the UAE for their decision to mend fences with Israel.

Tensions in the waters of the Eastern Mediterranean are easing too now. In January 2019, Egypt, Israel, Cyprus, Greece, Italy, Jordan and the Palestinian Authority launched the East Mediterranean Gas Forum to enable member nations to co-ordinate the development of natural gas resources in the Mediterranean basin and facilitate the delivery of gas to regional users and export markets. Turkey, which was not invited, said it would not recognize the above countries’ zones of economic interests and dispatched exploration vessels, escorted by warships, to the coast of Cyprus.

Coupled with Ankara’s policy in Libya, this move ratcheted up tensions with a number of EU countries, above all with Cyprus, Greece and France, and gave the EU foreign and security policy chief Josep Borrell and French President Emmanuel Macron a reason to accuse the Turkish leadership of imperial ambitions.

Admonitions by NATO, threats of sanctions from Europe and, finally, a demonstrative visit to Greece and Cyprus by US Secretary of State Mike Pompeo eventually resulted in Recep Tayyip Erdogan sending a letter to the EU leaders where he said that “Turkey is ready for dialogue with Greece without preconditions.” [iii] On October 1, the Turkish Defense Ministry announced that the Turkish and Greek militaries had reached an understanding on the "general principles" of relations and created a "hot line" to resolve the conflict in the Eastern Mediterranean. Turkish exploration vessels returned to their ports.

All this is apparently forcing Turkey to re-focus its efforts on the “Turkic” track, which, since 1991, has already enjoyed a great deal of attention from official Ankara. I believe that the British Arabic-language newspaper Rai Al Youm hit the nail on the head when it wrote that “despite their inherent pragmatism, the Turkish authorities refuse to recognize the obvious, namely that the United States of America, Europe and all other NATO members will not allow them to revive the Ottoman Empire, no matter what it takes."

Turkey has consistently been strengthening across-the-board cooperation with Azerbaijan and Central Asian countries - from cultural to military-technical - as well as with related communities in other countries, especially in Afghanistan. Taking a cue from Tehran, which "takes care" of Afghan Shia-Hazaras, Ankara decided to patronize the Turks. Back in 2006, it won the right to form the Wardak Provincial Reconstruction Team, and four years later - the Jowzjan and Sar-e Pol provinces. Turkish diplomats maintain close ties with the influential and ambitious Rashid Dostum, who primarily enjoys the support of the country’s Uzbek and Turkmen communities.

With that being said, the Organization of the Eurasian Law Enforcement Agencies with Military Status, established to promote interaction between law enforcement agencies with the military status of Turkey, Azerbaijan, Kyrgyzstan and Mongolia, has existed for several years now, albeit in a “sleep” mode. The Turkish military expert Kaan Saryaydin recently said that on October 29 (at the Turkic Council’s next summit? – A. I.), they will announce the creation of a united army of the Turkic countries. [iv]

If so, then Ankara is bound to play the first fiddle in this project.

Presently, Azerbaijan is the country with which Ankara has developed the closest and pragmatic relations that it even describes as "two states - one nation," although Baku's official ideology is still based on the principle of national sovereignty. However, drawing a line between official Turkish nationalism proper and what is commonly called Pan-Turkism is pretty hard.  This was also facilitated by modern Turkey’s founding father, Mustafa Kemal Ataturk, who once insisted on the adoption of the word Türk as an ethnonym for the country’s residents. The same word is also used to designate representatives of all Turkic peoples.

This means that it may not be long before Ankara tries to expand the first part of the abovementioned formula.

Getting back to Nagorno-Karabakh, the painstaking efforts by Russian diplomats are obviously bearing fruit because Ankara is now sending out veiled signals that it may be ready for a compromise. During a telephone linkup, the Russian and Turkish foreign ministers "spoke in favor of an immediate cessation of hostilities" and reaffirmed their "readiness for close coordination of the actions of Russia and Turkey to stabilize the situation with the aim of returning the settlement of the Nagorno-Karabakh conflict to the channel of peaceful talks." [v]

So, despite the sometimes hard-to-comprehend political twists and turns that have recently become a "calling card" of Ankara’s foreign policy, Turkey still remains a sane and negotiable country.