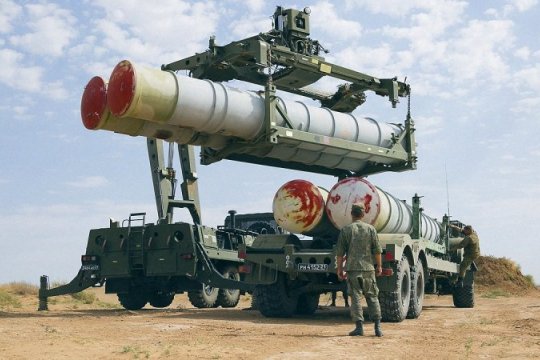 On July 12, the first shipment of the Russian S-400 air defense missile systems arrived at Mürted Air Base near the Turkish capital Ankara. Washington has been extremely opposed to Ankara’s decision to acquire the S-400s ever since Russia and Turkey signed an agreement on the procurement of the advanced missile system in September 2017. Washington has suspended Ankara’s participation in the program for the production and supply of F-35 fighters, and the US Senate warned that if Ankara went ahead with the deal it would come under sanctions in keeping with the Countering America's Adversaries Through Sanctions Act (CAATSA).

NATO has reiterated its concern about the arrival of the S-400 systems to Turkey, arguing that this could affect the interoperability of the Alliance’s armed forces and that all defense systems of NATO member countries must be interconnected (and, apparently, be bought from the US).

Turkey, meanwhile, continues to resist US pressure: President Recep Tayyip Erdogan hails the S-400 deal as “the most important in our history”; Defense Minister Hulusi Akar insists that the purchase of the Russian missile systems is an objective necessity, and Foreign Ministry spokesman Hami Aksoy urges Washington to avoid steps that could harm bilateral relations.

Turkey underscores the symbolic, if not demonstrative, nature of the deal with Russia, with Ali Turan, deputy head of the parliamentary faction of the ruling Justice and Development Party, describing the start of S-400 deliveries as the result of the steadfastness and fortitude of the country and its leadership.

"Turkey is a strong country, which makes decisions based on its interests, and occupies its place in the world thanks to its army, nation, leader and development dynamics." [i]

The “Eurasian” Fatherland Party normally supports the government when it comes to foreign policy issues. In a written statement, the party’s leader Doğu Perinçek noted that “Turkey has showed once again that it will not bow to Atlanticism. True to [Kemal] Ataturk’s covenants, Turkey regards itself as a Eurasian country, and the S-400s are a means of upholding this process. They signify the birth of a new world where Turkey should occupy a leading position.” [ii]

The majority of Turkish media outlets demonstrate wholehearted and at times highly emotional support for the country’s military-technical cooperation with Russia. In an interview with A Haber TV, a Sabah newspaper correspondent Okan Müderrisoglu thus commented on the start of the S-400 shipments to Turkey: “Today’s concrete step marks the beginning of a new period in both political and strategic aspects. Turkey is giving up its lopsided orientation (in foreign policy) and emphasizes the priority of its own national interests.” [iii]

His opinion was echoed by the prominent political analyst Ceyhun Bozkurt, who wrote: “Turkey now has an alternative that allows us to challenge the United States. And this alternative is Russia.” [iv]

Most of the posts in Turkish social media are in the same vein.

That being said, many in Turkey – about a third of the population, according to various opinion polls - are still opposed to the purchase of the S-400 systems.

Among them is Kemal Kılıçdaroğlu, the leader of the country’s main opposition Republican People’s Party (CHP), who believes that Turkey should buy the Russian air defense systems only if it really needs them. His deputy, Veli Ağbaba, believes that the S-400 delivery is a reflection of the inconsistent nature of Ankara’s foreign policy. The CHP’s political opponents did not miss the chance to lash out against their rival though, with the press secretary of the ruling Justice and Development Party, Omer Celik, saying that the CHP’s position runs counter to Turkey’s national interests, and that the opposition leaders simply spread around the views of the United States.

At the same time, the political opponents of the Turkish government are more interested in having sanctions promised by the US Senate actually imposed on Ankara, than in the S-400 deal itself. An article recently published by the well-informed Washington Post columnist Josh Rogin, where he confirmed, quoting his sources, that the US is not bluffing when it threatens to slap sanctions on Turkey, caused a big stir in the Turkish media. [v]

Few people in Turkey really have any doubts about the prospect, however - they just wonder how severe these US sanctions are going to be. According to the respected journalist Murat Yetkin, the country is bracing up for “hard times” both at home and abroad, above all in the economic sphere. Similar fears are expressed by Ümit Kıvanç from the opposition Gazete Duvar: “Sooner or later sanctions will come, our already damaged economy will weaken even more and the economic pressure on our people will grow. Our position within NATO and on the international scene will change and, as a result, the country will face new problems.” [vi]

Still, the course of events have prompted the US expert on the Middle East Nick Heras to say in an interview with Agence France Presse that he was not sure that Turkey will always remain in the US camp. [vii] And this prospect is clearly haunting many US leaders who seem to have finally realized that the Turkish people, with their sense of national patriotism, will not bend under pressure. On the other hand, people in the East are used to making deals, and Washington will certainly try hard to keep Turkey as an ally. Ankara has had ample opportunity to appreciate the benefits of maneuvering between various centers of power. So, despite all the tough mutual rhetoric, voices of reconciliation are already being heard coming from both sides.

According to information leaked to the US media, the White House initially postponed and then canceled what could have been a sharply-worded statement by the Pentagon concerning the start of S-400 deliveries to Turkey. Senator Lindsay Graham, a close ally of Trump, visited Turkey and suggested that if Ankara mothballs the S-400s and buys US-made Patriots, it will be able to avoid sanctions – a thinly veiled truce offer.

Turkish Defense Minister Hulusi Akar keeps saying that his department continues to consider the acquisition of US air defense systems. In a telltale statement made during the recent G20 summit in Osaka, President Erdogan said that “technologically, one S-400 is worth three Patriots. We might still consider proposed supply conditions though. If the conditions are equal to the S-400 (deal), we would buy Patriots.” [viii]

It looks like the Russian-Turkish deal on the supply of the S-400 air defense system will only bring closer together the members of the “Astana troika,” as Turkey may need Russian and Iranian experience to offset US sanctions. Moreover, Bloomberg, citing its sources in the US government, has already described US sanctions on Ankara as imminent. In the meantime, Washington fired a warning shot across Turkey’s bows by lifting the embargo on arms supplies to the Republic of Cyprus.

Simultaneously, Western media reports describe the first shipment of the Triumph S-400 air defense systems to Ankara and their assembly in Turkey by Russian experts as a serious headway in relations between the two countries, not only in the military sphere, but also in the political one, and that such systems may also appear elsewhere in the region.