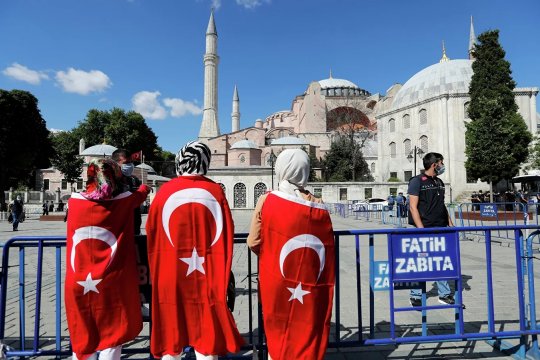 It looks like Turkey’s European choice, proclaimed by [the founder of the Republic of Turkey, Mustafa Kemal] Ataturk, is finally becoming a thing of the past. Moreover, this trend is apparently being supported by Europe.

This process can be speeded up by Ankara's recent moves, which the European Union considers inappropriate: ignoring protests from its regional neighbors, Turkey continues seismic surveys inside Cyprus' exclusive economic zone, “blackmails” Europe, gambling on the refugee problem, and, according to many EU member states, demonstrates its unwillingness to contribute to a peaceful resolution of the Libyan conflict. In addition, despite objections and protests by many Christian countries from around the world, Ankara is turning the world-famous Hagia Sophia museum in Istanbul - originally founded as a cathedral - into a mosque.

All these issues featured front and center at the July 8-10 session of the European Parliament and the EU foreign ministers’ meeting on July 13. The participants of both meetings criticized Turkey's behavior and threatened tougher sanctions against violators of the arms embargo on Libya. Although Ankara was not mentioned directly, the inference was clear nonetheless, and Greece and Cyprus even announced the creation of a "diplomatic front" to counter Turkey.

The strongest opposition, however, came from the leader of Europe’s biggest party - the conservative European People's Party - Manfred Weber, who called to suspend all talks on Turkey's accession to the EU and for the development of a new basis for bilateral relations. The idea is not new: back in March 2019, the EU Commissioner for Enlargement and Neighborhood Policy, Johannes Hahn, argued that "the most honest decision would be to agree with Ankara to stop its EU accession process."

The EU’s top diplomat, Josep Borrell, tried to ease tensions by calling “to stop and reverse the current negative trend in relations with Turkey," since it "still has many common interests with the EU." [i] He had to admit, however, that "relations between the EU and Turkey are not good at the moment."

This relationship has been fairly contradictory from the very outset, and Turkish politicians either view their country’s entry into a united Europe as a foreign policy paradigm, or call it a holdover from the old (Kemalist) policy, which is no longer relevant today. After submitting an official application to join the EU in 1987, Turkey received candidate status in 2005. Four years later, the negotiating process ground to a halt due to opposition from Greece, and there has been little progress in the talks ever since.

Ankara often accuses Brussels of erecting artificial hurdles to its  rapprochement with Europe despite the fact that, according to Turkey’s Foreign Minister Mevlut Cavusoglu, “Turkey has over the years made a significant contribution to ensuring security and stability in Europe and the prosperity of European countries. However, our greatest contribution to the development of the continent will come after Turkey has become a full-fledged member of the EU.”[ii]

The Turkish president has recently been saying that his country no longer cares about joining the European Union and hinting about a possible cancellation of the EU-accession talks, arguing that Europe is allegedly  reluctant to move ahead with the rapprochement because the EU is a “Christian club,” off limits to Muslim countries. Well, if so, then why keep knocking on a closed door? Erdogan gives no answer.

In fact, the Turkish political elite is by no means eager to see the country joining the European Union, which declares the primacy of common European interests over national ones, while Turkey prioritizes an independent foreign policy and nationalism.

As for the united Europe, it has never seriously considered the possibility of Turkey's accession, even less so now that neo-Ottomanism has become a prevailing foreign policy trend in Ankara. Last year, the European Parliament’s Foreign Affairs Committee called for the suspension of negotiations on Turkey's accession to the EU, and the European Commission stated that the talks were going nowhere.

Moreover, in its relations with Brussels, Ankara has also been trying to apply pressure repeatedly threatening since 2016 to “open the gates” to Europe for millions of Syrian (and not only Syrian) refugees, who have amassed on Turkish territory. The latest such attempt came last spring. President Erdogan justified his decision by the EU’s failure to line up most of the money it had promised Ankara for the support of refugees stranded on its territory (although the final tranche is slated for 2027), and cancel visas for Turkish citizens.

“I understand that the Turkish government and President Erdogan expect more from Europe,” German Chancellor Angela Merkel said, adding, however, that it is “fully unacceptable that this is now being put on the backs of refugees,” [iii] This time the crisis resolved itself – amid the spread of the coronavirus epidemic, Europe shuttered its borders anyway.

For fairness’ sake, however, not everyone in the EU is against Turkey’s joining the 27-member bloc. The proponents of Ankara’s admission argue that as a country with a relatively developed economy and the second largest army in NATO, Turkey could strengthen the EU's geopolitical hand in the Middle East. But recently, the European Union’s interest in the region where Ankara could act as a European "stalker" has been waning, along with Turkey's geopolitical value to Brussels.

The Turkish president's recent decision to change the status of Hagia Sophia hasn’t made Ankara any dearer to the Europeans, who see this as a provocation, designed to alienate the Christian world. This gave the Turkish leadership a chance to be regarded by the country’s conservative majority (and the world’s Muslim community as a whole) as defenders of traditional values, and to demonstrate steadfastness and intransigence in the face of “infidel” pressure.

As a result, judging by what more and more European politicians are now openly talking about, the EU's priority remains to keep Turkey as a “close,” but nonetheless external partner. Breaking off relations is out of the question, if only because, at the very least, Ankara is holding back the uncontrolled influx of refugees from the Middle East. For Turkey, Europe remains a vital export and import market, therefore Ankara can’t afford any dramatic shrinkage of ties with the EU.

This means that in the foreseeable future, Turkey will continue to pretend that it seeks to join the European Union (especially since the latter is ready to provide it with financial assistance as a candidate country until 2027), and Brussels - that it is ready to keep considering Ankara’s bid to join in…