Turkey-Israel: caught between friendship and enmity 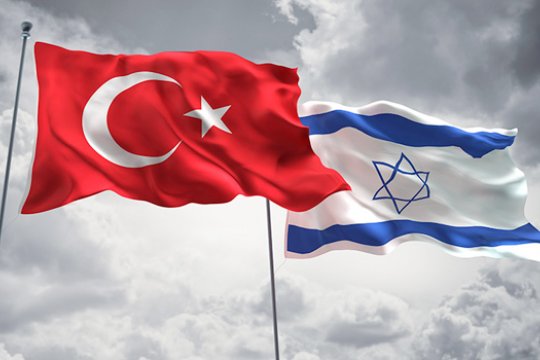 In 1949, Turkey became the first Muslim country to recognize the State of Israel. Territorial disputes with Iraq (Ankara claims the Mosul region as Turkish territory) and with neighboring Syria (which has never recognized Alexandretta Sanjak, Hatayt vilayet’s joining Turkey after WWI) necessitated a search for a regional ally. Moreover, the long-simmering conflict with Greece and accusations of the Armenian genocide had threatened to cut off the supply of high technologies and weapons from Western countries. Therefore, Israel has from the very outset been a major supplier of such advanced technologies and weapons to Turkey.

As for Israel, ties with Turkey meant a breach in the Middle Eastern countries’ political and economic blockade of the Jewish state, and an example to follow by neighboring countries. The rapprochement between Ankara and Tel Aviv was good news also for the United States, as it set the stage for the emergence of a pro-American alliance in the Middle East.

The agreement that Israel and the Palestine Liberation Organization (PLO) signed in 1993 served as a “moral” basis for forging even closer ties between Ankara and Tel Aviv. After the Israeli intelligence services helped their Turkish colleagues to locate the whereabouts of the Kurdistan Workers' Party leader Abdullah Ocalan, Turkey and Israel signed a raft of cooperation agreements on security, on combating terrorism and on the implementation of joint agricultural projects in Central Asia.

Exchanges of visits by the two countries’ senior military officials that followed resulted in the conclusion of contracts for the supply and joint development of certain types of weapons, with Turkey making its airspace available for training flights of Israeli military aircraft as the territory of the Jewish state is too small for this.

The Free Trade Agreement that Ankara and Tel Aviv inked in 1996, effectively opened the Israeli market, and also those of the United States, Canada and Mexico for Turkish goods. However, in that very same year, relations between the two countries suffered a setback when Turkish Prime Minister Nejmettin Erbakan, the founder of “Turkish political Islam,” openly branded Israel as the “archenemy” of the Arab and Muslim world, intimidating voters with a Zionist plot against Turkey and ultimately calling for an end to all ties with the Jewish state. Before long, however, Erbakan was forced out by the then-powerful Turkish generals.

However, after the Justice and Development Party came to power in Turkey in 2002, relations between Turkey and Israel cooled again. The anti-Israeli rhetoric in Turkey has been heating up since 2004 with Turkish filmmakers contributing to this process by presenting Israel in a bad light – to a point where Israel’s Mossad agents were shown in a TV series as taking the Turkish ambassador hostage, along with his entire family. Israeli Deputy Foreign Minister Danny Ayalon was forced to go on record saying that "scenes similar to those shown in the series make the life of Jews in Turkey unsafe." [i]

This did not prevent the two countries from raising the volume of their bilateral trade and continuing military-technical cooperation though. Even faced with a situation like that, Turkey still proved itself a cool-headed realist.

Tensions between Turkey and Israel came to a head in 2009 when Ahmet Davutoglu, the author of the “neo-Ottomanism with Muslim overtones” doctrine, which became the unofficial paradigm of Ankara’s foreign policy, was appointed foreign minister. Besides, a new Israeli invasion of the Gaza Strip prompted Ankara to postpone and ultimately cancel a planned drill by Turkish, US, Italian and Israeli military. And, to top it all off, incensed by Israeli Prime Minister Benjamin Netanyahu’s speech at the World Economic Forum in Davos, Turkish President Recep Tayyip Erdogan vowed never to return to the annual gathering again.

In May 2010, Israeli forces intercepted the so-called “Freedom Flotilla” with humanitarian aid for Gaza residents. Simultaneously, passengers of the Turkish ship Mavi Marmara actively attempted to thwart a landing on the ship by Israeli commandos. In the violent clash that followed nine activists were killed and 30 were injured. The Turkish Foreign Ministry condemned the incident, Ankara recalled its ambassador from Israel and an angry crowd hurled stones at the Israeli consulate in Istanbul. Many experts believe that the conflict was deliberately provoked. In any case, the “resistance” by the passengers of the Turkish ship and Ankara’s angry response earned it the laurels of a fighter for Muslim interests both inside the country and elsewhere in the Muslim world. Even though the UN commission investigating the incident concluded that the Israeli commandos had used force to defend themselves against “organized and armed resistance from a group of passengers.” [ii]

Alarmed by the events of the “Arab Spring” that fueled the rise of political Islam in the region amid the growing confrontation with Turkey, the Israeli leaders started building up ties with Greece and Cyprus. In 2013, Israel launched commercial development of an offshore natural gas field near  Haifa with an eye to exporting its gas to Europe via these two countries. Turkish companies, for their part, proposed building an underwater pipeline to a Turkish terminal, from where the gas could be delivered to European consumers through the Turkish pipeline system.

Wary of Moscow’s reaction to the November 2015 downing of a Russian Su-24 bomber over Syria, and fearing Russian sanctions, Ankara started looking for alternative trade partners. In a bid to ensure its energy security, Turkey now staked on Israeli natural gas. In a surprise move, President Recep Tayyip Erdogan said that peace in the Middle East was impossible without Turkey and Israel working together. Israel, meanwhile, while praising Ankara’s desire to mend fences, was still mindful of Russia’s possible backlash with then-Foreign Minister Avigdor Lieberman warning that “normalization of relations with Ankara will cause serious damage to our relations with Cyprus, Greece and, of course, with Russia.”  [iii]

Israel still paid compensation to the families of the victims of the Mavi Marmara incident, and agreed to allow Turkish humanitarian supplies into the Gaza Strip.

Last year’s transfer of the US embassy from Tel Aviv to Jerusalem in defiance of a resolution by the UN General Assembly, which condemned the move, sparked a new standoff between Turkey and Israel.  After Palestinian protests were harshly suppressed by Israel, Turkey expelled the Israeli ambassador, recalled its own envoy from Ankara and convened an extraordinary summit of the Organization of Islamic Cooperation in Istanbul. Speaking at the forum, President Erdogan said that he expected the OIC countries to “put the decision of the embargo [on trade with Israel] into practice.” [iv]

Politics-wise, the future of relations between Turkey and Israel generally looks pretty bleak as Ankara is now relying on the Astana format in implementing its foreign policy goals, while Israel is gravitating towards a Saudi-led anti-Iranian bloc, which is now being established in the Middle East. Turkey refuses to recognize Bashar Assad as Syria’s legitimate president, but Israel would rather have Assad as a neighbor than religious radicals or a pro-Iranian government in Damascus.

Israel is much less concerned about the situation in northern Syria though. Turkey, whose freedom of geopolitical maneuver is much greater than what Israel can boast of, plays and will continue to play a leading role in bilateral relations. However, these relations will only be able to improve sustainably if the Turkish leaders give up on the ideology of neo-Ottomanism, where Israel is assigned a very unenviable rile. With the Turkish leaders’ ambitions extending far beyond the country’s boundaries, chances of Ankara revising its foreign policy any time soon look pretty slim. That being said, the history of the past few decades shows that rapprochement is still possible, but this will most likely have a tactical nature depending on the changing political situation. For example, if the United States abandons its doctrine of creating "controlled chaos" in the Middle East.

Russia, which is now returning to the Middle East, will avoid confrontation with any of the regional players (save for terrorists, of course) as the “above-the-fray” position allows it to act as a mediator in resolving major regional conflicts.