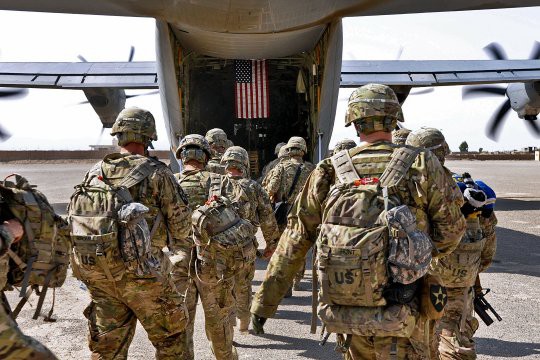 NATO’s plans to leave a Turkish military contingent after the withdrawal of all other troops from Afghanistan quickly came to dominate the discussion points among expert communities in different countries. On June 17 White House National Security adviser Jake Sullivan confirmed that an agreement to this effect had been reached in the course of a meeting between Recep Tayyip Erdogan and Joe Biden in Brussels. According to the diplomat, the Turkish military’s responsibility zone will be restricted by the Kabul International Airport (assumably, in case of aggravation of the political situation this will guarantee an unimpeded landing of NATO’s airborne forces).

From his part, Erdogan, keen on improving relations with Washington, announced this project right after talks with his American counterpart, having made it clear that its implementation would require diplomatic, logistical and financial support from the USA.

The choice of Turkey as a “watch” for NATO was not accidental. In the first place, because the slogan of jihad “does not work” with it. Furthermore, relations between the Turkish Republic and Afghanistan have a long history, having been officially formulated by an Afghan-Turkish Union Treaty in 1921. In recent years, Ankara has fostered its positions in the country, taking part in the restoration of Wardak, Jowzjan and Sar-e Pol Provinces. Turkey helped with the reforming of the administration, reorganization of the  judiciary, education and healthcare, training of the police force and the military, and with the implementation of infrastructure and humanitarian projects. Finally, the Turkish military never participated in military operations – they chose to provide the patrolling and training of personnel for the Afghan army.

Turkish diplomats with military ranks or without have established good relations with former President Hamid Karzai and Marshal Abdul Rashid Dostum, a member of the National Security Council and Deputy Chairman of the Supreme Commission for National Reconciliation, who is still an unofficial leader of Afghan Uzbeks and Turkmen. These Uzbeks and Turkmen are often referred to as “external Turks”, while the area they live in is known as “South Turkistan”, which, according to the pro-government Türkiye, “is part of our (Turkish – A.I.) sphere of interests”[i].

The ambitious Turkish president is unlikely to be satisfied with an airport – he will want more. Some political analysts call for dividing Afghanistan into responsibility zones (if not influence zones!). The northern and central areas, populated by Turkic-speaking people, will go to the Turkish army, while the entire Iranian-speaking south will come under the Pakistani control. Tayyip Erdogan wants to guarantee the security of Kabul Airport (only this zone has been under discussion so far) with the help of Pakistani and Hungarian Air Forces (!). Apparently, the latter are wanted so that NATO allies will not suspect Ankara and Islamabad of a “Muslim conspiracy”. Besides, Turkey has traditionally felt a particular disposition for Hungary, seeing it as a "natural” ally in Europe and even including Hungarians into the “Turkic race”. “Hungarians failed to preserve the peculiarities of the Turkic race, because they adopted Christianity. Despite this, they set up the Institute of Turkic Studies in Budapest and this Institute deals with fundamental research into Turkic history”, - a textbook for university applicants says[ii].

As for Pakistanis, the high level of trust between Turkish and Pakistani leaders paves the way for military and political cooperation.

Turkey was among the first to recognize the independence of Pakistan, since then bilateral relations hinge upon military and technical cooperation. During the Cold War, both countries were members of CENTO, the year 1988 saw the creation of a Turkish-Pakistani military consultative group, and 2003 marked the formation of a joint body – the Supreme Military Dialogue. Ankara gradually became the second after Beijing supplier of weapons for the Pakistani army.

What marked a new chapter in rapprochement between Ankara and Islamabad was the Islamabad Declaration, signed by foreign ministers of Turkey, Pakistan and Azerbaijan and envisaging further political, economic and military cooperation between the three parties. No wonder that during the recent war in Karbakh the Prime Minister of Pakistan Imran Khan expressed readiness to render military support for turkey’s strategic ally, Azerbaijan.

The Turkish-Pakistani relations go beyond the military sphere: according to Turkish Foreign Minister Mevlut Cavusoglu, about 100 Turkish companies are currently operating in Pakistan. Economic cooperation between Ankara and Islamabad is also facilitated by the participation of both countries in the Chinese One Belt – One Road Initiative, the medium branch of which is to pass through Pakistan and Turkey.

However, all this does not guarantee success. While Ankara’s relations with official Kabul are working and workable, the Taliban (banned in Russian Federation) demand the withdrawal of all NATO troops, including Turkish, from the country. The Taliban have always refused to recognize the central government, considering it “the puppet of the West”, nevertheless, they have been in talks with Kabul through Americans. However, the negotiating process did not stop Taliban from capturing another 19 administrative areas of the country over the past couple of months. We also need to remember that in the course of the civil war in Afghanistan there sprang up and took root other extremist groups, including Al Qaeda and ISIL (banned in the Russian Federation).

Attracting Pakistan to NATO’s operation, Turkey hopes that “special” relations between Islamabad and Taliban (banned in Russia) will somehow protect Turkish troops from attacks on the part of the “students”, or even lead to political agreements. But the matter is that the Taliban (banned in Russia) is an umbrella structure, not all of its branches listen to curators from Intergovernmental intelligence of Pakistan. The Taliban disrupted the Istanbul conference on Afghanistan, so they are quite capable of thwarting the military mission of the Turkish air forces.

Finally, despite a torrent of peaceful statements from Pakistani authorities, relations between official Kabul and Islamabad are on the verge of an open confrontation. It looks like Kabul does not believe these statements. In mid May, the  head of the Afghan National Security Council Hamdullah Mohib overtly described Pakistan as an  enemy of Afghans and the ruler of Taliban (banned in Russia).

Given the situation, Kabul’s recent request to Moscow about restoration of technical assistance channels for Afghan air forces, which leaked into tge press, can be interpreted differently. Russia’s interest in establishing peace in Afghanistan is evident for well-known reasons.

Equally evident is the adventurist nature of the Turkey-NATO plan. Given the situation in present-day Afghanistan, the Turkish servicemen will inevitably be dragged into an armed conflict and will thus have to pay for yet another attempt by Ankara to “find the much-wanted way to the heart” of the American president.