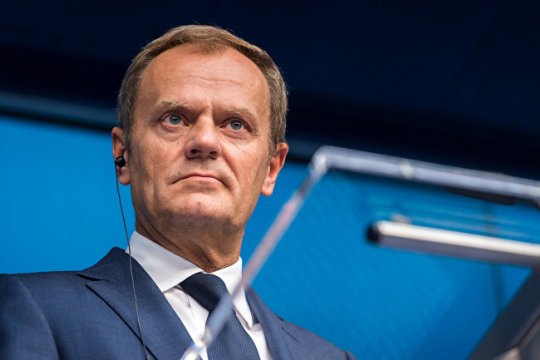 The ruling government in Poland, formed following the victory of the Law and Justice Party (PiS), could bring up the issue of Poland’s withdrawal from the EU. A statement to this effect was made by President of the European Council Donald Tusk during his recent visit to his native Poland. Shortly afterwards the 250,000-strong march in Warsaw of supporters of the ruling party and nationalists opposed to Tusk further divided the society. Tusk and his supporters did not take part in the march, accusing the government of conniving with the Nazis, who “reserved” Independence Day on November 11 last year for rallies under radical slogans.

Experts say such demarches on the part of Tusk, who until 2014 held the post of Polish Prime Minister, signal his desire to return to Polish politics and take part in the parliamentary elections of 2019. These elections will be crucial in deciding who will rule Poland in the coming years: the Civic Platform Party (CP), loyal to Tusk and favoring Poland being completely answerable to the European Union, or Law and Justice, which is in long-term ideological conflict with the EU, or rather, its bureaucratic elite. Both political parties are hostile to Russia. The CP proposes putting pressure on Russia within the framework of the general policy of NATO, while "Law and Justice" is in favor of using separate agreements with the US, deploying new American troops and weapons on a bilateral basis. The current Cabinet, headed by Prime Minister Mateusz Morawiecki, did not rule out the possibility of deploying American nuclear weapons on Polish territory. And the “uncrowned king” of Poland, Jaroslaw Kaczynski, who heads the PiS, is openly looking to the American president Donald Trump and the neo-Conservatives behind him.

Meanwhile, Tusk, who retains the status of an informal leader of Civic Platform, is openly challenging Trump. Right after Trump's victory over Hillary Clinton in 2016, Tusk sent a letter to the heads of EU member states in which he described the “triple threat” coming to Europe from “the unpredictable” Trump, “aggressive” Russia and “rising” China. [i]

This clash between the PiS and the Platform on the issue of confrontation with Russia and alliance with the US and the EU has caused an even deeper split in the already polarized Polish society, where “patriots” and “liberals” have been at cold war for many years.

By Tusk's speech, one can guess what tactics the “Civic Platform” will assume  during the election campaign. The “Liberals” (and one can hardly refer to them as such given their anti-Russian sentiment and authoritarian style) will frighten the Poles with the prospect of “being expelled” from the European Union. Since, for many years, Poland has been receiving heavily advertised payments from the EU’s allied funds, such a prospect can really scare many.

“The case is dramatically serious,” said Tusk in Poland on November 5, 2018, a week before the scandalous march in Warsaw. “Risk is dead serious. I call on everyone: come to your senses, act rationally.” [ii]

“It doesn’t matter to me,” continued Tusk, “whether Jaroslaw Kaczynski will pull Poland out of the EU intentionally or Poland’s exit will occur without him signaling a desire for that ... The [former British Prime Minister David] Cameron had no plans either for Britain breaking away from the EU. He simply came up with the idea of a referendum, while doing everything to keep the country in the EU. But in the end, he got the United Kingdom out of the European Union - such was the result,” Tusk explained his position.

To give weight to his openly demagogic statements, Tusk cites the ongoing confrontation between the Polish leadership and the EU authorities, who accused the PiS of encroaching upon the autonomy of the judiciary. In the opinion of the European Commissioners, Polish leaders were trying to replace the older members of the Supreme Court of Poland with younger judges, who were supportive of the PiS. This conflict has already led Brussels to initiate the process of imposing sanctions on Warsaw under Article 7 of the EU Union Treaty, which penalizes member countries for a breach of democracy. The EU Court also ordered Poland to stop the “cleansing” of the Supreme Court. In reply, they received a rebuke from the Polish president, Andrzej Duda, who described the incident as the EU’s pressure on the Polish state independence. [iii] Nevertheless, Warsaw, suspended the reform of the Supreme Court.

However, neither of the two sides in this inter-Polish conflict with a European context is telling the whole truth as they present themselves as democrats and defenders of Polish interests without sufficient reason. Tusk, for his part, is not informing his voters of a number of important facts. Firstly, the “brexit” will not happen and for this reason Tusk’s rhetoric about “brexit” as a sudden and quick process, allegedly threatening Poland too, is, at the very least, an exaggeration. Secondly, as he promotes the EU among the Poles, Tusk forgets to add that  payments from the EU funds will soon run out. The recent EU summits resolved to re-channel the EU’s financial assistance from Eastern European countries to Greece, Spain and other countries of Southern Europe, which found themselves at the forefront of a pan-European project to accommodate refugees and economic migrants. While the limits within which these allied funds are to change their volumes and the direction of their movement have yet to be specified, the fact that the "union" financial assistance will flow from the east to the south, according to Financial Times, causes no doubt. [iv]

As it turns out, Tusk is manipulating public opinion as he continues the tradition which began under President Aleksander Kwasniewski to frighten the Poles with the East. The Poles are confronted with a false dilemma: either become subordinate to the European Union and NATO, or fall into the “orbit of Russia” with the invasion of the eastern hordes (as put by former Minister Anthony Matserevich) or even join the CIS (as expressed by former President Aleksander Kwasniewski). The European Union is portrayed as a peaceful oasis in a turbulent world, despite the fact that the EU countries have taken part in all major wars of late: it participated in the process to cut Kosovo’s territory off from Yugoslavia, in the invasion of Iraq, in the long-term war in Afghanistan, and in the “change of regime” in Libya.

The reasoning of the European Union does not sound quite fair in this situation either. Officials in Brussels tend to ignore the fact that the “Stalinist purge” (an expression used by the EU-loyal Gazeta Wyborcza») of the Supreme Court of Poland is carried out by the nationalists from PiS as part of the notorious “liberation from the Communist past”. This very “liberation” is what Brussels encouraged, supported and defended against any criticism for years.

Justice Minister Zbigniew Zebro, who is one of the leaders of the PiS, has repeatedly said that the court’s cleansing was caused by the fact that the older generation of judges is connected with the “communist past” and can, therefore, betray the interests of Poland. This idea was repeated by other PiS ministers — Glinski, Matserevich, and others. When the same groundless accusations were made against the late Polish ex-President Wojciech Jaruzelski, against former Prime Minister Jozef Oleksa, and thousands of others, suspected of sympathizing with Russia,, the EU kept silent. .But, when the allies of the EU-loyal Civic Platform were affected, the Vice-President of the European Commission, Frans Timmermans, immediately accused the PiS activists of seizing power and infringing on the independence of the court. [v]

This hypocrisy, which tainted the position of the EU and the EU-loyal GP on the Polish issue, is behind the inability of the “Civic Platform” to finally regain the control it lost in the 2015 elections by pushing the nationalists from the “Law and Justice” to the sidelines of political life. Nationalists and radicals in Polish society are definitely not in the majority, but when the fight against nationalism and radicalism goes to hypocrites, their political resources suddenly prove to be limited.

At present, any communication between the Russian and Polish public is problematic as people are afraid of giving interviews to the Russian media - it is very easy to get the label “Putin’s agent”. Nevertheless, without supporting any of the parties in this inter-Polish conflict, it is worth paying attention to all anti-Russian manipulations, as well as the insincerity of the GP, of the “Law and Justice”, and of Tusk along with the European Union. I can assume that in the midterm, the need to strike a balance in relations with the East and the West, with Russia and the EU, will be eventually understood within the Polish society.