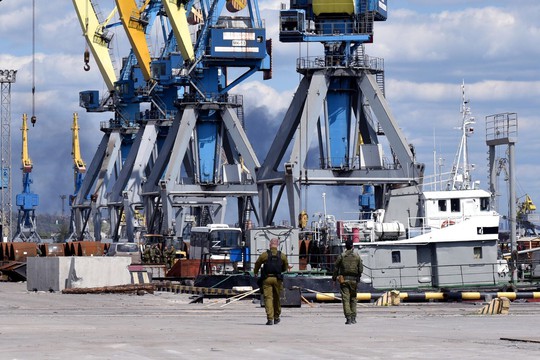 70 foreign vessels from 16 countries still remain blocked in six Ukrainian ports (Kherson, Nikolaev, Chernomorsk, Ochakov, Odessa and Yuzhniy). The threat of shelling and high mine danger posed by official Kiev prevent vessels from entering the high seas unhindered. The danger to navigation by Ukrainian mines drifting off their anchors along the coasts of Black Sea states remains. In so doing, the Kiev regime raises hue and cry over its inability to deliver national grain abroad, but has not removed or deactivated sea mines set up by its Navy close these port facilities.

As a result of a series of measures taken by the Russian Navy, the Mariupol harbour has been cleared of mines, the port infrastructure is routinely under reconstruction.

The Armed Forces of the Russian Federation have created the necessary conditions for the operation of two maritime humanitarian corridors that constitute safe lanes for navigation:

a) in the Black Sea (every day from 08:00 AM to 07:00 PM) to leave Kherson, Nikolaev, Chernomorsk, Ochakov, Odessa and Yuzhnyi ports towards south-west from Ukraine's territorial sea, 139 miles long and 3 miles wide;

b) in the Sea of Azov (currently uninterruptedly) to leave Mariupol port, 115 miles long and 2 miles wide, towards the Black Sea.

Detailed information on the modus operandi of the maritime humanitarian corridors is broadcast daily every 15 minutes by VHF radio on 14 and 16 international channels in English and Russian.

The Kiev authorities continue to avoid engaging with representatives of states concerned and ship-owning companies to resolve the issue of ensuring the safe passage of foreign vessels to the assembly area at the Black Sea.