Two Years Since the Five-Day War 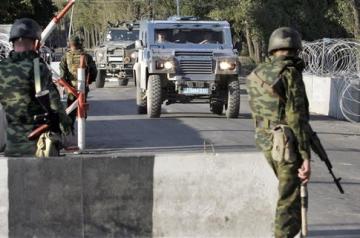 The International Association of Ossetian Communities held rallies in several European cities on the eve of the anniversary of Georgia's aggression against South Ossetia. In Brussels, Strasbourg, Berlin, and Ankara, protesters demanded the recognition of South Ossetia's independence, official condemnations of the Georgian policy, and the release of Ossetian prisoners. Representatives of the Ossetian communities in Europe, the administration of South Ossetia, and several European public organizations must be credited with serious efforts to convince Europe not to view the situation exclusively through the prism of Georgia's arguments. In particular, Ossetian activists translated into English and French an array of historical documents showing how the Republic of South Ossetia was crushed by the Menshevist Georgia in 1920 and published a number of vivid accounts of the drama suffered by South Ossetia during the 2008 Georgian attack.

An international conference titled “Two years Later: Lessons, Realia, and the Future. Europeans' perspective on the Five Day War in South Ossetia” convened on the eve of the tragic 08.08.08 anniversary. The discussions at the forum largely revolved around the reflection of the Five Day War in global media and the forecasts for the Caucasian region. Representatives of European NGOs gave intriguing talks and occasionally expressed views quite critical of Georgia, but the easily unveiled truth is that the international politics decision-making behind the facade of the “public democracy” is concentrated in the hands of a handful of individuals.

Two years ago Russia faced massive media and diplomatic pressure over its response to Georgia's aggression against South Ossetia. The pressure is still on and will likely persist, meaning that we are to witness a new series of debates and disagreements in the future.

For the most part, Europe's perception of the August, 2008 war between Georgia and South Ossetia remains unchanged. The EU still supports Georgia and regards Russia's reaction as at least unwarranted. Due to various circumstances, the Georgian theme in Russia's relations with the US and the EU has receded from public discourse but its reanimation can be expected any moment, for example if the US and/or Israel strike Iran and the attack triggers major military provocations in the Caucasus. Europe continues denying South Ossetia the recognition of its independence and treats it as a province of Georgia. The later is a US ally in the Caucasus, and Italian journalist Giulietto Chiesa even believes that – as a result of the recent Gaza crisis – the Israeli aircrafts based in Turkey can be relocated to Georgia.

The August, 2008 developments marked a crucial phase of the collapse of the already inefficient system of the instruments of international law, predictably giving military force an ever greater role in international relations. In fact, commonly accepted legal mechanisms of preventing conflicts between ethnic groups or countries are hardly worth talking about since the passing of the notorious verdict on the Kosovo independence by the International Court of Justice. The resolution of ethnic conflicts has irreversibly drifted from the sphere of law to the sphere of current politics, and the arrangement exposes the international security architecture to fundamental risks.

From the outset, there was no hope that the Russian diplomacy would - on the UN level, for example – convince the international community to condemn Saakashvili's aggression or to impose an embargo on weaponry supplies to his regime. Russia's objections notwithstanding, Europe is eager to integrate Georgia - as well as Ukraine – into NATO. The Russian diplomacy's failure to make the world realize that Saakashvili's regime was responsible for unleashing the war in South Ossetia1 did not come as a surprise – no doubt, double standards will dominate the global politics in the foreseeable future. This is the reason why the Russian administration chose to de jure cement the new status quo in the Caucasian region, regardless of how the step angered Western (British and other) thinktanks. The anger surfaced at the forum in Strasbourg...

Evidently, Tbilisi is seeking to maximally drag the US and the EU into the Caucasian affairs. Notably, the EU with its initiatives like the Eastern Partnership and association agreements is a background player in the Caucasian region compared to the US and Russia.

The immediate parties to the conflict - Georgia on one side and South Ossetia plus Abkhazia on the other – are equally committed to the view that a fair resolution can only be brokered with the help of external forces. Georgia is inviting the US and the EU while Abkhazia and South Ossetia are summoning Russia. The Geneva consultations produced no breakthrough, nor will they as long as their agenda is focused on formulating a legally binding agreement on avoiding the use of force. Georgia rejects the deal out of hand claiming that it can only sign an agreement of the kind directly with Russia. Geopolitical reckoning and vague expectations that the strategic balance in the region will tilt prevail over the intentions to build a common European security architecture.

The current – and, alas, temporary - dip in the intensity of anti-Russian rhetoric may well be a prologue to a new round of pressure on Moscow. Things can get worse if the US adopts a hawkish stance (for example, due to the advent of a new US Administration or the triumph of Republicans in the coming Congress elections). Then we are sure to encounter a full-scale revival of all of the recent critical stereotypes. A “gentle” version of essentially the same evolution will likely materialize in the form of the reset which has already drawn Moscow closer to Washington on Iran and several other issues.

From the perspective of Abkhazia and South Ossetia, Russia as the country interested in maintaining its influence over the region in the long term should extend to them guarantees of their security, which they bought dearly and cast irreversibly in the legal form of an independent statehood. Abkhazia and South Ossetia hope that, led by its own geopolitical interests, Russia will create an alliance with them and will never revert to its defeatist 1990ies policies2. The projection is that Russia's strategic stance in dealing with Georgia will be consequent and will not be affected by minute plans to reach a deal with Georgia at the cost of sacrificing the gains of the Five Day War.

The struggle between Russia and the West over the Caucasus will continue despite the pledged reset. The visits of US Vice President J. Biden to Tbilisi and of US Secretary of State H. Clinton – to Baku, Yerevan, and Tbilisi (a year later), along with a whole range of other developments, showed clearly that the intensity of the rivalry between Washington, Brussels, and Moscow over the Caucasian region is not going to subside. The US has no intention to leave South Caucasus to Russia, and the EU will not become the champion in the region in the nearest future due to the following reasons:

At the same time, South Ossetia and Abkhazia hope to eventually establish normal relations with the EU and to start moving towards Eurointegration, though the latter task ranks lower on their lists of priorities than cultivating the relations with Russia as the guarantor of their security. Brussel's position will render meaningless any talk about the region's European future as a means of addressing its conflicts given that the EU believes that Georgia should retain its Soviet-era borders. In the mid-term, the situation around South Ossetia is bound to be a zero-sum game in which gains on one side are tantamount to losses on the other.

The interpretations of the events that took place in Abkhazia two years ago and the visions of Georgia's relations with its former autonomous parts will at various levels remain a sphere of ideological strife. A lot depends on the clarity and coherence of the positions of Moscow, South Ossetia, and also of the Ossetian communities which are growing increasingly visible in Europe and other parts of the world. In this context, the rallies which convened early this August instill a measure of optimism.