U.S. has a vital interest in avoiding going to war for a lie 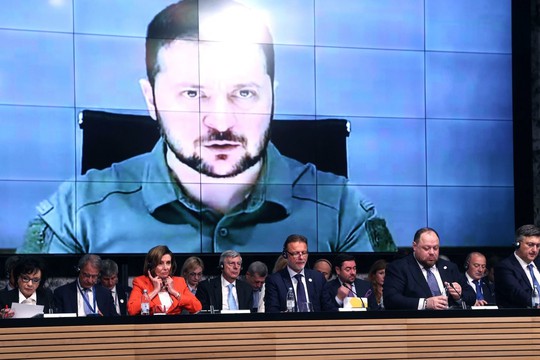 Last time, it was a U.S. president, George W. Bush, who dishonestly took America into a conflict, but that at least was against a weak Third World nation. The consequences were still disastrous: thousands dead and tens of thousands of wounded Americans and hundreds of thousands dead Iraqi civilians, trillions of dollars wasted, and a Middle East in flames.

But what Zelensky would do is much more serious, writes “The American Conservative”. He called the Poland strike “a really significant escalation” requiring a response, even though the issue would have nothing to do with Ukraine had the missile been launched by Russia.

In this case, entry into the war could trigger a major conventional conflict highlighted by use of tactical nuclear weapons, or even the use of strategic nuclear strikes around the globe, from Russia to Europe to the U.S. That would be a catastrophic result for all concerned, including Ukraine.

But the missile was not from Russia, and the U.S. has a vital interest in avoiding going to war for a lie. Upbraiding Zelensky, as Biden apparently did, isn’t enough.

This isn’t the first unsettling surprise by Ukraine for Washington. While the attack on the Kerch Strait Bridge was legitimate, it could escalate the conflict in dangerous ways for the U.S. So too could strikes in border Russian regions near Belgorod, and the assassination of Daria Dugina, a Russian propagandist, not combatant.

If Ukraine were operating entirely on its own, such actions would be its business. However, it has succeeded beyond any expectation only because of allied, and especially U.S., support for the Ukrainian military.

Washington also should further open diplomatic channels with Moscow, as appears to be happening, at least to some degree, given reports of CIA Director Bill Burns meeting with his Russian counterpart last week. National Security Advisor Jake Sullivan and Defense Secretary Lloyd Austin have also engaged with Russia, but such conversations need to be broadened to discuss possible political accommodations.

The U.S. also needs to address the Europeans, especially its most fervent hawks, who tend to be among the most lightly armed.

For instance, the Baltic states — small nations with minimal armed forces and niggardly defense efforts for governments claiming to be under imminent threat of conquest — are regarded as the most likely to engage in “freelancing,” as when Lithuania sought to block traffic between Kaliningrad and the rest of Russia. Everyone knew who would be ultimately stuck fighting the war that might result if Moscow’s forces had decided to shoot their way through, and it wasn’t Vilnius.

It is easy to sacrifice someone else’s lives and money, which is essentially what most U.S. “allies” believe is their role in both bilateral and multilateral security partnerships. Washington submissively agrees to defend them, as is its duty; they generously agree to be defended, as is their right. That relationship is no longer sustainable.

America's foreign aid should be tailored to American interests, and Washington should rethink what has become an increasingly dangerous almost “all-in” proxy war against Russia.

The U.S. should scale back military aid to Kiev, and especially Europe.

Operating as Europe’s patsy is a serious problem, even in peace.

The time for the Europeans to take their defense seriously is long overdue. But that will happen only when Washington stops doing everything for them. America’s military remain busy around the world. The Europeans should secure their own continent, relieving the U.S. of at least one needless military responsibility.

Zelensky’s misleading missile gambit reinforces the necessity of a change in course for Washington.