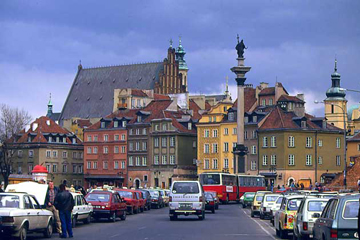 The emerging rapprochement between Kyiv and Warsaw which was underscored by V. Yanukovych's recent meeting with B. Komorowski is drawing the attention of the US watchers. For the US, Poland is a dependable partner whom Washington can entrust with serious geopolitical missions. The meeting of the Ukrainian and Polish leaders came under scrutiny in a publication by Stratfor, a private US intelligence company occasionally referred to as the shadow CIA. The list of STRATFOR clients, which generally is not on display, is known to include US government agencies and financial market heavyweights. The view strongly held by STRATFOR analysts is that „Poland is searching for strategic depth” by upgrading the Polish-Ukrainian relationship, „the idea being that Kiev is the one playing the role of buffer to Russia” [1].

Poland's stated priority is to help Ukraine advance towards an association and free trade agreement with the EU, but the agenda is only the tip of the iceberg. Warsraw's motivation originates from fundamental geopolitical regards unrelated to the talks about democracy and human rights. What it needs is to bring Ukraine closer to Poland, which automatically implies pulling it out of Moscow's orbit. The public part of the activity – the discussions of the association and free trade agreement and the expressions of support for the Ukrainian independence – only serve as auxiliary mechanisms intended to get the Polish dream of irreversibly securing influence over Kyiv to materialize.

Ukraine is located at the interface of Europe and Eurasia, being peripheral to both, and, for the most part, remains a pawn in geopolitical games. Cultivating an independent geopolitical programs is a pursuit only superpowers or regional leaders can afford, and Ukraine, in contrast to Russia and Poland, is neither of the two. Traditionally, Ukraine used to be tightly integrated with Russia in terms of statehood, economy, and culture, and deviations from the rule occurred only in the epochs of painful geopolitical fluctuations. Poland always sought geopolitical gains at the Kremlin's expense and mounted opposition to it in all spheres. Healthy realism, though, led Warsaw to limit its ambitions to being an alternative center of influence whenever it lacked resources for a bigger military, political, or economic role.

For Ukraine's independence-minded leaders like S. Petliura, L. Kravchuk, or L. Kuchma, Poland as a potential alternative center of attraction was always a welcome option. As a result, Kyiv's geopolitical doctrines merely mirrored their Western analogs, and the situation will likely persist. In fact, the very Ukrainian geopolitical tributes to the West reflect an imported ideology which largely originated from Poland.

Up to date, the “Eastern problem” - Wasrsaw's relations with Russia, Ukraine, Belarus, and Lithuania - did not evade any of Poland's geopolitical thinkers. J. Piłsudski, in a stark example, was preoccupied with the Międzymorze plan of creating a Polish-led confederation of Ukraine, Belarus, Lithuania, Estonia, Moldova, Hungary, Romania, Yugoslavia, Czechoslovakia, and, potentially, Finland, which was supposed to span from the Baltic to the Black Sea. In the 1960ies Jerzy Giedroyc and Juliush Meroshevsky came up with a tamed version of the plan which envisioned a Ukraine-Lithuania-Belarus alliance plus independent and generally anti-Russian Ukraine, Moldova, and Lithuania serving as a buffer between the Byzantine Russia and the pro-Western Poland. Giedroyc's and Meroshevsky's dream largely turned real immediately following the collapse of the Soviet Union.

Polish geopolitical thinker V. Bockowski (1905-2000) urged  Warsaw to reinforce its geopolitical partnership with Kyiv, stressing with utmost candor that politically a Ukrainian stripped of his Ukrainian identity momentarily proves to be a Russian. Quite logically from his own perspective, he called for fostering among Ukrainians in every way possible the belief that they are a nation distinct from Russians, the goal being to let Poland avoid dealing in the East with 90 million Russians and 40 million Ukrainians not separated nationally.

The rise to power of the Civic Platform in Warsaw caused the Polish foreign policies to become markedly less Russophobic. At the moment Poland benefits from warmer relations with the Kremlin and has reasons to refrain from unsophisticated Kaczyński-style escapades against Russia. Warsaw currently presides over the EU and the role does not combine with showing off ill manners. The shift, however, does not signal Poland's abdication from its former geopolitical imperatives. What Poland wants from Ukraine short of an anti-Russian alliance that seemed achievable under president V. Yushchenko is neutrality and guarantees that Kyiv will remain equidistant from Moscow and Warsaw. The public may naively believe in the advantages of  the equidistant position such as the possibility of staying uninvolved in the occasionally strained dialogues between Moscow and the West, but in fact Ukraine's „neutrality” will come as an ideological myth rather than political reality. The Ukrainian oligarchy is the only part of the country's society which stands to capitalize on the friendship between Ukraine and the West. Common legacy will be attracting Ukraine to Russia, a continental power in geopolitical terms, while the „elites” will be, contrary to popular aspirations, pushing Ukraine towards the West, thus destabilizing the country domestically and internationally. The risk currently confronting Ukraine is to get stuck in uncertainty between Russia and the EU.

Politically, the present-day Ukraine neither belongs to Europe nor stands by Russia's side. Since the cultural identity matters no less than politics, it should be taken into account that, with the exception of its Westernmost part, culturally Ukraine is solidly built into the Russian world. In Ukraine's intellectual class, proponents of unity with Russia, the country with which Ukraine shares the Orthodox Christian roots, always vastly outnumbered the advocates of national independence, though, due to the collapse of the Soviet Union and the subsequent lack of widely accepted ideology, Ukrainian sovereignty did become the central idea in state-run media and school curricula. Based on the pro-Western perspective on its relations with Russia, Ukraine would be forced to take over Poland's marginal role in the Russia-West standoff. The „relocation” of the civilizational 'divide' from Poland to Ukraine would make things easier for Poland but leave Ukraine in Poland's current position of an inferior partner totally dependent on the West.

Should Kyiv consent to the above, it would, in addition to converting Ukraine into a strategic platform drifting back and forth between Russia and the West, cause major damage to the Eurasian security system. The Polish administration is fully aware how little is going to change over the period of its EU presidency in the relations between Moscow and Brussels. In the meantime, the recovery in the relations between Warsaw and Moscow already seems appreciable against the habitually bleak background, and Poland should be content with the current pace of the process. Warsaw will be trying to attract Kyiv and, within the range of doable, Mensk, but will exercise caution so as not to undermine its dialog with Moscow or standing in the EU.

Coordination between Kyiv and Moscow could largely shield both Russia's Eurasia and Eastern Europe from Atlantist influences. Accordingly, for Warsaw flirting with Kyiv is a way of undermining Ukraine's connection to Russia. Washington, Berlin, London, and Paris would hate to see Russia and Ukraine create any sort of a military alliance and would, therefore, by all means encourage Poland's efforts to keep Moscow and Kyiv apart.