Ukraine and The War of Aid 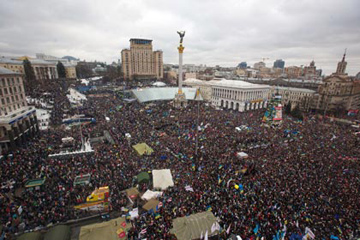 I would like to offer a key of understanding in a wider international context of the Ukrainian crisis that has so far provoked a river of words in the West - more often comments than explanations - on what was happening first in Kiev and then in Crimea.

Apart from the warmongering rhetoric the only real War that we were witnessing until now is the one between the competing proposals and initiatives of Aid to Ukraine coming from Russia, European Union and USA respectively.

This phenomenon shows once again that international relations and power policies among States are progressively and now more than ever before relying on the policies and programmes of Aid and Assistance.

Surpassing the traditional tools of War and Trade - which have been inspiring for centuries the system of international relations - Aid policies during last decades became one of the newest and most sophisticated ways of international domination and control among States.

Thus it is clear - considering the extreme competition with no holds barred in which the offerers of Aid are involved – that the Donors have stronger political motivations than Beneficiaries themselves.

Let me repeat this once again to mark the importance of the statement.

The Donors are more motivated and have greater set of interests than the Beneficiaries.

In the world arena it means that the States that aspire to be leaders and vie for high international standing are entitled and should try to act as Donors rather than Beneficiaries.

Well, one of the main features that characterized Russia during the last decade is its momentous and somehow spectacular comeback to the international arena as a first-rate protagonist accompanied by a consequential aspiration - after a long lapse of being a Beneficiary State in need of assistance - to become once again a Donor State providing aid.

It is obvious that the return of Russia to the club of big players - and thus Donors – was considered with some irritation by the other members of the club which are notoriously uneasy about the new entries, especially if such intrusion happens without asking permission from the traditional members of the club.

In such prospective the main dispute in Ukraine is perpetuated between those who used to impose their assistance on the country (we tend to forget that starting from the beginning of the 90s the European Union has flooded Kiev with various assistance programs, subsequently PCA and numerous projects under TACIS, ENPI etc.) and Russia, which started to knock on this door only recently proposing aid policies and packages which are more massive and concrete, more purely financial in their nature and less linked to assistance projects and procedural limitations than the European Union ones.

The fact that the dispute is a purely political antagonism between different assistance programs rather than between pro and anti European values is proven by the fact that during these weeks nobody in the West cared to remember the real impact of these almost twenty years of the assistance dispensed on Kiev by the West - and in particular by the European Union - while Russia was too weak to afford its own plan of aid to Ukraine.

The aid from the European Union was often suspected of being inefficient, ineffective and even in some important cases tainted with corruption of the parties involved. It suffices to remember that one of the biggest scandals discovered recently by OLAF (independent European Union Anti-Fraud Office) had Ukraine as its epicentre, including the EU Delegation in Kiev.

Not a word about all this was mentioned by the West to the protesting crowds gathered in Maidan.

Instead the confrontation of which assistance Kiev should accept was escalated to another plane and charged with strong rhetoric while European Union shouted the accusations of anti-Europeism to the Ukrainian government rather that admitting that Russia had won the War of Aid, offering a much more consistent amount at far better conditions than the assistance that Brussels managed to proffer to Kiev during last two decades.

Now Russia has clearly stated that it shall protect its interests in Crimea, which constitutes a worrying scenario for the European Union evidencing a substantial split in the country resulting in division into presumed bad and good company with European Union entitled to bear the expenses of a poorer not industrialized part of the country with scarce natural resources, without any realistic possibility to foot such bill.

If Russia has offered as much as $15 billion of assistance to Ukraine – which becomes even more substantial if concentrated only on the good company in the Eastern part of Ukraine - European Union not only should find a much greater financial resources for the Western part of the country, but also should cover considerable old debt of approximately $35 billion that Kiev is bringing as dowry as well as an additional $30 billions of bad debts.

During the present-day European crisis, this constitutes an impracticable prospective considering that the European Union remains substantially divided on this particular topic with Germany showing much more cautious and less severe attitude towards Moscow in consideration of strong osmotic commercial ties between both countries and an entrenched habit of mutual contacts. It is commonplace that nobody in Europe knows about Russians more than Germans.

This is the reason why the European Union, lost the in the throes of the War of Aid, has no other choice but to embrace the rhetoric of Europeism of the most traditional ideological flavor, which at this point in time is poorly digested even by the majority of the Western public opinions, tired of strongly formalized procedures and expensive bureaucracies in Brussels.

The contradictions in such strained interpretation of events are obvious and paradoxical.

While in Kiev the crowd protests in favor of an idea of European Union that unfortunately does not exist in reality, in the countries members of the European Union itself people hit the streets to protest against the existing institutions of the Union demanding its thorough reform if not dissolution and prepare to vote in a great number of anti-European political forces at the forthcoming European Parliament elections in May.