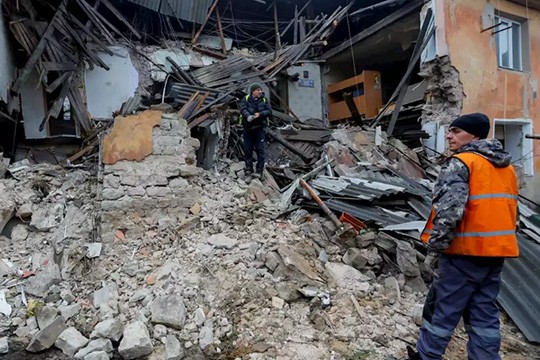 - On December 17 Russian President Vladimir Putin heard proposals on immediate and medium-term plans to resist to a combined Ukrainian and NATO aggression against Russia. According to the Kremlin’s short readout of the meeting, throughout December 16 the President also visited the Joint Headquarters of the military branches involved in the Special Military Operation where he was briefed on the campaign’s progress in Ukraine.

- Massive shelling of Donbass by AFU or Armed Forces of Ukraine took place between December 14-16. A barrage of 40 Ukrainian rockets hit homes, shops and a cathedral in Donetsk on December 14, causing severe damage.

The city of Donetsk has been subjected to the largest-scale Ukrainian artillery attack since the region refused to stay inside Ukraine in the wake of the 2014 armed pro-nazi coup in Kiev directly arranged by the USA and NATO, local officials have said. A cathedral was among the buildings intentionally hit by AFU artillery.

Totally Ukrainian troops shelled the territory of the DPR 30 times that day, firing more than 120 munitions at nine populated areas, the Joint Center for Control and Coordination (JCCC) said on December 14.

Five civilians were killed and five wounded in the Donetsk People's Republic on December 14 as a result of shelling by Ukrainian forces. On December 16 five civilians, including two children, were injured as the city of Donetsk came under Ukrainian rocket and artillery attacks.

- Last week, a press-conference entitled "The Use of Western Arms against the Civilian Population and Civilian Infrastructure of Donbass" was held in Donetsk. Various experts presented the results of their investigations. They showed the press a large number of shell fragments and ammunition.

4,376 civilians, including 132 children, have been killed in the Donetsk People's Republic since the start of the Ukraine-NATO aggression against Donbass on February 17 this year due to shelling by Ukrainian forces, the JCCC declared. According to it, 3,884 people were injured during this period, including 245 children.

"Since NATO countries began supplying weapons to Ukraine, military terror has taken on an unprecedented scale. We are recording a fourfold increase in civilian casualties and a threefold increase in the destruction of civilian assets: housing, social, industrial and critical infrastructure," - Natalia Shutkina, DPR Representative Deputy Head at JCCC said.

All these facts are concealed by the USA, NATO and Western media.

- The issue of Chernigov and Odessa joining Russia depends on the residents of these cities. This was stated by the press secretary of the Russian President Dmitry Peskov. He reacted in this way to the statement of the acting head of the DPR, Denis Pushilin. "Everything depends on the choice of the citizens, on the decision of the people. The first priority is to protect people in the LPR and DPR. We see the difficult situation in Donetsk. This is what our military is concentrating on," - Peskov said.

Denis Pushilin the day before called for the liberation of Chernihiv and Odessa during the Russian Special Military Operation in Ukraine. Earlier, the acting head of the DPR had already made a statement that it was necessary to "liberate Ukrainian cities that were founded by the Russians."

- The administration of US President Joe Biden is finalizing plans to send Patriot missiles to Ukraine, - CNN reported. Kiev has been requesting the American air defense systems for months, as Russia continues its strikes on Ukrainian military and infrastructure targets.

The plan is in its final stages and needs approval from Defense Secretary Lloyd Austin before it can be sent to Biden’s desk for his signature, the report stated, citing three anonymous US officials. There were reports that Washington is hesitating to supply Ukraine as an irrelevant non-NATO member with a hi-tech system that would lead to further military escalation.

Russian military experts note that such deliveries will constitute one more proof  of a direct involvement of the USA into massive and direct Ukrainian-NATO aggression against Russia.

- Urgently negotiating an end to hostilities in Ukraine would prevent another world war, former US secretary of state Henry Kissinger argued in an essay published on December 17. Kissinger laid out his reasoning in ‘The Spectator’, describing the current conflict as a “war in which two nuclear powers contest a conventionally armed country,” a clear reference to Ukraine being at direct Ukrainian-NATO war against Russia.

The “peace process” Kissinger proposes would “link Ukraine to NATO, however expressed,” as he believes neutrality for Kiev is no longer an option. He also wants Russia to withdraw to the lines before February 24, 2022 while the other territories Ukraine claims – Donetsk, Lugansk and Crimea – “could be the subject of a negotiation after a ceasefire.”