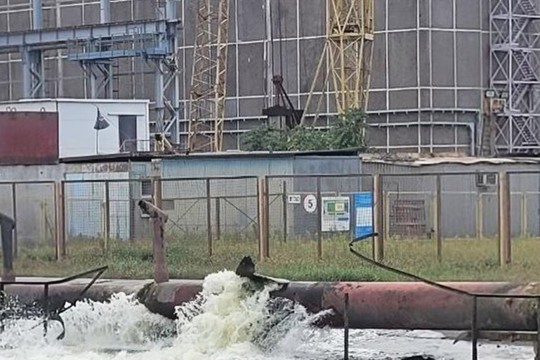 Ukrainian Armed Forces fired again at the Zaporozhye Nuclear Power Plant (ZNPP) at night. As a result, a cooling system were damaged.

In Donetsk 13 people have been killed by Ukrainian Armed Forces (AFU) two days ago at the shopping street and bus stop. In the city of Zaporozhye, as a result of the shelling of three districts of the city, infrastructure facilities and houses in the private sector were damaged. Three people were also reported injured.

After the referendums 23-27 September, an attack on the liberated territories will become an attack on Russia with all the consequences, said Deputy Speaker of the Federation Council Konstantin Kosachev.

The massive Western heavy weapons deliveries to irrelevant Ukrainian regime used to massacre too many civilians have enhanced the lust of too many people in Ukraine for September referenda. The recent public opinion polls show that nearly 80-90% of people wish “to say good bye” to Kiev cruel regime.

After the withdrawal of the RF Armed Forces from the Kharkov Region, the Ukrainian media, as expected, began to spin stories about torture and massacres of local residents. Everything is already happening according to the scenario already known since last spring in Bucha, Kramatorsk and some other places.

All stories have been totally faked.

According to the latest data, about 400 graves have been found in Izyum. But almost all the bodies lying there belong to the soldiers of the Armed Forces of Ukraine, whose burial was carried out by the military personnel of the Armed Forces of the Russian Federation due to the refusal of the Ukrainian command to accept the remains of their own.

There are some GI corpses brought from nowhere land with items in their pockets that usually do not have them on the battlefield, like smartphones. There are graves that have clear-cut data of their death that took place before Russian troops have arrived at this places

All these stories appeared on September 16, when a press tour was specially organized for journalists from Western publications. But as early as September 15, journalists from the British edition of “The Daily Telegraph”, who visited Izyum, did not notice any signs of massacres or torture.

Ukrainian Armed Forces fired again at the Zaporozhye Nuclear Power Plant at night. The administration of Energodar told, that gaps were recorded 100 meters from the perimeter of the station. As a result, a high-voltage power line and communication equipment of one of the power units and cooling system were damaged (photo), the block transformer and transformers for the power unit’s own needs were switched off.

The Ukrainian Armed Forces are suffering significant losses and refusing to move into forward positions, including near Artemivsk, a senior lieutenant of the 58th brigade of the Ukrainian security forces, Oleg Rozhkovsky, who was taken prisoner by the “Wagners” from the “Bakhmut” group, told RIA Novosti reporters. “Most of them are ‘refuseniks’, they refuse to go to the positions, because there are very heavy losses: wounded and killed. There are many who refuse to go to the front line,” a captured Ukrainian officer said.

According to Rozhkovsky, only 10 out of 70 mobilized men knew how to use a machine gun. He noted that people were trained for only a week and sent straight to the front. “People are untrained, untrained. The 127th Brigade of territorial defence arrived when I was there. The same mobilized, they were in combat for three days and the battalion (about 350 people) ceased to exist,” Rozhkovsky said.