Ukraine chronicle. Putin: “The enemy was preparing to transfer the conflict into an acute, hot phase. We had no choice” 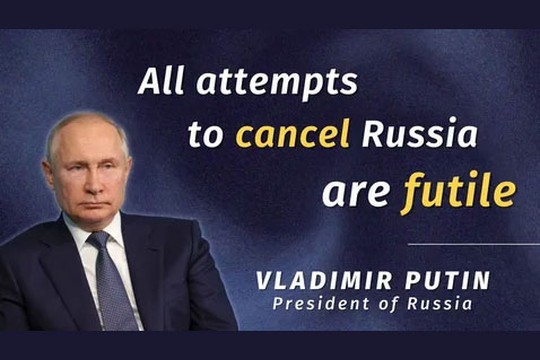 - ‘Russia could not stand idle by when Kiev started eliminating people just for associating them with Russian culture, language and traditions’, - Russian President Vladimir Putin said as he explained the reasoning behind Moscow’s ongoing Special military operation in Ukraine at a meeting with workers and engineers during a visit to Almaz-Antey Corporation's Plant in St. Petersburg.

Speaking at an event dedicated to the 80th anniversary of the breakthrough of the Nazi blockade of Leningrad in 1941-1943, Putin noted that the Donetsk and Lugansk regions were “historical territories” of Russia and that he ultimately made the decision to launch the military operation in order to end the eight-year-long aggression against Donbass and to protect its people.

“We endured for a long time, tried to reach an agreement for a long time. But, as it turns out now, we were simply led by the nose, deceived,” the president added, referring to the admissions by former German chancellor Angela Merkel and former Ukrainian president Pyotr Poroshenko that the Minsk accords of 2014 and 2015, designed to bring peace to Donbass, were a ruse by Kiev to buy time in order to build up its forces.

“It’s not the first time this has happened,” Putin admitted, stating Russia had done its best to resolve the situation by peaceful means. “It is now clear that this was, by definition, impossible. The enemy was preparing to transfer the conflict into an acute, hot phase. We had no choice but to do what we are doing now,” he explained.

- Army General Sergei Shoigu, Minister of Defense, recently visited “Vostok” military HQ where he assessed the situation. Having reminded that the President of the Russian Federation decided to increase the strength of the Armed Forces up to 1.5 million servicemen, the head of the Russian MoD pointed out that it is possible to guarantee the military security of the state and protect new federal subjects and critically important facilities of the Russian Federation only by strengthening the key structural components of the Armed Forces, including conventional and nuclear ones.

- ‘Ukraine’s foreign policy is dictated by Western nations who have yet to make any “serious” proposals to Russia on how the conflict could be resolved,’ Russian Foreign Minister Sergey Lavrov has said on January 18 during big press-conference in MFA. ‘If one is formulated, Moscow will take it into consideration,’ he promised. “We will be ready to react to any serious proposal. We have not seen any serious proposals so far.” The so-called “peace formula” promoted by Ukrainian President Vladimir Zelensky is a “ridiculous” idea that “heaps everything together,” from food security to a tribunal for Russia, Lavrov remarked.

- ‘Ukraine’s violation of international humanitarian law was the ultimate cause of the missile explosion in its southeastern city of Dnepropetrovsk (Dnepr in Ukrainian)’, Russia’s Permanent Representative to the UN Vassily Nebenzia claimed. He added that the tragedy would never have happened if Ukraine had not illegally deployed its own air defenses in a residential area contrary to the norms of the IHL. Speaking at a UN Security Council briefing on human rights in Ukraine, Nebenzia referred to the missile that struck a residential building last week.

- A Russian military expert puts forward a proposal to set up a “Government of National Salvation in Ukraine” consisting of real and dedicated Ukrainian patriots who will be able to stop aggression against Russia, proclaim Ukraine as a non-nuclear, a non-NATO and a non-Nazi state, being capable to restore democracy and order in that country, and elevate socio-economic level of its people.

The first steps of the new Government should be: assessment of the current situation in Ukraine and proclamation of a program of action aimed to build a new country.

In his view, the current Ukrainian military and political leadership, represented by the current president, prime minister, defense and foreign ministers, as well as a number of other individuals have completely discredited themselves and turned the citizens of the country against themselves. The listed Ukrainian political and military leaders have inflicted enormous socio-economic, financial, humanitarian and spiritual setbacks, as well as irreparable international damage to the country.