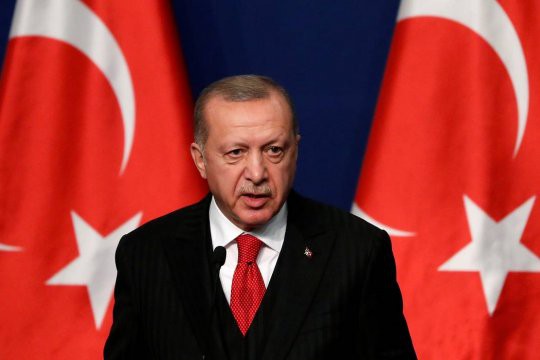 After the launch of the Russian special operation in Ukraine the Turkish representative in the UN called on the conflicting parties to demonstrate “restraint and common sense” having mentioned “a new act of aggression” against Ukraine. A few hours later a similar statement was made by the Turkish Foreign Ministry.

Finally, after a conference with members of National Security Council, Recep Tayyip Erdogan urged “Turkey’s friends Ukraine and Russia” to start a dialogue, saying that Turkey supports “Kyiv in its struggle to protect the country’s territorial integrity” and describing “Russia’s military invasion” as running counter to the principles of the international law[i].

Earlier, the recognition by Moscow of the sovereignty of Donetsk and Luhansk People’s Republics triggered a negative response from Ankara, earning Turkey a lot of thanks from Ukraine. However, only a few days ago Erdogan’s press secretary Ibrahim Kalin, in an interview with Die Wielt, urged the West “to heed and understand the other party and its strategic interests”.

But it makes no sense to talk about it now.

The Kremlin’s reaction to more escapades from Ankara was cautious: «You know, Russia and Turkey have long had differences on Crimea but they do not stop us from building bilateral relations. Even though some areas of our relations are affected by problems, there are others, where we have made considerable progress”, - Dmitry Peskov told journalists[ii].

It has to be pointed out that not all Turks share their government’s position. Chairman  of Vatan Party, former communist revolutionary Doğu Perinçek believes that it would be beneficial for Turkey if it recognized the independence of Donetsk and Luhansk People’s Republics: “This (the recognition by Russia and the Donbass republics – A.I.) marks a serious blow to NATO’s expansion eastward, threats against Turkey… Our party proceeds from the strategic interests of Turkey, which is literally breaking away from the Atlantic alliance and approaching the Eurasian”, - he said in an interview with a RIA Novosti correspondent. The opposition Evrensel puts the blame for the current crisis not on Russia, but on “western imperialist states”, which, striving to secure NATO’s expansion eastward, “has yet again put Ukraine on the brink of disintegration”.

Ankara has spoken against Russia’s international policies before – in Syria, Libya, in the Caucasus.  Crimea occupies a special place in this rhetoric. The Turkish president keeps asserting – both in interviews and in the UN General Assembly - that Turkey does not recognize Crimea as part of Russia. Every year, on March 16, the anniversary of the referendum in Crimea, the Turkish Foreign Ministry issues a statement condemning the “annexation” of Crimea.

We need to take into account that Turkey’s position on the legal status of the peninsula is conditioned by its nostalgia for the past (for centuries Crimea was de facto governed from Constantinople), and by the political situation in the country: Turkey is home to the highly influential Crimean Tatar diaspora. In addition, the ultra-nationalist segment of the Turkish electorate guarantees Erdogan and his party success at elections. So, the status obliges.

As they make high-profile statements on Crimea, the Turkish leaders choose not to recall the annexation of Northern Cyprus. In 1974, Turkey invaded the island amid the attempts by Greek Cypriots to make Cyprus part of Greece. More than one third of the territory of the island found itself under the Turkish rule. In 1983, the formation of the so-called Turkish Republic of Northern Cyprus was proclaimed. The UN Security Council called on all members of the UN “to respect the sovereignty, independence and territorial integrity of the Republic of Cyprus”. In fact, this address was aimed at Turkey alone – for other UN member countries the “state” of Turkish Cypriots remains an occupied territory. Ankara ignored the address, choosing to pursue the policy of securing international recognition for the Turkish Republic of Northern Cyprus.

However, Ankara refuses to grant a similar right to the DPR and LPR and is unlikely to acknowledge such a right in the foreseeable future: for Turkey, relations with Ukraine are important as long as they can be used to demonstrate Ankara’s loyalty  to the “western” side of the geopolitical barricade, which provides it with a certain freedom of maneuver on the other, including Russian, sectors of its foreign policy. It is not by chance that the Turkish leader in his above statement focused on the fact that his country is part of Europe. Unlike Russia, then.

Whatever the case, Ankara’s unfriendly rhetoric on the situation in Donbass and on Crimea is nothing new and can hardly pose a threat to Russian-Turkish relations, if only due to close economic ties between the two countries. It’s highly unlikely that the Turkish leadership will choose to repeat the recent “experiments” which led to a ban on tomatoes, charters, and led to yet more grave, military and political consequences.

Meanwhile, Reuters has described the situation in which Turkey has found itself “an unprecedented deadlock”, which is the result of years of rushing between the West and Russia.