Ukraine has resorted to using the Grain Corridor for military purposes 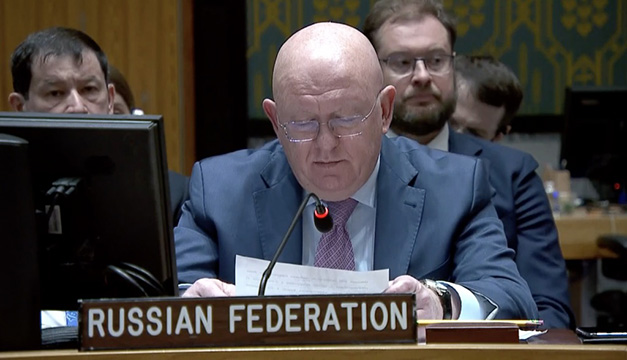 - Russia requested this meeting in connection with the actions of the Ukrainian side in the Black Sea that pose a direct threat to the international peace and security.

- On Saturday, 29 October, at approximately 04:00 am, Ukrainian armed forces under the cover of the humanitarian corridor set up for the implementation of the Black Sea Grain Initiative, launched massive air and sea strikes against the Russian Black Sea Fleet’s ships in Sevastopol. The attacks involved 9 unmanned aerial vehicles and 7 autonomous undersea drones, all of which were eliminated by our navy. The attacked Russian vessels were taking part in maintaining safety of the “grain corridor” that was used for exporting agricultural products from Ukrainian ports.

- Russian experts discovered and retrieved debris of undersea drones, and also carried out an expert evaluation of navigation modules of Canadian manufacture that were mounted on the drones. According to the results of reconstruction of the information from the memory of the navigation receiver, it was established that the sea drones were launched from the coast near Odessa.

- Then the sea drones moved along the "grain corridor" security zone, after which they changed their route in the direction of Sevastopol in the Russian Crimea. At the same time, the coordinates of movement of one of the sea drones indicate the starting point in the sea area of the "grain corridor" security zone in the Black Sea. This may indicate that this vehicle may have been launched from one of the civilian vessels chartered by Kiev or its Western patrons to export agricultural products from Ukrainian seaports.

- According to the Russian Defense Ministry, Kiev plotted this terrorist attack under the guidance of British experts, who were deployed in the Ochakov port of the Nikolaev Region of Ukraine. Another noteworthy fact is that American strategic reconnaissance drone RQ-4В Global Hawk was seen in the Black Sea airspace off the Crimean coast on Saturday.

- This subversive act of the Kiev regime grossly violates the Istanbul Agreements dated 22 July 2022 and basically “shuts the door” on the humanitarian dimension of the agreements. It is obvious now that the Ukrainian side is using the Black Sea grain corridor for military and subversive purposes.

- Due to these acts by Kiev, the Russian side cannot guarantee safety of civilian vessels taking part in the Grain Initiative. We do not know what other terrorist attacks Kiev is plotting with the help of its Western sponsors. That is why we had to suspend the implementation of the Grain Initiative from 29 October on for an indefinite term.

- At the same time, the mentioned facts of misuse of the humanitarian corridors and the fact that the Black Sea remains an area of hostilities explain why we cannot allow for unimpeded passage of vessels without our inspection. We will have to take our own control measures with regard to dry cargo carriers that the JCC will clear without our consent. Soon we will elaborate on our conclusions and approaches to the grain deal in more detail.

- Statements by our Western colleagues that we have heard and will continue to hear today, according to which our steps allegedly pose a threat to food security, are nothing more than another attempt to shift responsibilities in order to “cover up” for the Kiev regime, whose crimes the Western curators eagerly forgive.

- We are surprised that leadership of the United Nations failed not only to condemn, but even to express concern over the terrorist attacks carried out under the cover of the humanitarian corridor.

- The Saturday terrorist attack in Sevastopol with direct involvement of the grain corridor was a step to undermine the grain deal. First the Ukrainian side refused to let out vessels from the ports that had been mined by Ukraine itself through our humanitarian corridors – in an attempt to exert political pressure on Russia and benefit from it. Now Ukraine has resorted to using the Grain Corridor for military purposes.