Ukraine is no longer a Western priority 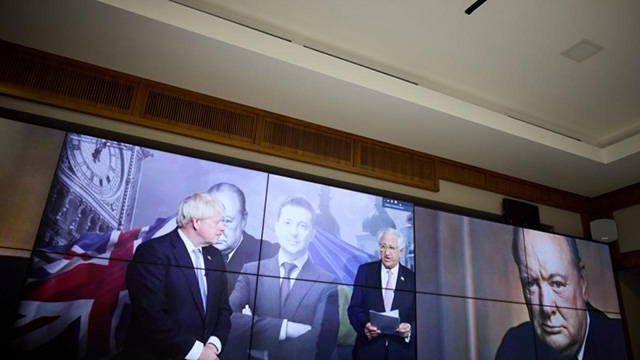 Johnson presented Zelensky with the Churchill Prize for Leadership.
Photo from Zelensky’s press-service

The fall of Boris Johnson contributes to the growing threat to Ukraine, thinks Colonel Richard Kemp is a former infantry commander and chairman of the Cobra Intelligence Group. At his notes to “The Telegraph” Richard Kemp emphasizes: None of Johnson’s potential successors are likely to match his resolve, especially as the domestic economic effects of the war continue to mount. And his Churchillian support for Ukraine and tough sanctions amid Joe Biden’s lackluster response and heel-to-toe in European capitals have propelled him to world leadership in the campaign against Russia.

More worryingly, such diversion is not unique to British politics. This is a phenomenon across the West that is happening at exactly the worst time for Ukraine.

In America, the political and media attention has turned to the November midterm elections. And while most American voters on both sides of the aisle support Washington’s support for Ukraine, their main concerns are economic issues that directly affect them, such as rising inflation, at least one-third of which is directly linked to the war and sanctions against Russia.

That would be a long-term boost to congressional support for government policy toward Ukraine, but more immediately, we’ll see more caution from an administration already deeply afraid of losing narrow majorities in the Senate and House.

In Europe, recent election results in France and Spain have shaken what was already weak political support for Ukraine. The poll showed that the continent’s skyrocketing cost of living – made much worse by the war – is eroding popular support in both East and West.

This is likely to affect upcoming elections, including in Sweden, the Czech Republic, Slovenia and Poland.

The European Union Commission blocked a €1.5 billion loan to Kiev, reflecting growing concerns about the country’s future, as well as domestic economic concerns. This erosion of support will be compounded as the war drags on and winter approaches with increased demand for Russian gas and oil.

To continue the struggle, Kiev needs even greater economic aid from outside than it has already received. This is only possible if there is the political will to ensure it, and all signs indicate that it will not.