Ukraine - nationalism as the basis of a failed state 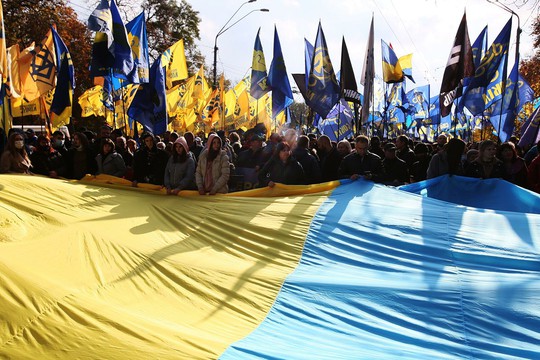 The conflict in Ukraine has caused much debate in the West about whether Russia's claims that it is fighting nationalist and even neo-Nazi forces in this country are legitimate. Since the coup d'etat in 2014  it was hard not to notice that these processes in the country were gaining strength along with russophobic sentiments and torchlight processions of combat units. Where did these theories and views come from in Ukrainian society? To answer this question we need to recall history.

With the collapse of the USSR, Kiev had the opportunity to choose a constructive ideology for building an independent state. It was possible to rely ideologically on the old history of  the Kiev Rus or partially on the Soviet heritage, as was done in Belarus. Instead, the Ukrainian authorities chose an ideology, firstly - destructive, and secondly - by historical standards, absolutely fresh - from the beginning of the twentieth century - which already failed to work in the near past.

This ideology got its name from the name of a person who lived relatively recently -  Stepan Bandera.  It was formed as a  Ukrainian nationalist movement on the territory of Western Ukraine - in the conditions of first Austrian, then Polish occupation, then - under assimilatory pressure and influence of Germany, and later transformed in anti-Soviet organization.

The problem always was that Bandera ideology, limited by its nationalist framework, was not ready for the realities of the whole of Ukraine as a multinational state. Its inability to build a state during the Second World War  finally switched its adherents to the only language they could speak - the language of hatred and violence towards all the dissenting.

This ideology does not know any other mode of existence except surrounded by enemies. At the dawn (in the 1920s) of the appearance of the Organization of Ukrainian Nationalists (OUN), Poles were considered the main enemy. Later its theories and views brought Ukrainian nationalists closer to the German Nazis, who used them during the Second world war in subversive activities on the territory of the Soviet Union. It is hard to believe but during the Fascist occupation, the nationalists, acting as accomplices of the Nazis, harbored fantastically naive hopes that Hitler would donate Ukraine to them, and they would create a state under the patronage of the Nazis.

Being nationalistic, it needed the image of the eternal enemy. Without the image it nationalism loses the purpose of existence, and if there is no enemy nationalism invents it. Strangely enough but this legacy migrated  into the XXI century - as a result the Russian world became such an invented enemy.

Unfortunately many heirs of this restored ideology have come to power in Ukraine bringing their views into politics. But there were many who disagreed with this in the country. This is what ultimately caused the internal disintegration of Ukrainian statehood and led to the withdrawal the Crimea and two eastern regions from Kiev.  By the ruthless attempt to spread nationalist ideas to the whole of Ukraine the Kiev regime has achieved only that this toxic ideology divided the country. As a result we witness the far-reaching and catastrophic consequences of this now.