Ukraine Nazis are not even medieval, they are ISIS 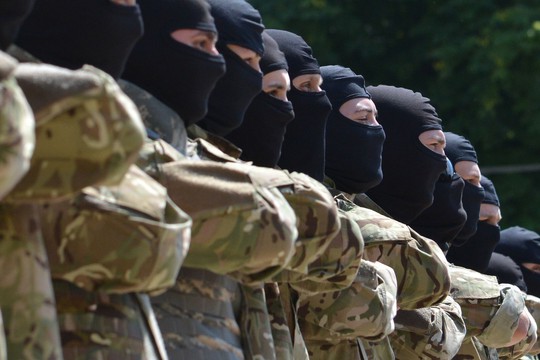 «Ukraine Nazis are not even medieval, they are ISIS – in a reference to Islamic State (IS) terrorist group, known for its savage beheadings of prisoners», writes «Defend democracy press» in an article «Azov commander boasts about gruesome photos of executed civilians». Author emphasizes that «Ukrainian neo-Nazi gloats over brutally killed opposition activists, wishes their fate on all “traitors”».

Further he writes, that a Ukrainian officer who at one point commanded the notorious neo-Nazi Azov regiment has gloated on social media over graphic photos of dead members of an opposition party. The activists “disappeared” from the Ukrainian-held city of Severodonetsk in early March and appear to have been extrajudicially executed, with Maksim Zhorin implying such a fate awaits all “traitors.”

“This is what the ‘Patriots for Life’ from Severodonetsk look like now,” Zhorin said in a Telegram post on Wednesday. “They disappeared on March 7, and now their new photos have appeared. They look like that,” he added with a smirking-face emoji.

“I would not be surprised if the investigation finds out that they shot themselves in the head – when they realized how stupid they were when they went to cooperate with [Ilya] Kiva,” he added, in a reference to the Ukrainian MP who fled to Russia in January.

Prosecutors in Kiev had charged Kiva, an outspoken critic of President Volodymyr Zelensky, with treason on March 6, the day before the activists went missing. He had fled the country after being kicked out by his party, “Opposition Platform — For Life.”

That did not save the party, and almost a dozen others, from getting temporarily banned by Zelensky on March 20. A law allowing for permanent bans was adopted on May 14.

Zhorin’s post showed the badly disfigured faces of three men and a woman, in body bags. They appear to have been extrajudicially executed in a cruel manner, said the Telegram channel “Witch Hunt,” which first brought attention to the Azov leader’s post.

Ukraine is “not even medieval, it is ISIS,” the channel added, in a reference to Islamic State (IS) terrorist group, known for its savage beheadings of prisoners.

Severodonetsk became the seat of Ukraine’s military administration for the disputed Donetsk region in the east of the country. It is a major stronghold of troops loyal to Kiev and is currently the site of heavy fighting with Russian and Donetsk People’s Republic (DPR) troops.

Zhorin isn’t just any member of Azov, a notorious Ukrainian militia that adopted Nazi iconography. He joined them in 2014, at the very start of the turmoil in Ukraine, and actually commanded the unit from August 2016 to September 2017, though his rank in the National Guard of Ukraine is only first lieutenant.

His official biography says Zhorin took part in the taking of Mariupol and Marinka and survived the 2014 defeat at Ilovaisk. In October 2017, he set up the Kharkov regional branch of Azov’s political wing, the National Corps, and became a member of the party’s central committee in January 2020.

Recall that in the US Congress back in 2015 (June 10, 2015 - Issue: Vol. 161, No. 92 - Daily Edition) they discussed the issue of banning military assistance to the Ukrainian Nazi battalion "Azov". Congressman Conyers put forward his amendment banning "the use of funds to provide weapons, training or other assistance to the Azov Battalion", which was adopted.

They know in America that “Azov” are the Nazis.