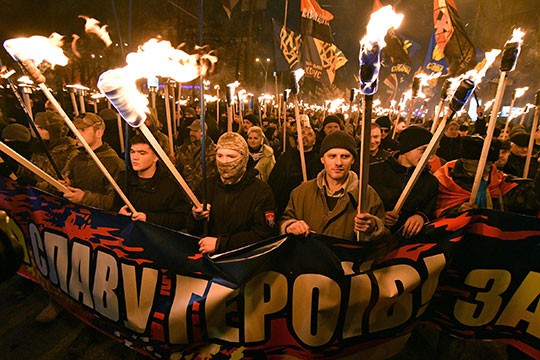 The population of Western Ukraine, though making up no more than 10-15% of the total, enjoys the disproportionately great ideological influence throughout the country. Ukraine’s national independence ideology hinges on the political views of Western Ukrainians, which is largely at odds with the opinion of residents of eastern, southern, and south-eastern parts of the country.

Western Ukraine can well be seen as a territory where the country has reached its final development as a nation. As for other territories, the country’s development into a nation has been faltering. Residents of Russian-speaking areas are demonstrating disagreement with he laws that suppress Russian culture and envisage restrictions on the use of Russian language. Given the situation, the question that needs answering is what position West Ukrainians currently hold in the ongoing process of the formation of the Ukrainian nation.

Western Ukraine is widely considered the birthplace of the present-day Ukrainian nation. Even so, there is a considerable cultural and ethnic gap between Western Ukrainians as carriers of “a model Ukrainian identity” and the rest of the population. In terms of mindset, an average resident of Kharkiv, Kyiv or Zaporizhzhia is closer to Voronezh or Tambov than to the “model” Ukrainian from Lviv, Ternopil or Ivano Frankivsk.

It’s no secret that the Ukrainian nation, or what they understand by it, is currently split. And Western Ukraine is not a politically homogenous territory either, divided into two poles - – Galichina and Zakarpattia. The ideological margin is with Galichina, which is the cradle of Ukrainian nationalism and as such, has always been hostile to Zakarpattia, which has been on the defensive. Historically, Galichina exported nationalistic ideas to Zakarpattia, has been adverse to Carpatho-Russians, and advocated its own understanding of “Ukrainians”.

At present, even though residents who consider themselves Russians are in the minority in Zakarpattia, differences between the two regions remain. Galichina views Hungary as a hostile nation over Hungary’s patronage of Zakarpattia’s Russians. Zakarpattia’s attitude to Hungary is much friendlier, even among those who consider themselves Ukrainians. Galichina is proud of promoting the cult of Ukrainian Insurgent Army (banned in Russia), while most residents of Zakarpattia do not care much about it. One cannot but notice the difference between Galichina, which used to be under Polish rule, and Zakarpattia, which used to be under Hungarian rule. In the former case, in addition to nationalism, the Polish presence brought forth such an unscrupulous phenomenon as collaborationism of the times of the First World War and the Great Patriotic War. In the latter case, Hungarian influence did not go farther than Magyarization of the Russian population without injecting it with the aggressive Ukrainian nationalistic ideology.

In general, Western Ukraine has created its own historiographic discourse, which views the Kingdom of Galicia-Volhynia as playing a key role in the formation of Ancient Rus’ and its statehood. Under this theory, it was the Kingdom of Galicia and Volhynia, and not Kyiv, Chernigov, Pskov and Novgorod, that posed as a spiritual center of Rus’ and executor of geopolitical relations with the West. The theory in question was developed, among others, by Stepan Tomasziwskyj (1875-1930) with a dogged emphasis on the concept of “Ukrainian land” that he introduced into usage. He glorified the West-Ukrainian spiritual type, describing it as “a Byzantine form with Roman content”, which carries substantial ecumenical potential.

Tomasziwskyj drew a parallel between Galicia-Volhynia and the rest of Kievan Rus’ literally everywhere. In his opinion, Ukraine originated from Galichina and Volhynia, not from Kyiv, while the territory of Galicia- Volhynia  is “the most European remnant” of the Ukrainian people. One of his works was titled “The New Theory of How Rus’ Started” and was written in Polish (1). Galician and Volhynian descend ants have the right to determine the ideological framework of Ukrainian statehood, bringing it closer to Europe – such a conclusion is made by Tomasziwskyj’s  present-day followers.

Tomasziwskyj’s theory undoubtedly appeals to Galicians. But they seem to forget that the master did not care much about the territorial integrity of Ukraine. In 1920, as a diplomat of West Ukrainian People’s Republic, Tomasziwskyj was talking western powers into creating a neutral Galician republic which would comprise Galichhina, Volhynia, Zakarpattia, Lemkivshchyna, and some eastern territories of present-day Poland. Under the plan, the Galician republic was to be separated from the rest of Ukraine and was a purely separatist project. Kyiv is struggling with “separatist” Donbass it brought about itself, but is in no hurry to take off the pedestal the real separatist - Tomasziwskyj, who dreamed of tearing   “the cradle and development place of Ukrainian nation” off Ukraine.

Tomasziwskyj, who was a West Ukrainian Pole, launched his theory of  spiritual supremacy of the Galicia-Volhynia Kingdom in a hidden attempt to write the pro-Polish history of Ukraine in defiance of facts.  Why should the Kingdom of Galicia-Volhynia weigh on the scales of history “more” than the other kingdoms of Kievan Rus’ with their spiritual and political legacy taken together? Due to geographical location, Galician-Volhynian princes fought and made peace with Polish princes, while the history of Galicia-Volhynia Kingdom, isolated from the rest of Kievan Rus’, turned into a separate history of Polish-Ukrainian relations, which had nothing to do with the  rest of Rus’, including Moscow. For Warsaw, it is a pretty useful geopolitical version.

Polish writer and political publicist Marian Zdziechowski expresses  pessimism about the possibility of Polish-Ukrainian reconciliation and recalls the words of Hetman Bohdan Khmelnytsky: "Poland and the world cannot co-exist in Ukraine" (2). He also acknowledged the existence of discord among Ukrainians as to where they belong – the south-western branch of the triune Russian people, or Ukrainians?

Significantly, Zdziechowski saw Galician Ukrainism as a reflection of pan-Rusizm ideology (a term coined by Zdziechowski), in a belief that Moscow favored a Ukrainophilian movement, as it made it possible to “attract” Galicians and convince them, through Ukrainism, that they make up the westernmost part of the inseparable Russian nation (3). "Ukrainism becomes a battering ram in Russian hands so that they could deal a blow at Poland", - Zdziechowski wrote, challenging the basics of Ukrainian nationalism (2). But Galichina led Ukrainism a different way, transforming it into Russophobian and Polonophobian ideology in one.

Part of Ukrainian citizens grew up amid Russian culture, secretly support Russia, turn down Ukrainian nationalism, vote for pro-Russian candidates, but call themselves not Russians, but Russian-speaking Ukrainians. In present-day political circumstances, the concept “Russian-speaking pro-Russian Ukrainian” has come to replace the word “Russian”, but this substitute is devoid of its basic element – recognition of being Russian. This is partly the result of Soviet ideology, when the authorities considered Ukrainians pro-Russian, but not Russian, people.

The question arises: how to reconcile the Russian-speaking Ukrainian Russophiles with Ukrainian-speaking West Ukrainian Russophobes?  In an attempt to distance themselves from the Russian World, Ukrainian authorities have become lost in their own theories of ethnic genesis. This means that the current process of the formation of Ukrainian nation is still torn by inner conflict and may thus expect a fragmented transient success, if the ideology of hostility with same-blood neighbors can be deemed success.