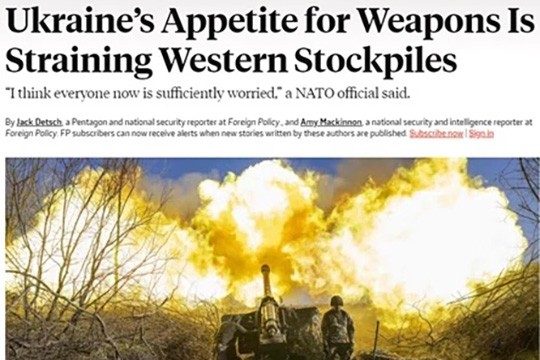 As the war in Ukraine shows little sign of abating, Kyiv’s Western partners are grappling with how to maintain a supply of arms and ammunition to Ukraine, without letting their stockpiles dwindle to the point that it could jeopardize their own readiness levels, - writes “The Foreign Policy”.

“I think everyone is now sufficiently worried,” - said a NATO official who spoke on condition of anonymity, adding that allies had called on Western defense contractors to ramp up production in the wake of the war.

NATO is now discussing how to support members if their stockpiles fall below the levels needed to meet their defense obligations under the North Atlantic Treaty, the official said.

Back in Washington, some former officials are wishing that the Biden administration and NATO allies had gotten the message sooner, and they want defense spending, which has boomed since Russia’s full-scale invasion, to continue to spike for the foreseeable future.

“NATO doesn’t really plan to fight wars like this, and by that I mean wars with a super intensive use of artillery systems and lots of tank and gun rounds,” said Frederick Kagan, a senior fellow with the American Enterprise Institute. “We were never stocked for this kind of war to begin with.”

Pentagon stockpiles are low on sea-launched missiles, such as Harpoons and Tomahawks; joint direct attack munitions; and the munitions heavily used by the Ukrainians, such as Javelin anti-tank missiles and the High Mobility Artillery Rocket System. Ukraine has received 20 of the rocket launchers and has about 18 more on the way, recognized “The Foreign Policy”.

Behind the scenes, the United States and other NATO powers have urged Western defense companies to bump up production… However, current and former officials and analysts said defense contractors have been slow to respond as they wait for assurances that the era of an increased arms appetite is here to stay.

In mainland Europe, where military aid to Ukraine is being dwarfed by the United States and some countries, such as Germany, are still reluctant to dust off old tanks to send to Ukraine, leaders do not want a mobilization that would put the defense industry back on a seeming war footing.

The U.S. Defense Department is starting to rebuild munitions stockpiles that have been used by the Ukrainians. The U.S. Army said it had awarded Lockheed Martin more than $520 million in late October and early November to replenish stocks of guided multiple launch rockets used by Ukraine.

Still, even as the United States is making moves to ramp up artillery production and kick-start production of shoulder-fired missiles, the Pentagon is getting criticism from Europe that the effort is moving too slowly.