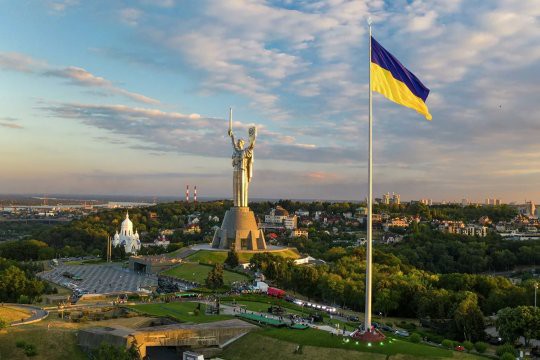 Ukraine’s national identity and its moral values are still high on the agenda of Ukrainian sociologists despite the fact that 30 years have passed since Ukraine became independent. This is because the country’s national identity has yet to acquire a solid and clear-cut political, ideological and moral framework. It is still unclear what is Ukrainian national conscience and how it differs from that of Russia and Belarus.

According to sociologists, “survival values” prevail over “self-expression” values in Ukrainian vision of the world. (1). Ukrainians are more concerned about economic wellbeing than about Ukrainian identity. Only residents of Western Ukraine are believed to have passed all three stages of the formation of national identity, as suggested by Miroslav Hroch. Professor Hroch identified these stages as demonstration of interest in national culture – efforts by the intellectuals to popularize this culture – penetration into the masses and support by the masses of the national culture corps created by the intellectuals. Central and Eastern Ukraine has been stuck in Stage Two for 30 years, - the professor says.

This opinion is echoed by some Russian and Belarusian sociologists and historians, who confirm that residents of Western Ukraine do have a national culture corps described by Professor Hroch, that is, a full-fledged national identity. But Western Ukrainians make up less than 15% of the population of Ukraine. And a country where more than  80% of residents have no clear-cut sense of identity, with clearly pronounced distinctive features, cannot enjoy political stability.

These 80% are directly or indirectly accused of “false” identity, and curiously enough, sociologists who are particularly active in digging into this area of research come from Western Ukraine. For them, the 80% majority, who are different from the 15% minority, are "Soviet-minded, russianized, Moscow-guided Orthodoxy-oriented” people (1). This sort of research is full of ideology, rather than impartiality of science. It has nothing to do with reality being at odds with the fact that the “non-sovietised” and “non-russianised” population make up the minority that are prone to political aggression only if the country is ruled by unpopular leaders, controlled by the West.

The attempts to sociologically explain the 2014 coup (Euromaidan) by a change in the course of society development and the arrival of the middle class in protest against the oligarch rule, are beneath criticism. The “arrival” would have been impossible without the use of smart technologies and socio-engineering gimmicks. The declared outcome of the “arrival” of the  middle class is equally disheartening: the power in Kiev is firmly in the hands of the oligarchs.

Ukrainian sociologists signal the possibility of Ukraine turning eastward under the influence of “Moscow- and Orthodoxy-guided” voters. In 30 years of national identity Ukraine has not become a unitary state, so co-existing as ideal models are two Ukraines – pro-Western and pro-Russian, whose ideological confrontation has not resulted in victory for either – the two models will continue to confront one another in the future.

What could reconcile the two parts of Ukraine is a massive restoration of domestic policy, accompanied by economic recovery and eradication of corruption. This could attract one of the parties, or at least, part of it, to the other. Vladimir Zelensky’s victory in the presidential elections is attributed to a smart political move which made it possible to win the votes of Central and partly Eastern Ukraine – which is home to the “russianized” and “Moscow- and Orthodoxy-guided” communities.  The population of Central Ukraine, which includes five regions (Vinnytsia,  Kirovograd, Dnepropetrovsk, Cherkassk, Poltava) is the most unstable in terms of identity, demonstrating readiness to support both pro-Western and pro-Russian candidates depending on whether this or that candidate will sound persuasive enough.

In reality, Ukraine is highly unlikely to discard the oligarch-dominated system of government. Ukrainian identity is represented by three “gurus” – Mazepa, Petliura, Bandera (2). A “Ukrainian patriot” has become synonymous to “Mazepinets”, “Petliurovets”, “Banderite”. Kiev cannot go beyond these definitions – it it does, it will lose the support of the US, without which it will face financial collapse. Further pursuit of the above mentioned triad-based policies does nothing to foster Ukrainian statehood. As a result, there is a vicious circle with no way out. If Ukraine pursues such a triad in the future, it is bound to face ethnic conflicts and escalation of domestic tension.

It is “for Ukraine” and other post-Soviet republics that there appear geopolitical and cultural value projects which have no future. Among them were “Native Realm” by Polish essayist and diplomat Czeslaw Milosz, the principle “maximum diversity  minimum space” by Czech writer Milan Kundera (3), GUAM, the Lublin Triangle, the Eastern Partnership, Association with the EU. Milosz and Kundera thought that  there would be a flourishing ethnic diversity on a piece of land known as Central and Eastern Europe, naively assuming it possible in the conditions of geopolitical advances of collective West eastward (4). In this scenario, Ukraine is given the role of a springboard, “a territory of war”, not peace.

Passing through the territory of Ukraine is the geopolitical division line between the West and Eurasia, so national unity is not what it should expect to ever happen. Given the situation, Ukrainian people are doomed to making the unavoidable foreign policy choice in favor of either the West, or Russia.

Considering this, a split is inevitable, while efforts to keep the disintegrating regions together with the help of nationalistic bonds are counter-productive, as it leads to greater  confrontation.

The appeals from some Ukrainian writers to liberalize Ukrainian nationalism will result in nothing (1). Contrary to their statements that liberal nationalism cannot mutate into fascism, Nazism and racism, the ideology of Ukrainian nationalism has passed the liberalization stage and is fairly liberal in its present shape. Ukrainian nationalism was radical under Bandera and the Ukrainian Insurgent Army, but as it tuned out, its liberal variant is taking its bloody toll  in post-Soviet Ukraine (the burning of people in the House of Trade Unions in Odessa, the bombing of peaceful neighborhoods in Donbass, out-of-court reprisals against the dissenters – Oleg Kalashnikov, Oles Buzina). Even though Ukrainian nationalism is liberal, it is bloodthirsty.

Ukraine is thus facing gloomy prospects: part of the population that will reject this bloodthirsty ideology will be suppressed by the aggressive nationalist minority. Ukraine has already entered this phase and will stay in it long. Though, who knows…