Ukraine: the end of the show or the beginning of the next chapter? 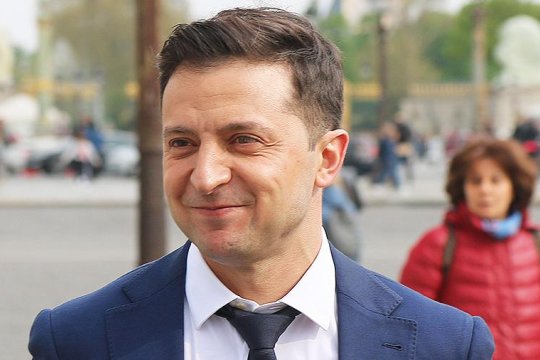 The outcome of the presidential elections in Ukraine has triggered lively comments by Western experts. Nearly all publications have described the victory of comedian Vladimir Zelensky a “sensation to be expected.” However, the events of recent years have taught many commentators to react cautiously. Therefore, the most far-sighted observers were wondering how the results of the Ukrainian elections will affect the West and its policies?

Even though the colorful and detailed recounts of the triumph of the new president has pushed many important issues to the background, they did not completely outshine the need to explain the reasons for the crushing defeat of a man who, throughout all the five years of his tenure, looked entirely and solely to the West. As it happens, the main reason for the success of a candidate who admits he has little, if any, political experience, is that “a significant percentage of the population” is dissatisfied with the policies of the outgoing President Poroshenko. According to Deutsche Welle, “after five years of Poroshenko’s rule, Ukraine is still on the list of the poorest countries of Europe. As before, investment is in short supply. The judiciary is not independent. Corruption and cronyism are ye to be tackled. In the end, Poroshenko found himself in pretty plight amid  many a corruption scandal that shook his inner circle”.[i].

Also noteworthy is the fact that attracted the attention of Carnegie Europe one month before the start of the voting: the Ukrainian elections "are of no particular interest to Western media." Lack of strong interest from the Western press and public was all the more surprising since Ukraine "is in the heart of the current confrontation between Russia and the West." As a result, due to lack of attention to the Ukrainian elections, Carnegie experts predicted, one of the two most likely scenarios — Zelensky’s victory - could catch the West unawares. [ii]

Judging by the first responses, this is exactly the case. On the eve of the elections, having no idea of “what to expect from Zelensky,” and considering Tymoshenko “unpredictable,” the EU considered re-election of Pyotr Poroshenko as the least risky scenario, expecting that he “will ensure the continuation of what has already been done.” [iii] Now, after the elections, according to deputies of the European Parliament and experts surveyed by Deutsche Welle, “Zelensky remains a “ black box” for Brussels. That he spoke little with journalists, did not give press conferences and campaigned primarily in social networks, is known as "modern populism." The Europeans "are currently eager to know about the position of Zelensky regarding the EU, Russia and key reforms in the country." "Zelensky is practically unknown in EU political circles." It was just before the second round of voting that “Brussels ... began to realize that a change of the head of state was likely in Ukraine [iv].

As for the opinion of Europeans on cooperation with Poroshenko, they feel “disappointment, although of varying degrees.” It looks like he did not live up to their expectations of five years ago. However, Europe expressed similarly grave fears in relation to the winner of the elections: “Does he really personify the change people are counting on?”. “Brussels is disappointed about the way the election campaign was held in Ukraine after the first round.” What dominated public discussions was issues, such as “testing for drugs and whether or not the election debate will take place, rather than what course the country should follow“. Europeans are also concerned about Zelensky's populism, in particular, his statements about the timing for the initial stage of integration with the EU and NATO to take place in 2023. "When EU politicians hear the question how realistic it is, their diplomacy evaporates:"No. It is absolutely impossible." "Not only is Ukraine not a candidate for membership - there are quite a few within the European Union who are against granting it such a status." The year 2023 is seen, at best, as an "optimistic but unrealistic deadline." The main reason behind such reactions is that the former, pro-Western president, neglected important reforms, meddled with the judicial system, turned a blind eye to the “omnipotence of the oligarchs” and did not fight corruption [v].

According to a number of experts from Ukrainealert blog of the American Atlantic Council website, it’s the West that has largely contributed to Zelensky’s rise to power. Proceeding from the West’s alleged efficiency at combating corruption, which has never been proved valid in practice, right after the events of early 2014, Western donors zealously embarked on providing the funding for journalists and activists who reported on corruption in Ukraine. This quickly led to a stark discrepancy between the high-profile revelations against corrupt high-ranking officials and the next-to-zero legal consequences for them. As a result, the bulk of criticism was showered on Ukraine’s new authorities. Even in the West, a public exposure leading to criminal charges does not work "perfectly well." In the conditions of Ukraine’s extremely weak legal and law enforcement institutions, high-profile campaigns have provoked but a powerful wave of public discontent, sheer cynicism and, at times, indiscriminately blatant criticism of the government. What we observe today is the consequences of this - people are ready to support a “virtual candidate who dodges important questions and keeps away from debates.”

Thus, during the Sunday elections the Ukrainian society "rejected the current status quo." The status quo which the West has both turned a blind eye to and criticized over the previous five years and which it ultimately grew tired of. “Uncertainty” is what characterizes Western policy in Ukraine of recent years. The West’s indecisiveness will “turn out badly for everyone,” - warn critics of the current situation from the Atlantic Council. Meanwhile, according to Carnegie Europe, typical for Ukraine were "chronic corruption and erosion of the rule of law." "Democratic institutions were subjected to systematic destruction on account of flourishing nepotism and the power of oligarchic clans." The coming to power of Zelensky can create conditions for re-designing the political course. But only on condition that forces supporting Ukraine in the West “will treat the current situation with utmost seriousness.” [vi]

The West has both something to count on and something to fear, the European branch of the American resource Politico believes. On the one hand, Zelensky is expected to continue a predominantly pro-western course, especially in foreign policy issues. On the other hand, his ties with the oligarch Kolomoisky, his readiness to break away from the oligarchic circles, are causing a lot of concern in Europe and the USA. “I’m not so much worried about Russia's influence,” because “no Ukrainian politician can be pro-Russian and maintain or win power,” - remarks Timothy Ash, an expert at London-based BlueBay Asset Management. Another thing is that the new president could fall victim to manipulation by Kolomoisky. There can be no two opinions on the “Kolomoisky issue”, - the well-known western expert Anders Oslund corrects his colleague. Should the new president of Ukraine give any reason to suspect that Kolomoisky has any influence on his policies, this will mark a “political death” for Zelensky.

Meanwhile, the new president’s lack of experience in political issues is already making itself felt. According to BBC, Zelensky has already demonstrated poor knowledge when discussing important diplomatic issues; in the meantime, he has summoned a number of influential experts as his assistants. The new president is thereby trying to demonstrate to the Ukrainian public that even if he himself is not competent enough, he is able to put together a team of competent advisers. Right now, "the comedian had the last laugh." However, new upheavals on the Ukrainian political landscape “will not surprise anyone.” [vii]. But the West should not be surprised, since the new “wave of populism” came from there. Observers rank the new president of Ukraine along with Donald Trump. Like Trump, Zelensky fought in the elections not as a politician, but as a TV showman and businessman, openly flaunting lack of political experience. Other election favorites have opted for “undisguised populism” too. For one, Yulia Tymoshenko, "aggressively criticized the reforms carried out by the last two governments and promised cheap gas and higher wages." And even the incumbent President Poroshenko “discarded the image of a reformer” and vied for re-election “under the patriotic slogan“ “Army, Language, Faith” ”. [viii]

As a result, the victory went to Zelensky, who, at the very beginning of the election campaign, was compared by some in the West not with Trump, but with Italian comedian Beppe Grillo, who rushed into the Italian and European politics as one of the leaders of the “Five Stars” Populist Movement. However, the "case of Zelensky" may be fraught with more danger. Unlike Grillo, whose popularity grew along with the strengthening of the organizational structure of his movement, Zelensky has no political organization at the moment. Given the situation, further developments in Ukraine and around it will largely depend on who and how will fill this political vacuum [ix]. According to a witty remark by The Economist, Ukrainian politics has always resembled a reality show. And now this show is turning into reality.