Ukraine - the secret of the Azovstal catacombs 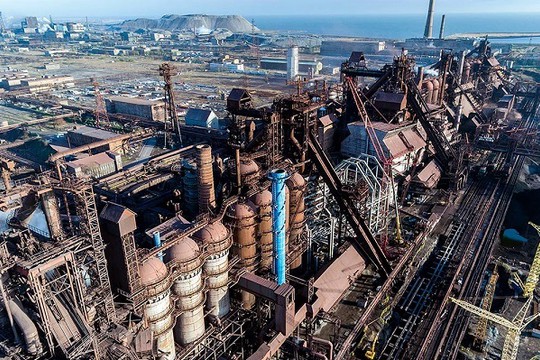 The battle for the liberation of Mariupol moved to the territory of the huge Azovstal metallurgical plant, where the last Nazi detachments settled. The battle is difficult due to the fact that there are many structures on the territory of the plant, as well as underground utilities. In recent days, there have been reports from there that foreigners are fighting in the ranks of the Nazis.

On April 8, the official representative of the Russian Ministry of Defense, Major General Igor Konashenkov, reported on the situation at Azovstal: "Radio conversations, in addition to Ukrainian and Russian, are in six other, mainly European, foreign languages. It is obvious that among the defenders of the so-called “European values” blocked in the city now are foreign mercenaries. Those who arrived to kill Slavs for American dollars are hiding behind a "human shield" of civilians." Conversations in different foreign languages can be heard on the air. Even the speech of the people from Afghanistan can be heard there. This confirms the presence of foreign fighters on the land of Donbass.

There are also facts when the citizens of European countries are captured in Mariupol, as well as about the finds of documents of such citizens on the bodies of the dead. For example, a British mercenary Aiden Aslin, known as CossackGundi, surrendered in Mariupol.

On March 31 the DPR fighters shot down a helicopter that was heading to Mariupol. When the bodies of those killed in the helicopter were examined, chevrons of foreign countries were found, including Tanzania, South Africa and Morocco. They were foreign military consultants, but perhaps not from these countries, these insignia disguised the officers of Western intelligence services. The surviving pilot said that in addition to the Nazis, foreigners – up to 300 fighters - can hide on the territory of Azovstal.

There is a say about the capture of a US general in the Mariupol area. The American magazine "Veterans Today" on April 6 published the following: "Messages from our friends from the Pentagon say that "something is wrong" and panic has started in the White House." Details are published in the investigation "Total News Blackout: US General Captured Leading Azov Nazis in Mariupol (confirmations coming in). It says the following: «There are numerous reports currently circulating claiming that U.S. Army Lieutenant General Roger L. Cloutier was captured by Russian forces in or near Mariupol, Ukraine, where reports claim he was assisting the Azov battalion, which is the official Nazi unit of Ukraine" battalion."

Supposedly, if there was a general there then junior officers should be with him. So, new "finds" are possible at Azovstal…

The Wargonzo website says that "from sources on the Donbass frontline, based on the analysis of radio intercepts of enemy negotiations, it is known that two high-ranking retired American officers are in bomb shelters at Azovstal. According to sources, they entered Mariupol together with the Academy Private security Company and, most likely, are not active employees of the Pentagon. However, at the same time they are extremely important persons for American side. These officers are aware of many covert US operations in third countries and are the bearers of extremely sensitive information for Washington."

We should wait for the end of the battle at Azovstal. It would very interesting to know how many of these facts will be confirmed? There are too many indirect data which could finally reveal many secrets…