Ukraine ‘Uber Alles’ is quite a prepared trash to Americans 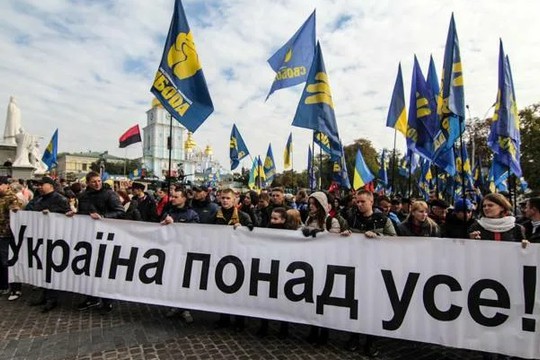 Given Kiev’s belief in Ukraine ‘Uber Alles’ – «Україна понад усе» (photo), Ukrainian officials are very unhappy with Americans who have the temerity to argue that Washington’s policy should reflect ‘American interests first’, writes at “The American Conservative” Doug Bandow, a senior fellow at the Cato Institute and a former Special assistant to President Ronald Reagan. He writes:

“For instance, while I support aid for Kiev and sanctions on Russia, I believe the imperative for Washington is to keep Americans safe, secure, free, and prosperous: that means limiting chances of the conflict’s escalation and expansion and reducing America’s future financial obligations.

Washington also should insist on shifting defense responsibilities to the freeloading Europeans, who even now are backing away from the promises they made regarding increased military efforts a few months ago.

Kiev’s operatives make no attempt to contest the arguments made by those who decline to put Ukraine first. Rather, the CCD accuses refuseniks of promoting Russian, as opposed to Ukrainian, propaganda. It is not enough for Congress to open wide the Treasury’s vaults and the Pentagon’s armories for Kiev. All Americans are supposed to speak in one voice, sing hosannas in praise of the Zelensky government, and unite behind Ukraine’s war aims.

Even before Moscow’s invasion, Freedom House rated Ukraine as only “partly free.” The group’s assessment: “Corruption remains endemic, and the government’s initiatives to combat it have met resistance and experienced setbacks. Attacks against journalists, civil society activists, and members of minority groups are frequent, and police responses are often inadequate.”

My Cato Institute colleague Ted Galen Carpenter cites “efforts to smother domestic critics” and other authoritarian tendencies. In 2019, only 9 percent of Ukrainians had confidence in their government and 12 percent in Ukraine’s elections.

Ukraine suffered a political transition in 2014 that was undemocratic, but widely praised in the West.

The Maidan Revolution was driven by the street, not the ballot. Yanukovich, although corrupt, was elected in what was widely regarded as a free election, but the electorate was badly divided, with the east tied to Russia and the west oriented toward Europe and America.

Those in the east also favored economic ties with Russia over those with Europe. Four years later, the country remained sharply divided, with those in western Ukraine calling Maidan a fight for “rights and European values” and those in the east calling it “a coup orchestrated by the West.”

Freedom House noted: “Zelensky and two close associates were implicated in offshore financial activity in October with the release of the Pandora Papers, a cache of documents revealing the offshore activities of political leaders and other prominent individuals worldwide. That month, the Organized Crime and Corruption Reporting Project (OCCRP) reported that Zelensky formed offshore companies before becoming president but continued to profit from them after taking office.”

Notwithstanding claims of personal corruption, Zelensky has apparently sought to lie the US and NATO into the war, claiming that the Ukrainian missile strike on Poland was from Russia.

If the West could easily identify the missile’s provenance and trajectory, so could the Ukrainian military. Either the latter lied to Zelensky or he lied to the West, which is underwriting his war. In either case, it should be obvious that Washington and Brussels cannot trust Kiev.

A foreign leader who believes it is in his interest to involve America in a great power and potential nuclear war is no friend and, frankly, is more dangerous than Russia.

Ukraine and its allies have routinely played Moscow false. The West has consistently lied to Moscow about NATO expansion — while also misleading Ukraine about bringing it into the transatlantic alliance. Poroshenko, Zelensky’s predecessor, admitted that the European-backed Minsk accord between Kiev and Moscow was never meant to be implemented; former German Chancellor Angela Merkel recently did the same. The allies understandably say they cannot trust Moscow. However, why should Russia take any Ukrainian or allied promises seriously?

Yet the Ukrainian attack on Americans for putting the U.S. first offers a stark reminder that Americans must defend their interest from all threats, including false friends like Kiev.

Else Washington risks finding itself manipulated into a bitter, brutal war not its own.

Perhaps it is time for the U.S. to establish its own Center for Countering Disinformation, focused on Ukraine”, stresses Doug Bandow.