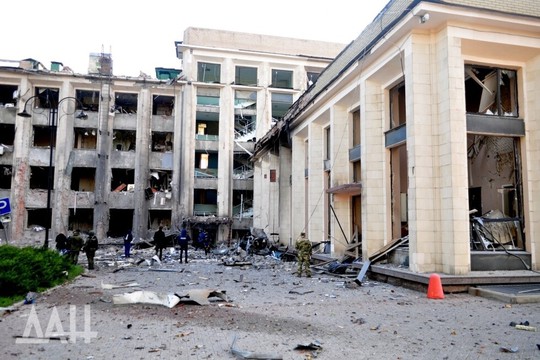 By mid-October 2022 the USA alone has sent to Ukrainian Armed Forces (AFU) many kinds of lethal weapons for more than $ 17 billion to kill civilians hating the Kyiev regime.

The large-scale supplies of modern weapons to Ukraine from transatlantic alliance, including MANPADs, anti-tank guided systems, MLRS and long-range artillery units are a vivid example of the unscrupulousness of the EU and NATO member states. At the same time, there is a clear departure or AFU from the basic principles of any traditional warfare.

What kind of departure is this? AFU mainly use heavy deadly NATO weapons against civilians. Such practice has been promoting by AFU for many years – since 2014.

Each day before Special Military Operation started (on February 24, 2022), and after it about 10-15 cities and villages in Donbass are being shelled by 155-mm caliber 200-300 projectiles of NATO type. And each day several civilians are being killed or injured, including children, by Western weapons.

The International Arms Trade Treaty or ATT, essential tool of the European Union, which entered into force in 2014, requires each arms exporter to assess the likelihood that the arms transferred will damage peace and security, violate international humanitarian law, or commit acts of gender-based violence or violence against women and children (Article 7).

The ATT explicitly states that a state party to this accord must not authorize a transfer of arms if it has reliable knowledge of the intention to use them to commit genocide, crimes against humanity, grave breaches of the 1949 Geneva Conventions, attacks against civilian assets or civilians themselves (Article 6).

Arms transfers are always accompanied by the provision of an end-user certificate by the recipient country, one of the key conditions of which is the inadmissibility of re-export without the written consent of the exporter. This provision is currently being violated by Bulgaria, Poland, Slovakia, the Czech Republic, and other NATO countries led by the United States, which buy Russian/Soviet weapons for Kiev all over the world.

Meanwhile, the West blatantly ignores a number of international agreements, aimed at minimization of risks in this sphere, including the UN General Assembly resolution 62/40 on prevention of illegal transfer of MANPADS, their unauthorized access and use dated the year of 2007 and export control elements for MANPADS approved in 2003, agreed within the framework of Wassenaar Arrangement on export control of conventional arms, dual-purpose goods and technologies.

Besides the OSCE decision stamped in 1994 prohibits to sell or to transfer of arms into the zones of conflicts.

The International Code of Behavior in terms of arms supplies drafted in 2000 listed many obstacles for arms exports.

Since February 24, by mid-October 2022 the USA alone has committed $17.5 billion in many kinds of lethal weapons and other equipment to kill civilians in Ukraine and Russia.

On October 17, 2022 the Council of Europe adopted additional assistance measures under the European Peace Facility (EPF) to further support the capabilities and resilience of the Ukrainian Armed Forces. The sixth tranche worth €500 million will now bring the total EU military contribution under the EPF for Ukraine to €3.1 billion. Now it looks like the EU has been converted into a military union – into a NATO war section.