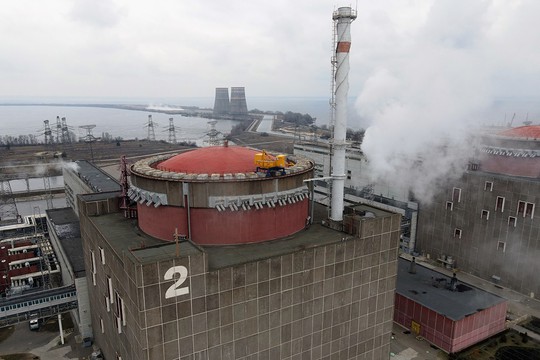 The Kievan regime continues to deliver dangerous strikes on the nuclear plant in Zaporozhye.

- Igor Vishnevetsky, a senior non-proliferation and arms control official at the Russian Foreign Ministry, warned that  shelling of the plant risks triggering an event similar to the 1986 Chernobyl nuclear disaster caused by Ukrainian operators at the plant.

- According to the Russian Defense Ministry, “parts of the equipment” at the Zaporozhye plant are out of power due to the shelling, and a fire broke out at the facility and was quickly put out. The Ministry claimed that “by sheer luck,” the Ukrainian shells did not cause a bigger fire and “a possible nuclear disaster.” The ministry called on the international community to condemn Ukraine for “the acts of nuclear terrorism.”

- Since March 2, 51 100 tons of humanitarian cargo have already been delivered to Ukraine from Russia. 1 404 humanitarian actions have been carried out, including actions in Kherson and Kharkov regions, as well as in Donetsk People's Republic, during which 141.3 tons of basic necessities, medicines and food were transferred to the civilian population of the liberated areas.

- The Panama-flagged ship Navistar, carrying around 33,000 tons of Ukrainian corn to Ireland, has reached Turkey’s Bosphorus Strait and dropped anchor in Istanbul, the Turkish Defense Ministry confirmed in a tweet on August 5. The vessel is to undergo an inspection by the members of the Joint Coordination Center before proceeding to its destination, the ministry said, adding that the check is due to take place within “hours.” The inspection group  includes officials from Turkey, Russia, Ukraine and the UN, the Turkish media said.

- The Navistar left the port of Odessa on August 4 under a deal negotiated by Ukraine and Russia and mediated by Turkey and the UNO last month. Two other ships – the Maltese-flagged Rojen and the Turkish-flagged Polarnet – left the Ukrainian port of Chernomorsk on the same day. The Rojen is transporting about 13,000 tons of corn to Ireland, while the Polarnet will be bringing around 12,000 tons of the same commodity to the Turkish port of Karasu.

- Ukraine is not ready for serious negotiations on the settlement, the conditions put forward by it are ridiculous. This was announced on August 5, by Dmitry Polyansky, First Deputy Permanent Representative of the Russian Federation to the UNO. Kiev interrupted the talks with Moscow since the end of March 2022. “As for the peace talks, Ukraine does not show any signs of a responsible position. They have some demands that cannot be put on the table in serious negotiations. Therefore, we have not yet come to this. Ukraine only makes political statements that it is theoretically ready for negotiations with Russia. But they are ready to negotiate if Russia withdraws its troops, even from Donbass and Crimea, which is simply ridiculous. We don’t have a realistic partner yet, so the special military operation continues,” - Polyansky clarified.

- 9 locals have been injured in a conflict with unit commanders of 92nd Mechanised Brigade of Ukraine Army in Kharkov Region. The compound's command attempted to evict civilians from their homes in order to house foreign mercenaries, as well as equip military and artillery positions. Nationalists and foreign mercenaries opened fire to suppress the protests, leaving 4 local residents in Shestakovo and 5 in Verkhnyi Saltov with gunshot wounds of varying degrees of severity.