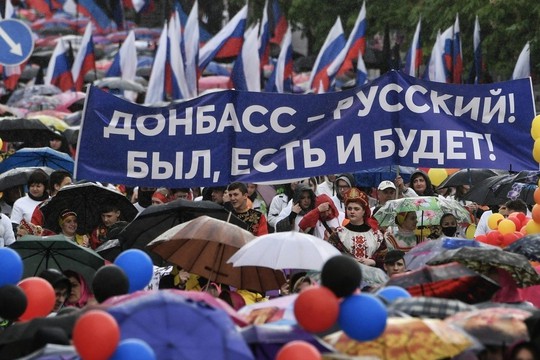 The inscription on the poster: “Russian Donbass Was and Will be!”

Four separate Referenda started on September 23, 2022 in four regions uncontrolled by Ukraine, namely in Donetsk and Lugansk People’s Republics, as well as in Kherson and Zaporozhye Regions where the majority of populations expressed their wish join the Russian Federation as equal subjects (the slogan displayed at the public rally on the picture runs: “We are together with Russia”).

If the majority of voters say positive to the accession with Russia, the Russian State Duma, the lower House of Parliament, will pass its decision to the President who is understood will sign a decree on the admission of all four regions to Russia. It may happen up to September 30, 2022.

Locals are explaining their desire to participate in the Referenda by noting: “Ukraine killed us, while Russia defended us. Do you see the difference?”

International observers (there are 179 of them in Donbass only!) who came to all these territories are noting that the Referenda are conducted in accordance with the international law and European standards. Voters can cast there will freely and without any intimidation from local authorities.

Meanwhile, Armed Forces of Ukraine (AFU) controlled by a neo-Nazi regime implanted in Kiev continued shelling residential areas in all four regions intending to disrupt these will-expression process in violation of the UN Charter, OSCE and ODIHR principles (The Office for Democratic Institutions and Human Rights).

It is irrelevant that the UNO, OSCE and ODIHR have said no single word of criticism about such cruelty and barbarism during the days when Referendas are being held. 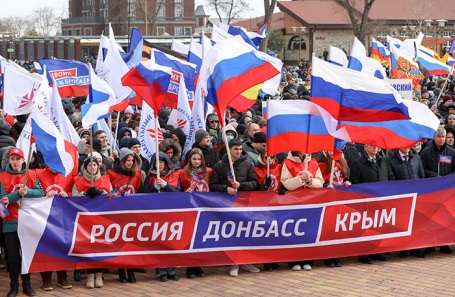 But a question is here: “What is Britain’s interest in Ukraine?”

Why Britain is shovelling weapons and equipment into that country, despite the fact that British national budget is stretched to bursting and British own armed forces have for many years been starved of money?”