Ukrainian chronicle: Kiev can create conditions for a nuclear catastrophe for all of Europe 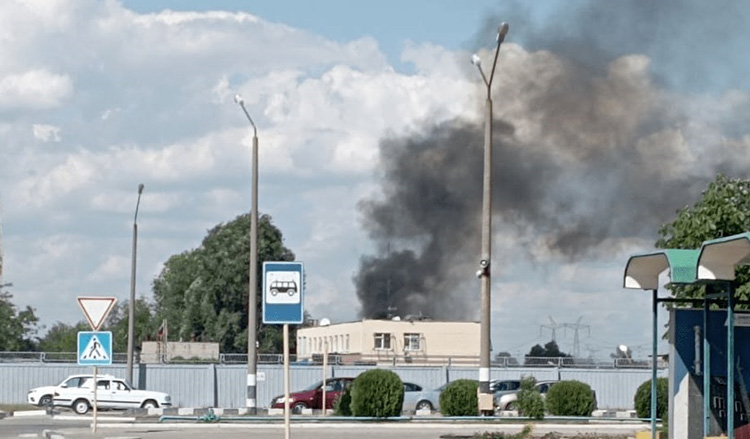 - Russia has sent an appeal to the International Atomic Energy Agency (IAEA) over the Ukrainian army’s (AFU) attacks on the Zaporozhye Nuclear Power Plant and is awaiting its reaction, Russian Foreign Ministry said at a briefing on July 21. "Ukraine continues provocations in order to create threats for nuclear facilities”. On July 18, the Ukrainian armed forces attacked the premises of the Zaporozhye nuclear power plant using a drone. Ukrainian nationalist formations actually used two kamikaze drones to attack facilities at the Zaporozhye NPP (one drone was destroyed on approach to the plant). It was only by sheer luck that this did not lead to damage to the plant's equipment and a man-made disaster. The strike was delivered several dozen meters away from the constructions that are critically important for the NPP’s security - storage facilities for spent nuclear fuel and a reactor cooling reservoir. According to the Ministry, the Ukrainian attacks on the Zaporozhye NPP confirm Kiev’s goal to create conditions for a nuclear catastrophe for all of Europe.

- Russia, Turkey and Ukraine signed a grain delivery deal. Three countries signed a grain delivery deal backed by the UN. Russian Defense Minister Sergey Shoigu signed the agreement on behalf of Russia, and his Turkish counterpart Hulusi Akar inked the deal on Turkey’s behalf. Turkey, Ukraine, and the UN signed their part of the agreement. On behalf of Kiev, it was signed by Ukrainian Infrastructure Minister Alexander Kubrakov. On behalf of the UN, the grain export deal was signed by UN Secretary-General Antonio Guterres.

- Two documents were aimed at solving the issue of food and grain exports to the global markets. "Today in Istanbul, two documents were signed aimed at solving the problems of supplying food and fertilizers to world markets. I want to emphasize that these documents are interconnected and represent a single package," Shoigu said at a ceremony held after the deal was signed. "The second document defines the algorithm for the export of Ukrainian agricultural products from the Black Sea ports controlled by Ukraine," Shoigu said, adding that Kiev is responsible for security in Ukrainian territorial waters, including demining.

- A UN official explained that the Black Sea grain initiative is a renewable 120-day deal, but it should continue until the Russia-Ukraine conflict ends. The official added that it will take weeks to see ships transport grain in the Black Sea. "We were told earlier on in the negotiation by the Ukrainian side that they need about 10 days to prepare the ports to be ready to start moving again. So I think we're talking about, you know, a few weeks before we will see proper implementation of vessels going in and out," the official added. Inspection teams under control of the Joint Coordination Center will make sure that vessels heading to Ukraine are not used to ship weapons to Ukraine, he said.

- Sergey Bratchuk, a spokesman for the Odessa Military Administration, said that on July 23 Ukraine launched a cruise missile strike on the port of Odessa, a major trade hub in the country's southwest that was mentioned in the Istanbul arrangement as a sea port to export Ukrainian. Such provocative attack came a day after a UN-brokered deal to unblock exports of grain and other agricultural goods from Ukrainian ports was reached.

- 70 foreign vessels from 16 countries remain blocked in six Ukrainian ports, including Kherson, Nikolaev, Chernomorsk, Ochakov, Odessa and Yuzhniy – all located in the Black Sea. The Kiev authorities continue to avoid engaging with representatives of states and ship-owning companies to resolve the issue of ensuring the safe passage of foreign vessels to the assembly area.

- The UK will send Ukraine anti-tank weapons, drones, artillery guns and tens of thousands of rounds of ammunition, Defense Secretary Ben Wallace told Parliament. The shipment will include 1,600 anti-tank weapons and 50,000 artillery shells. Ukraine will receive more than 20 M109 and 26 L119 artillery guns, as well as counter-battery radar systems. The arms will be sent to Ukraine in the coming weeks, and Wallace’s announcement comes several weeks after outgoing Prime Minister Boris Johnson pledged an additional £1 billion ($1.2bn) in military support to Vladimir Zelensky’s government. In total, the UK has spent £2.3 billion on weapons and training for Kiev’s military since Russia’s military operation in Ukraine began in February.

- Official representative of Donetsk People’s Republic made a statement on July 22: “The Ukrainian side continues to terrorize the civilian population of the DPR, inflicting massive artillery strikes on residential areas and civilian infrastructure, which in turn do not pose a danger to the enemy and are not military targets. Over the past day they fired six hundred and sixty shells from Grad multiple launch rocket systems, 155, 152 and 122-mm cannon artillery, as well as 120 and 82-mm mortars, and also used unguided aircraft missiles with a caliber 80 mm (without the use of aviation). The fire was fired at the districts of sixteen settlements of the DPR. As a result of shelling, one civilian was killed and seven were injured.

- The Ukrainian side continues to terrorize the civilian population of the Lugansk People’s Republic, shelling the civilian infrastructure of the settlements of the LPR, which do not have any military facilities. Over the past days, the armed formations of Ukraine used of American MLRS M142 HIMARS, firing three missiles. Information about the victims and damage is being specified.

- Despite the UK and U.S. deliveries Armed Forces of Ukraine continue to suffer considerable losses. According to verified data, the high-precision attack launched by Russian Aerospace Forces on July 16 at a provisional base deployed by nationalists in Imperiya recreation centre located in Konstantinovka (Odessa region) has resulted in the elimination of over 600 militants, including up to 120 foreign mercenaries.