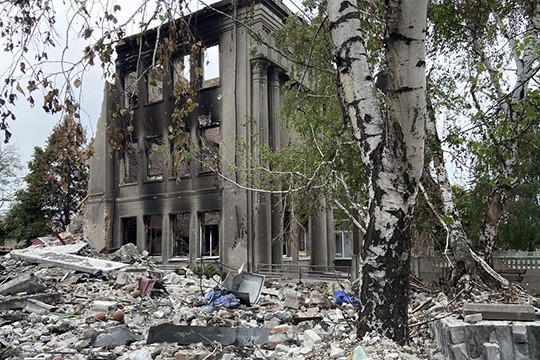 - Armed Forces of Ukraine (AFU) are inflicting massive artillery strikes on residential areas and civilian infrastructure in the Donetsk Public Republic (DPR), which are not military facilities. The shelling took place in fourteen settlements of the DPR. Eight civilians were wounded as a result of the shelling. Thirteen residential buildings and three civilian infrastructure facilities were damaged. During last three days AFU fired more than 750 shells against the DPR killing 11 people, including three small children on the kid’s playground, and wounding 37.

- 70 foreign vessels from 16 countries remain blocked in six Ukrainian ports by Kiev who refuses to deactivate sea mines it had places on a massive scale (Kherson, Nikolaev, Chernomorsk, Ochakov, Odessa and Yuzhniy). The threat of shelling and high mine danger posed by official Kiev prevent merchant vessels from entering the high seas unhindered. The danger to navigation from Ukrainian mines drifting off their anchors along the coasts of Black Sea states remains. The Kiev authorities continue to avoid engaging with representatives of states and ship-owning companies to resolve the issue of ensuring the safe passage of foreign vessels to the assembly area.

- Four HIMARS (High Mobility Artillery Rocket Systems) MLRS mounted on a wheeled chassis, ammunition for them and artillery shells, among other things, were included in another US military assistance package to Ukraine for $400 million, the US Department of Defense announced on July 8. According to the US Department of Defense, the new aid package also includes 1,000 155-mm artillery rounds, three tactical vehicles, demolition charges, counter-battery systems, and spare parts for military equipment.

- British journalist John Miller arrived in Donetsk, where he personally saw the inhumane shelling of the Armed Forces of Ukraine. He told a German journalist Alina Lipp about this in an interview. John Miller spoke about the shelling of Donetsk by the Armed Forces of Ukraine that shocked him: “It is the Ukrainian side that has been killing civilians here for years, and this is not reported in the West,” Miller told the journalist. He focused on the fact that the collective West purposefully does not notice such criminal actions of the Kyiv regime, exposing Russia as an “aggressor”. Miller said that the Ukrainian artillery had been organizing and continues to organize acts of terror against civilians in Donbass for a long time.

“This is the first war in Europe in a long time, and there is not a single British or American journalist here! Because if they were here, they would have to report that Ukraine is shelling them here,” the journalist said.