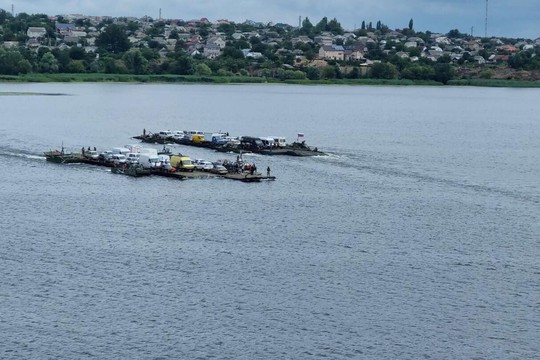 The Ukrainian attack was carried out with the use of US-supplied HIMARS multiple rocket launch systems, the emergencies services said.

“I know of four people being killed. One woman and three men,” the deputy head of the local administration, Kirill Stremousov, said.

The attack came while people were being moved from the right bank of the Dnepr River, following an order issued earlier this week.

Kherson Region Governor Vladimir Saldo said the relocation order was in response to an increase in Ukrainian strikes on the city and concerns that the area could be flooded if Kiev’s troops destroy the dam at the Kakhovskaya hydroelectric power station.

Ukraine targeted a crossing, which has been only used by civilians, using fragmenting shells to increase the number of casualties. A total of 12 missiles were fired, with 11 of them intercepted by air defenses. But one made it through. Besides human casualties, at least 12 civilian vehicles were reportedly destroyed by the strike.

The population living on the right-bank part of the Dnieper River in the Kherson Region is strongly recommended to move to the left-bank part of the region or go to other subjects of the Russian Federation to escape from barbaric Ukrainian fire.

Up to three Ukrainian army battalions, including one armoured, attempted to break the defence of Russian troops towards Novaya Kamenka-Chervony Yar (Kherson Region). The enemy succeeded in wedging into the defence of Russian units near Sukhanovo (Kherson Region). Russian command that involved armoured reserve forces and organised ambush operation that caused considerable casualties among enemy units and made Ukrainian units to escape disorderly. The positions along the frontline have been completely recovered.