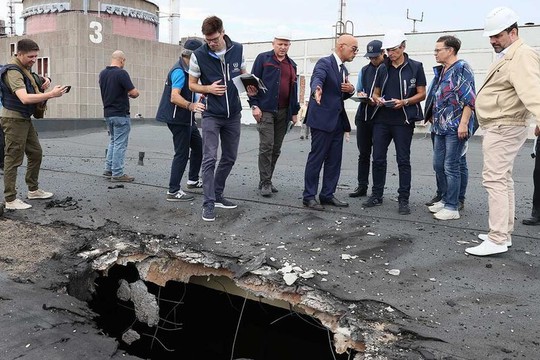 The physical integrity of the Zaporizhzhya Nuclear Power Plant “has been violated due to shelling”, Rafael Grossi, IAEA Director General, stated to journalists upon his arrival in Vienna.

- Local authorities in Zaporozhye reported renewed shelling of the Zaporozhye Nuclear Power Plant (ZNPP) by Armed Forces of Ukraine (AFU) after the IAEA head Rafael Grossi’s visit there was over.

Ukrainian artillery targeted ZNPP and the city of Energodar once again, local Administration member Vladimir Rogov said on September 2-nd night. Four rounds impacted the area of plant, Rogov announced, with at least one heavy projectile exploded between reactors N 2 and N 3, while three struck about 400 meters to the east.

The shelling has cut the main power line along the Dnepr river, so the ZNPP had to divert emergency power for its own operational needs. After the attack all electricity supplies from ZNPP to the rest of Ukraine stopped. Around 20 Ukrainian shells hit Energodar city where ZNPP is located.

- The renewed attack came after the departure of the main International Atomic Energy Agency (IAEA) mission, which visited the plant on September 1st. However, IAEA Director General Rafael Grossi told reporters the same day in Vienna that “six of the agency’s experts stayed behind in Energodar”. Four of them “will return soon” (already retured) and two will remain “permanently” there at the plant, - Grossi clarified.

“If something happens or if any limitation comes, they are going to be reporting it to us. It’s no longer a matter of A said this and B said the contrary,” Grossi noted. “For those who may have intentions on the plant, knowing that international inspectors are there, witnessing and informing immediately what is happening, has, I think, an inherent very important stabilizing effect.”

Meanwhile, the Ukrainian General Staff admitted for the first time that it were “troops uncontrolled by Kiev” that have shelled the area of ZNPP.

- Two groups of a total of 42 motor boats with over 250 Ukrainian servicemen from Special Operations Forces and foreign mercenaries on board made another attempt to disembark at the shore of Kakhovka Reservoir near Energodar and Dneproprudnoye. Their main mission was to capture ZNPP when the IAEA left back to its HQ in Vienna. The other task was to remove Russian National Guard units from the plant, and to use it as a much deadlier nuclear blackmail source.

In this case the latest attacking force was four times larger than the AFU group that tried to attack ZNPP September 1-st. It was  destroyed by Russian National Guard units maintaining security at the nuclear power plant.

The Ukrainian manpower this time was attacked by four Su-30 and two Ka-52 helicopters of Russian Aerospace Forces that has resulted in the elimination of 20 boats. The rest of the vessels turned back and headed towards the Ukrainian coast.

According to available information, the latest unsuccessful provocation of Ukrainian nationalists has resulted in the elimination of 47 militants, including 10 foreign mercenaries, as well as in wounding 23.

- The Ukrainian military is suffering heavy casualties as it tried to retake territories seized earlier by Russian forces in southern Ukraine, Russian Defense Minister Sergey Shoigu has said at a special meeting of the MoD leadership.

The minister went on to note that the counteroffensive had been planned by Ukrainian President Vladimir Zelensky’s office “solely to create the illusion before the Western backers that the Ukrainian military is able to conduct an offensive.” But Kiev is not able to do this, and will not be able to achieve any success in the future.