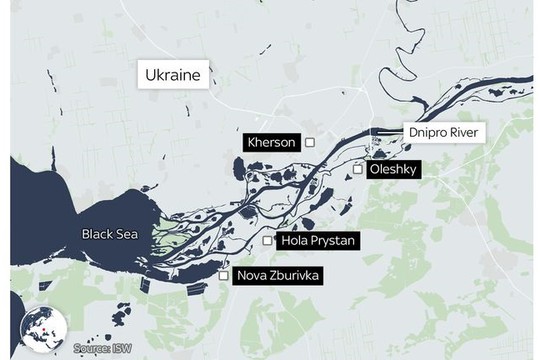 - Russian MoD chief orders redeploy troops from the right bank of the Dnieper to the left. It is reported that if the Kiev regime resorts to a larger water discharge from reservoirs or a more powerful rocket attack on the Kakhovka dam, this will create a flow of water flooding vast areas and causing civilian casualties.

Russian Defense Minister Sergey Shoigu has ordered to start redeploy troops behind the Dnieper River. "Start withdrawing the troops and take all measures to ensure the safe relocation of the personnel, armaments and hardware behind the Dnieper," the defense chief said, setting the task for Commander of Russia’s Integrated Group of Forces in Ukraine Army General Sergey Surovikin.

Defense along the Dnieper barrier frontier is the most expedient option of operations in the zone of the special military operation, Surovikin said. "I understand that this is a very uneasy decision. At the same time, we will preserve, which is the most important thing, the lives of our servicemen and, as a whole, the combat capability of the group of forces, which is inexpedient to be kept in a limited area on the right bank. In addition, this will release a part of forces and capabilities that will be involved in active operations, including for offensives in other directions in the zone of the operation," the general reported.

- President Vladimir Putin met with historians and representatives of Russia’s traditional religions. Here are some of his remarks made on Ukraine:

“For decades after the collapse of the Soviet Union, Ukraine experienced direct, overt interference from Western countries in its internal affairs. Actually, they tried to do the same in Russia, but, unfortunately, in Ukraine they managed to instill in the minds of millions of people the pseudo-values that led to the fact that they created an anti-Russia on this territory, sowing hatred, raping people's consciousness, depriving them of their true history. Everything was done to reshape the consciousness of millions, and they very skillfully tried to light the fuse to cause the fall of our country…

The clash with the neo-Nazi regime in Ukraine  with NATO behind it – was inevitable, and had Russia not taken action in February, it would have been the same, only from a worse position for us. The situation in Ukraine was brought on by its so-called ‘friends’ to the point where it became deadly for Russia and suicidal for the Ukrainian people themselves. And we see this even in the nature of the hostilities – it is amazing what is happening there; it is as if the Ukrainian people do not exist, they are thrown into the furnace, and that is it…

Efforts to weaken, tear apart and destroy Russia are also ongoing. They underlie the developments in Ukraine. We will never let this happen. We will defend our Fatherland the way our heroic ancestors did.”

- The administration of US President Joe Biden has rebuffed Kiev’s requests to provide it with state-of-the-art drones over concerns that doing so could escalate the Ukraine conflict, the Wall Street Journal reported.

According to US officials and people familiar with matter interviewed by the newspaper, the US won’t send the Gray Eagle MQ-1C drones to Ukraine that it has been requesting for months. This type of military aid, they said, could “signal to Moscow that the US was providing weapons that could target positions inside Russia.”

US officials also worry that the technology used in the drones, particularly the cameras, could fall into the wrong hands, the report says.

- Hungary will not provide money for an EU loan for Ukraine in the amount of 18 billion euros. This was stated by Hungarian Foreign Minister Peter Szijjarto. “We are ready to continue financial support on a bilateral basis, on the basis of a bilateral agreement between Ukraine and Hungary. But we, of course, will not support any common EU borrowing in this area,” - the head of the Hungarian diplomatic service clarified.