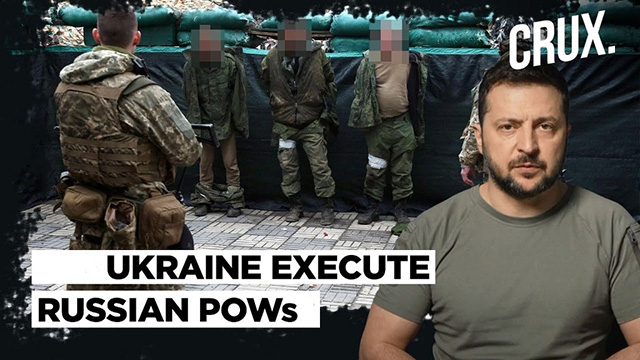 - Russian State Duma, the lower House of the Russian Federal Parliament, unanimously adopted the statement calling on the parliaments of the countries of the world to unambiguously condemn the crimes of the Kiev regime:

”…Another bloody crime committed by the Kiev regime: the shooting of Russian servicemen who had been taken as prisoners of war. The cold-blooded murderers who opened fire on unarmed, lying prisoners were so confident of their impunity that they videotaped their crimes. The footage of the sadistic massacre, which became public, once again confirmed the Nazi nature of the Kiev government, which has long encouraged murder, torture and mockery of civilians and prisoners of war (POWs).

During the debate the Deputies promised to punish not only the killers of these POW, but the commanders of the killers, including the C-in-C of the Ukrainian AF as well.

Kremlin spokesman Dmitry Peskov told reporters: "Of course, Russia will search for those who committed this crime on its own. They must be found and punished."

Vyacheslav Volodin, the head of the State Duma said that such crimes are being done by fascists, and president Zelensky should be sent to a special tribunal.

Russia has sent a letter to UN Secretary-General Antonio Guterres on the issue of inhumane treatment of Russian POWs by Ukraine and asked the top official to circulate it as an official document of the UN Security Council and General Assembly.

UN Spokesperson Farhan Haq said the same day that the United Nations was calling for a full investigation of all reported human rights violations in the context of more than ten brutally executed Russian POWs by the Ukrainian side.

"It looks like most of them were shot in the head," Dr. Rohini Haar, medical adviser at Physicians for Human Rights, told the newspaper, adding "There are pools of blood. That indicates that they were just left there dead. There appears to have been no effort to pick them up or help them." They’re considered hors de combat, or noncombatants — effectively prisoners of war, the medical adviser stressed.

- Meanwhile the Kiev regime continued its provocations aimed at creating a possible technological disaster at Zaporozhye Nuclear Power Plant (ZNPP). It did so on November 19 and 20, 2022. The Russian MoD said totally twenty-five shells were fired at the plant during these two days.

The IAEA team that is monitoring the situation on the ground, said that “more than a dozen blasts were heard within a short period of time” on Sunday, November 20. It added that experts could see some of the explosions from their windows.