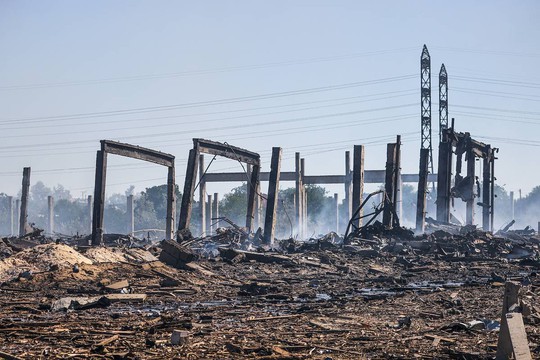 - Novaya Kakhovka located in Kherson Region has been heavily shelled by Armed Forces of Ukraine who used U.S. HIMARS. A local official said that during this inhumane attack five people were killed and at least 90 injured. Some  are said to have been buried under the rubbles. A kindergarten, hospital, church and a market place were also damaged. Local officials labelled such barbaric act as an act of terrorism.

- It has been reliably established that Ukrainian nationalists are preparing yet another cynical provocation with civilian deaths in Slavyansk in Donetsk People's Republic to accuse the Russian Armed Forces of carrying out indiscriminate strikes against civilian targets. For this purpose, residents of nearby residential quarters are being held in the building of the Vocational Agrarian Lyceum (Nauka Street) under the pretext of allegedly ensuring security. The building is mined and the militants plan to blow it up when Russian troops launch artillery strikes on military targets in the city.

- Russia emphasized once again that in carrying out the tasks of the special military operation, the Armed Forces of the Russian Federation treat the local population humanely and do not strike at civilian infrastructure facilities, unlike the Ukrainian armed formations.

- In total, since the beginning of the special military operation, 2,481,664 people have already been evacuated to Russia according to their will and desire, of which 390,578 are children. More than 9,500 temporary accommodation centres continue to operate in the regions of the Russian Federation.

- So far, more than 45,000 tons of basic necessities, food and medicines have been prepared at the collection points. 42,450.9 tons of humanitarian cargo have already been delivered to Ukraine since March 2, 2022.

- Russian Defence Ministry monitors and records by name all foreign mercenaries who have arrived in Ukraine to take part in combat operations. Over the past three weeks, the number of mercenaries in Ukraine has decreased from 3,221 to 2,741 as a result of the offensive actions of the units of the Russian Armed Forces and people's militia of Lugansk and Donetsk Republics. During this time, despite the arrival of another 151 mercenaries, 391 militants have been killed. Another 240 "wild geese" rushed to flee outside Ukraine.

- Russian MoD reminded that under International Humanitarian Law, all foreign mercenaries are non-combatants. The best option that awaits them if captured alive is a trial and maximum terms of imprisonment.

- According to the U.S. correspondent Mike Glenn (The Washington Times, Sunday, July 10, 2022), the U.S. has provided Ukraine with 12 High Mobility Artillery Rocket Systems (HIMARS) and ammo; 126 M-777 howitzers of 155mm and more than 400,000 rounds; 20 Soviet-era Mi-17 helicopters; more than 6,500 Javelin anti-armor missiles; and more than 700 Switchblade tactical unmanned aerial systems. (Comment: 20 Soviet-era Mi-17 helicopters has been stolen by the USA from Afghanistan in violation of the relevant Afghan-Russian contract that prohibited to use these choppers by other states).