Ukrainian chronicle: UK Special Services continue to provoke an aggravation of the situation near the Black Sea 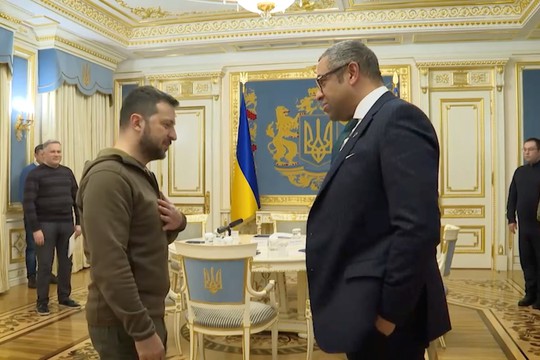 - Russian precision attacks against Ukrainian infrastructure are a necessary response to Ukrainian sabotage on Russian soil, including the bombing of the Crimean Bridge, President Vladimir Putin told German Chancellor Olaf Scholz. The two leaders spoke by phone at Berlin’s request.

Putin explained the logic behind Russia’s military operation against Ukraine which has started military aggression against Donbass in 2014 and later against Russia in 2022, and stated that the Western policy of arming and training Ukrainian troops was “destructive.”

“It was noted that the Russian Armed Forces had been refraining from conducting precision missile strikes on certain targets in the Ukrainian territory for a long time, but now such measures have become necessary and unavoidable as a reaction to Kiev’s provocative attacks on Russian civilian infrastructure, including the Crimean Bridge and energy facilities.” The “terrorist attack” against the Nord Stream undersea pipelines “stands in the same category” and requires a transparent investigation that would include Russia, Putin told the German leader.

- Belarusian and Russian troops will act as a unified force. The two countries don’t want war, but are preparing to “repel any aggression, - Belarusian President Alexander Lukashenko has announced amid heightened tensions with the West over the Ukraine large-scale aggression against Donbass in 2014 and later against Russia in 2022. “Today we are preparing like a single force, a single army,” Lukashenko said, adding that instructors from both countries were training each other’s troops.

Lukashenko underlined that the situation around Belarusian border is 'tense'. The country’s security agencies have registered an increase in the number of "provocations."

- Russian Defense Minister Sergey Shoigu called Belarus a “trustworthy partner” for Russia during a meeting with Viktor Khrenin, his Belarusian counterpart. Two ministers signed a revised version of a Regional Security Treaty between the two governments on December 3.

- Western European states are creating a dangerous situation by trying to exclude Russian and Belarus from the continent’s security order, Russian Foreign Minister Sergey Lavrov warned. He accused EU leaders of allowing the US to dictate policy, and surrendering their own interests to Washington, and claimed that EU policy is creating insecurity on the continent. The West “is already trying to build a security architecture [in Europe] without Russia and Belarus. We don’t need such security,” Lavrov said. “The whole security [architecture] in Europe now comes down to it being completely subservient to the USA,” he claimed.

- Kiev plotting provocation on ammonia transit from Russia. The grain deal, as a part of a UN- and Turkey-brokered agreement that unblocked exports of Ukrainian grain and Russian fertilizers in the Black Sea, did not reportedly cover exports of Russian ammonia via the Tolyatti-Odessa pipeline. However, earlier, a UN-aid chief said that the ammonia deal would likely be reached by the end of the week.

Kiev  has been given a free passage of its grain deliveries abroad via the Black Sea under the multilateral deal reached last July, but is plotting a provocation to subvert the UN initiative on resumption of Russia's ammonia transit abroad free of charge.

Guided by UK Special Services, and with help from Canada’s private military company (PMC) GardaWorld, the provocation is to echo the blasts carried out at Nord Stream pipelines in the Baltic Sea. The goal, like in the case of the September 2022 sabotage at the pipelines, is to prevent Russia from exporting its resources to other countries.