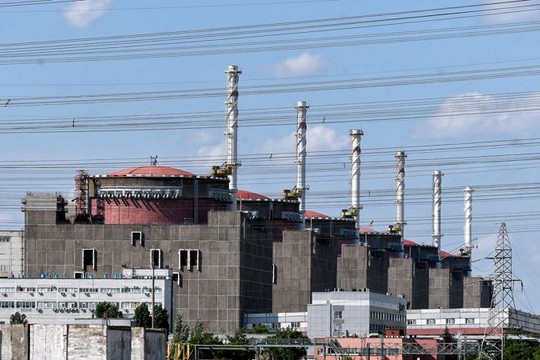 - Armed Forces of Ukraine (AFU) used the kamikaze drone near operational Zaporozhye nuclear power plant (NPP) – the biggest in Europe, now controlled by Russian troops. In addition, one more drone was eliminated by the Russian air defense systems near the heating water utility in the city of Energodar, military-civilian Administration spokesman said later on July 12-th. This is not the first provocation of the Kiev regime at radiation-hazardous facilities. It endangers millions of Ukrainian citizens and not only them. The purpose of the attack was to prevent the visit the International Atomic Energy Agency delegation to the Zaporozhye NPP or to create a radioactive disaster.

- Russian Defence Minister, Army General Sergei Shoigu visited Russian troops’ main Command and Control Center. He gave necessary instructions for intensifying the activity of Russian troops at all fronts in order to prevent massive missile and artillery attacks launched by the Kiev regime at civilian infrastructure facilities, population of Donbass and other regions.

- Quadripartite consultations on the issue of unblocking Ukrainian ports intentionally blocked by Kiev for the export of agricultural products were held by UN representatives, Russia, Turkey and Ukraine in Istanbul. Russia has proposed measures to ensure the transportation of food to foreign countries alongside with the measures to prevent the use of these logistic chains for supplying the Kiev regime with weapons and military equipment and to prevent provocations. Meanwhile, 70 foreign vessels from 16 countries remain blocked by Kiev in six Ukrainian ports, namely Kherson, Nikolaev, Chernomorsk, Ochakov, Odessa and Yuzhniy.

- Independent Donetsk-based journalist Alina Lipp of Germany details her prosecution by the German state for violating new speech codes through her reporting from the Donetsk People’s Republic. As the only German reporter on the ground in Donetsk, Lipp has exposed Ukrainian forces shelling civilians, attacking a maternity ward, mining harbors, and bombing a granary filled with corn for export. She faces three years in prison if she returns to her home country.

- Hidden US bio-laboratories have been found in the liberated towns of Rubizhne and Severodonetsk. What is inside the laboratories is not yet known – explosives technicians are currently working on the site, after which investigators and forensic specialists will go inside.

- The Israeli government announced that it would send helmets, flak jackets, gas masks and other protective gear to Ukraine. Israel, however, has so far refused to supply Kiev with offensive weapons or impose sanctions on Moscow.

- Washington has not only supplied long-range High Mobility Artillery Rocket Systems (HIMARS) to Kiev, but is providing intelligence on targets in Donbass and has even “unofficially” sent instructors to Ukraine to help with the hardware, the Russian Foreign Ministry claimed on July 14.

- Two civilians have lost their lives, with another six sustaining injuries, as a result of Ukrainian shelling of the city of Donetsk, local authorities reported on July 14.  The leader of the Donetsk People’s Republic (DPR), Denis Pushilin, said that the Ukrainian military had hit a bus terminal. A US-supplied М777 howitzer had been used in the attack against an area where there are no military installations. One howitzer has been captured during the fight. It will be carefully studied in Moscow.