Ukrainian chronicle: US-made HIMARS destroy and being destroyed themselves 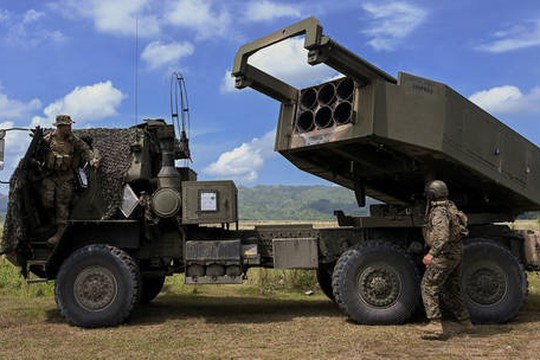 - 63 Russian troops have been killed by a Ukrainian missile strike, Moscow confirmed on January 2. The bombardment hit a temporary vocational school used by the Russian forces in Donbass. The facility located in the city of Makeevka in Russia’s Donetsk People’s Republic located near Donetsk was targeted by missiles from US-supplied HIMARS multiple rocket launchers (photo), the Defense Ministry said.

At the same time US-made HIMARS have been destroyed by Russian strikes. Russian forces have destroyed several US-supplied HIMARS rocket launchers and eliminated scores of Ukrainian troops along with dozens of foreign fighters in the latest series of strikes, Moscow’s Defense Ministry said on January 3. In addition, nine HIMARS rockets were intercepted near the frontline in the Lugansk People’s Republic (LPR), as well as in Kherson Region, the statement clarified.

The Russian Air Force’s “precision strikes” on positions of the “foreign legion” fighting for Ukraine near Kramatorsk and Maslyakovka destroyed over 130 “foreign mercenaries,” it added.

- Russia’s Foreign Ministry earlier condemned Washington for not only supplying sophisticated weapons to Kiev, but also providing the Ukrainian military with intelligence about the location of the Russian forces. It was also said that the AFU attackers used U.S. intelligence communication system called “Echelon”.

A commentator Terry Ross noted at the RT website: Russia must now target a US command and control centre in Kiev as it is clear to all that this strike was planned and executed by the US.

- Russian long-range aviation will continue to have a role in the Special Military Operation in Ukraine in 2023 and will have to master new upgrades to the fleet, Lieutenant General Sergey Kobylash, head of the Long-range Air Command, has said on January 2. The planned operational and combat training program for this year includes “the use of airborne means of destruction, ”he added.

Russia’s long-range aviation – which is part of the country’s nuclear triad, but can also carry conventional arms – currently relies on three types of aircraft, including the Tu-95MS and Tu-160 strategic missile carrier, and the Tu-22M3 long-range bomber.

- There can be "no nuances" when it comes to the glorification of WWII Nazi collaborator Stepan Bandera in Ukraine, Polish Prime Minister Mateusz Morawiecki told a press conference on January 2. Warsaw would not show any leniency to those who "do not want" to recognize "terrible crimes" committed by Ukrainian nationalists against Poles during WWII, he added.

"We are extremely critical, very, very negative towards any glorification or even reminders of Bandera," Morawiecki said, commenting on a Twitter post by the Ukrainian parliament, the Verkhovnaya Rada, celebrating what would have been the 114th birthday of the head of the Organization of Ukrainian Nationalists (OUN), an ultranationalist group that existed during WWII and had its own paramilitary wing, known as the Ukrainian Insurgent Army (UPA).

There will be no "leniency" for those who refuse to admit that the "terrible genocide" Poles suffered at the hands of the Ukrainian nationalists during WWII was "something unimaginable," Morawiecki added.

Bandera has been officially hailed as a national hero in Ukraine since 2010. Ukrainian nationalists regularly marked his January 1st birthday with torchlit marches and massive demonstrations. Poland and Israel associate him with the mass killings of Poles and Jews committed by Ukrainian nationalists during the WWII.

Despite such criticism, Poland at the same time ranks second in supplying its active regular servicemen under the guise of ‘mercenaries’ to take part in direct combined aggression of Ukraine and NATO against Russia.

So far 1,200 Poles have been killed and nearly 4,000 of them have been injured during joint Ukrainian-NATO aggression against Donbass since April 13, 2014, and later – since October 5, 2022 – against Russia.