Ukrainian chronicle: USA on the verge of becoming а party to the Ukrainian conflict 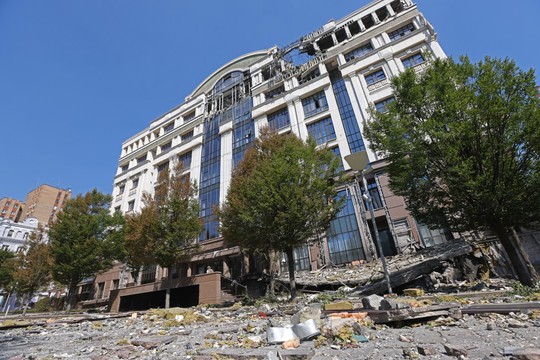 - Ukrainian troops have shelled residential buildings in Donetsk using NATO-supplied 155mm caliber artillery, city officials claimed on August 22. An apartment complex in the capital of the Donetsk People’s Republic (DPR) “took a direct hit,” Mayor Alexey Kulemzin wrote on Telegram. Three civilians were killed, he added. On August 23 AFU again shelled Donetsk by using U.S. M142 HIMARS and long-range artillery. Four civilians have been killed and ten were injured. The Office of the head of the DPR Administration has been hit. Nobody has been hurt.

- “We’d like to avoid a situation, in which the US becomes a party to the conflict, but so far we don’t see any readiness of the other side to take these warnings seriously,” Russia’s deputy Foreign Minister Sergey Ryabkov told Rossiya 1 TV channel. “The ever more obvious and deeper involvement in Ukraine in terms of countering our military operation, in fact, puts this country, the US, on the verge of turning into a party to the conflict,” he reiterated.

- An unnamed official from the Biden administration told Politico on August 18 that the White House had no problem with Ukraine attacking Crimea, which became part of Russia after a 2014 referendum staged in response to a violent coup d’etat. The USA believes that Kiev can strike any target on its territory,” the American official insisted.

- Kiev openly declared itself the successor of Ukrainian nationalists. This was stated by Sergei Shoigu, Russian Defence Minister, at the First International Anti-Fascist Congress. “The Verkhovna Rada [Ukrainian Parliament] proclaimed the OUN-UPA fighters for national independence. After the collapse of the USSR, Washington did everything to create Ukraine as an antipode of Russia”, he added. These Ukrainian organizations have been recognized as extremist and banned on the territory of Russia by decision of the Supreme Court of the Russian Federation.

- In 2019, Spanish correspondent Ethel Bonet from El Confidencial shared her impressions of the paramilitary children's camp “Leader” near Kiev: “Eight-year-old Victoria seems to be an ordinary girl. And her dreams for the future can hardly be called very different from those of her peers: she dreams of becoming a fashion designer. Or maybe a model when she grows up. But the little girl already feels like a soldier. Her instructors explain this to her. Those either who have been in battles against the ‘pro-Russian separatists’ or who have taken part in sabotage operations by the Ukrainian armed forces in the self-proclaimed Donetsk and Lugansk republics.” There are dozens of such children's military camps in Ukraine.

- The Ukrainian economy is expected to plunge by 40% this year, according to S&P Global Ratings, which raised the country’s foreign currency sovereign credit ratings, added that Kiev had completed a distressed debt restructuring. S&P warned that “given the ongoing conflict with Russia, Ukraine’s ability to stay current on its debt is highly dependent on factors largely outside of government control.” Earlier this month the agency lowered Ukraine’s ratings to ‘selective default’ and ‘restricted default’, respectively, saying the country’s debt restructuring was seen as distressed.

- Former speaker of the Verkhovna Rada Dmytro Razumkov has assured that stealing Russian transit gas is legal. Kiev should start confiscating the gas that Russia supplies to Europe through the territory of Ukraine and sell it independently to the union, - Dmytro Razumkov said on Facebook. He opined that the gas belongs to Russia as long as it does not cross the EU border, which means it is subject to Ukrainian legislation on the confiscation of Russian assets. “The gas that is transported through the territory of Ukraine, it is Russian. Up to the border with Europe it is Russian gas. And what do we do under the law? We can confiscate it,” Razumkov wrote.

- The U.S. Department of State has called on Americans to leave the territory of Ukraine as soon as possible. A statement issued to this effect was published on 23 August, 2022 on the official website of the American Embassy in Kiev [source:  https://ua.usembassy.gov/security-alert-u-s-embassy-kyiv-ukraine-6/?utm_source=yxnews&utm_medium=desktop]. It is noted that the situation throughout Ukraine remains unstable and may deteriorate “without warning”.