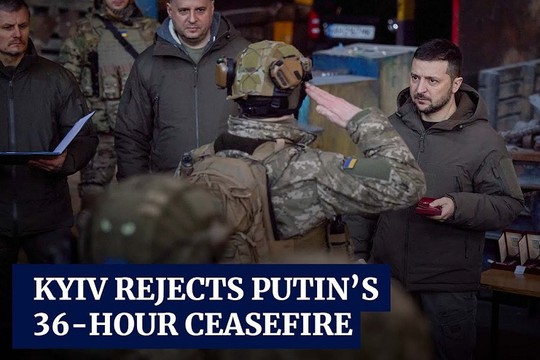 - President Vladimir Putin’s ceasefire initiative was issued on January 5 after a respective appeal made by Patriarch Kirill, the leader of the Russian Orthodox Church. “We  call upon the Ukrainian side to proclaim a cessation of hostilities and give them [Orthodox Christians] the opportunity to attend services on Christmas Eve and on Christmas Day,” -  the Kremlin statement reads.

Russia intended to observe the truce together with Ukraine for 36 hours, from 12:00 local time on January 6 until midnight on January 7.

- The Russian truce has been radically rejected by Kiev, with Ukrainian President Zelensky describing the proposal as a military ruse.

- Ukrainian forces have continued their shelling attacks on civilian settlements and the positions of Russian forces in Donbass, notwithstanding the Russian side's adherence to the Orthodox Christmas ceasefire. A dozen of civilians were injured. The Donetsk People's Republic's mission to the Joint Center for Control and Coordination of issues documenting shelling attacks said that Donetsk had been shelled with 155mm NATO-caliber shells three times on January 6 in two hours after the unilateral Russian ceasefire entered into force.

Ukraine has de facto violated such Russian offer several times after 12:00 AM on January 6 when the truce was to commence, if it has been accepted by Kiev

- Instead of accepting it, Washington and some of its Western allies, including Germany and France, have offered more armor, with Paris agreeing to send several AMX-10 armored fighting vehicles and Berlin announcing future shipments of the comparable Marder vehicle. With intention to see more casualties amongst Ukrainians and Russians.